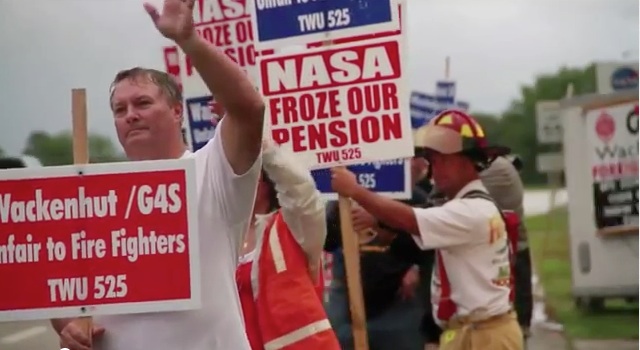 Outside the Kennedy Space Center, NASA firefighters in TWU Local 525 protest benefit cuts; they hope Congress will take up their cause.

This week, photos of NASA engineers joyously celebrating their successful Mars rover mission went viral on the Internet. However, for another set of NASA workers--the firefighters at NASA’s Kennedy Space Center in Florida--there has been little joy in the face of imminent slashes to their retirement benefits by NASA contractor G4S.

Last year, G4S, the third largest employer in the world (and the troubled provider of security for the London Olympics), took over the contract to provide firefighting services at NASA’s Kennedy Space Center. G4S continued to employ the 90 firefighters who worked there but demanded contract concessions. For the last year the firefighters have been working under the terms of their previous contract, as negotiated by their union, Transport Workers Union Local 525. But now that the year is coming to an end, G4S is pushing for steep cuts.

Upon taking over the contracts last November, G4S immediately froze the firefighters' pensions and converted them from a defined pension plan to a 401(k). Now, in negotiations with workers, G4S wants to double workers' out-of-pocket medical expenses. The company also proposes an 80 percent reduction in its contributions to the firefighters' retirement plan, forcing workers to pay more out of their own paychecks. The company’s new retirement scheme would cut workers’ retirement income by a minimum of 30 percent, and possibly more for workers who have been there fewer years. Retirement is an important issue for firefighters, who typically retire in their early 50s because of their physically demanding jobs.

“Firemen are walking off [the job] because they are disgusted by [the benefit cuts]. They are finding jobs in other places. Firemen go to work where they know there is a decent wage and they can retire,” says TWU Local 525 President Kevin Smith. “Now the company is giving them such a terrible package that there is no way they can retire like normal firefighters across the country.”

G4S refused to respond to interview requests, saying it could not comment on ongoing negotiations "other than to say that we continue to negotiate with the Transport Workers Union to work towards a successful resolution.“

However, according to TWU Local 525, G4S has said at the bargaining table that the cuts are necessary in order for them to make a profit on the contract, since they can't get additional money from NASA.“In a lot of contracts, you have a vehicle to get equitable adjustments to meet contract costs. This is a fixed price contract and there is no way to get an adjustment,” explains TWU Local 525 President Kevin Smith.

However, NASA has refused to get involved in the negotiations, saying that legally they cannot do so as a neutral third party.

“I am upset with NASA,” says Smith. "They accepted the bid, so they are responsible for it, but they have no way to fix it. They have a fault with no remedy.”

For now, workers are stepping up their militancy in an attempt to engage NASA. The union firefighters are picketing Kennedy Space Center twice a day, five days a week, demanding simply to maintain the contract they currently have.

“If we don’t stand up to them and fight them, all the other shops are coming through behind us on negotiations,“ says David McGaha, a paramedic and firefighter. “Before you know we are going to be working for minimum wage with no benefits."

Despite the ongoing picketing, Smith remains pessimistic that the union by itself can successfully pressure NASA to clean up the mess.

“I am certainly not a big enough person to put pressure on NASA," says Smith. "I have been picketing them for three years and I’m getting nowhere. It’s going to take a Senator or President Obama to step up.”

“NASA last year awarded a new $152 million dollar, fixed-price contract with Chenega Security & Support Solutions to provide protective services at the Kennedy Space Center. The company is now negotiating a future benefits package with its contract workforce and we look forward to a fair and equitable resolution of these talks. For those workers who had pensions under the previous contract, they will see no change in their benefits, and NASA will fully meet its financial obligations to cover the costs of those benefits. We value the important protective services these employees provide, and look forward to a timely and equitable resolution of this matter.”

In other words, NASA will honor pension payouts for workers who paid in under the previous contract, but will still not be involved in current negotiations.

The previous day, a fire broke out at Kennedy when the project Morpheus lander exploded during a test fight. Firefighters extinguished the flames and no one was hurt.