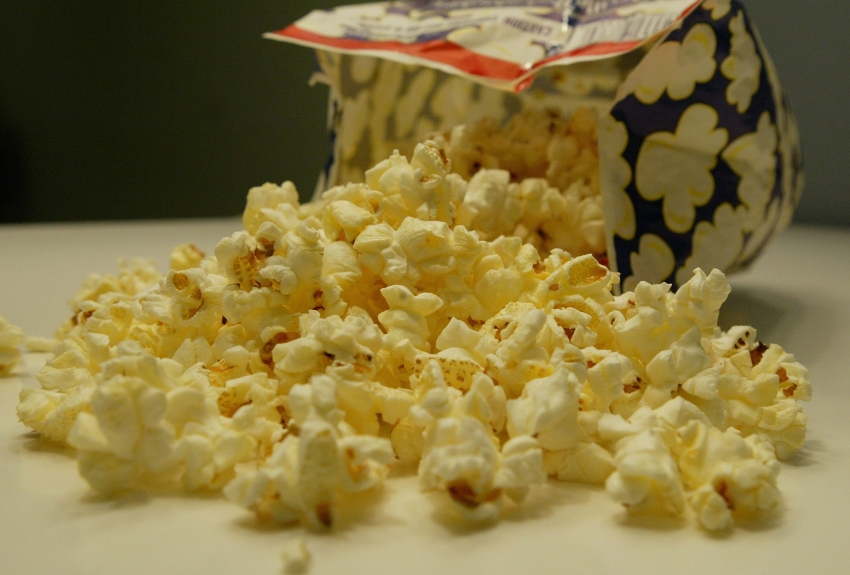 The aroma of hot buttered popcorn evokes all sorts of childhood nostalgia, but for many workers, those savory vapors pose a modern industrial health hazard.

Evidence has been building over the years of a respiratory illness primarily afflicting factory workers exposed to the microwave-popcorn butter flavorant, diacetyl (DA). Now, researchers have discovered another potential hazard related to DA: long-term risk of Alzheimer's disease.

Researchers with the University of Minnesota’s Center for Drug Design studied the effect of the “ubiquitous butter-ﬂavoring agent” and detected an association with “long-term neurological toxicity,” particularly among industrial workers who are smothered in the stuff every day.

The federal government has in recent years urged the industry to limit potentially toxic workplace exposures to DA, but it has not defined an explicit regulatory exposure limit. Federal authorities have published advisories for employers to control DA exposure, but like many chemicals wafting across the country’s assembly lines and pervading our processed foods, DA (and similar chemical substitutes) are still amply used, with little restriction on behalf of public health.

Dr. Swati More, one of the study’s authors, says the findings should raise concerns that, in addition to posing respiratory risks, DA exposure “may lead to brain deterioration. The question that needs to be answered is, how much of diacetyl does one need to consume and for how long.”

Though the University of Minnesota study focuses on long-term effects related to beta-amyloid protein clumping in the brain, and was conducted at only the cellular level (not on humans), it adds to a growing body of research on the toxic impacts linked to DA exposure. Academic, media and government investigations have revealed both anecdotal and epidemiological evidence of “popcorn lung.”

The main occupational health issue surrounding popcorn lung, which has been acknowledged by the National Institute for Occupational Safety and Health (NIOSH), is bronchiolitis obliterans. (There is also some evidence of respiratory risk for extreme popcorn eaters.)

An extensive 2006 investigation by the Baltimore Sun's Andrew Schneider revealed the potential health harms linked to DA exposure at workplaces. On top of the buttery scourge, which could impact many thousands nationwide, was the barrier of intimidation that workers felt under the pressure of their bosses:

The difficulty of assessing workplace illness is further complicated by employees who fear reprisal for complaining about hazards to anyone and by physicians who lack the training to recognize bronchiolitis obliterans and other occupational threats. ....

Their wellbeing falls to physicians, scientists and industrial hygienists trained in occupational medicine, which is the study of workplace hazards -- chemical and otherwise. They are the ones who have linked lung disease to exposure to flavorings.

The report notes that efforts to protect workers were constrained by the industry’s tight grip over the regulatory regime. DA was among the many chemicals that the FDA labeled as “Generally Regarded as Safe,” but according to the Sun, “[The FDA] took the word of a panel of scientists hired by the Flavor and Extract Manufacturing Association. Diacetyl was declared safe decades ago because the industry said it was safe, according to a spokesman for the FDA.”

This kind of bureaucratic opacity trickles down to the workers on the factory floor in a devastating way. A 2007 Washington Post story described a worker from a California flavoring factory, Irma Ortiz, who was crippled by the mysterious illness:

Ortiz kept working until one day in December 2005 when she felt, she said, "I put all my strength into the job and I can't do no more."...

"Before, I used to do a lot of exercise. I ran from place to place," she said, her sentences broken into panting phrases as if she were hiking a steep hill. Now, she does not like to be in public because long, body-shaking coughing fits could overcome her at any time. ...

They are waiting for a lung transplant. "I was perfectly fine when I started," Ortiz said. "I want to be the same. But my doctor says I'm not going to be the same."

While the regulatory process on the federal level has stagnated, California has moved ahead by issuing a rule on occupational flavoring exposures.

Dr. Celeste Monforton, a professor at the Department of Environmental & Occupational Health at George Washington University, says the latest research on the popcorn-Alzheimer's connection is not likely to spur further federal action on popcorn flavoring, as regulators are already focused (though still largely inactive) on the larger epidemiological studies on respiratory effects due to workplace exposures. But Monforton, who has worked with scientific colleagues to press for stronger regulation of DA, sees the results as further proof of how industrial chemicals shape people’s health in ways that researchers have only begun to explore.

“We have this regulatory system, or market system, that basically says, ‘We can expose people to whatever the hell we want, and then, if we find out something’s bad about it, some smart researchers out there will figure out what it’s going to do to you,’” Monforton says.

The diacetyl dilemma, she adds, “is probably one of the worst-best examples of how screwed up our worker protection system is.”