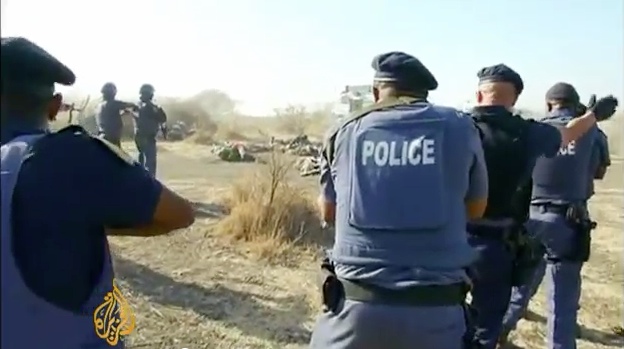 Screenshot from a video of police opening fire on striking miners in South Africa, which went viral on the Internet Thursday.

Yesterday in Marikana, South Africa, at least 34 striking miners were shot dead by police and another 78 were wounded. The incident, which was caught on tape, occurred as police were attempting to clear striking miners from a hilltop outside of the Lonmin mine. In response to authorities firing stun grenades and tear gas, a number of miners began to charge. Without warning, dozens of officers opened fire with automatic weapons.

It is unclear how many of the miners were actually carrying clubs or machetes as they surged forward. There are allegations that some miners were firing at the police, which are hard to substantiate since the police were firing non-lethal munitions—stun guns and tear gas—at the time of the charge, obscuring the scene. But based on the footage, the hundreds of rounds fired at protesters appear starkly disproportionate to the threat posed by men wielding clubs.

Instead of focusing on whether the police used excessive force, the South African media has been quick to claim the incident stemmed from violent clashes earlier in the week between two rival unions.

The government-backed National Union of Mineworkers (NUM) faces competition for members from the Association of Construction and Mineworkers Union, a newer union formed by disgruntled NUM members who say the NUM was too concessionary and was resistant to change from within. In 2007, the NUM refused to allow a disgruntled rank-and-file worker to challenge the head of the NUM, on the grounds that the worker was merely an employee and not already an elected official. The more militant ACMU claims to have already surpassed NUM in membership.

At the mine in Marikana, NUM represented approximately 30 percent of the workers, while another 30 percent were represented by the ACMU. Some 3,000 rock drill operators belonging to both unions walked out on August 10 in a strike for better conditions. The NUM cut a deal with mine management and wanted to return to work this week—but told media that they felt they couldn’t because of ACMU interference.

Earlier this week, 10 people were killed in clashes between the ACMU and the NUM, including two police officers. ACMU’s general secretary, Jeffrey Mphahlele, said the conflict between the two unions began with NUM members shooting ACMU members. The more radical ACMU has said that the NUM routinely engages in violence when challenged by ACMU at a mine, in order to scare workers tempted to defect.

The NUM disputes these claims and says that ACMU started the incident. It has also blamed the mine owners, saying on its Twitter account today that, “the background of the violence at Lonmin lies in the companies undermining the bargaining process and structures.”

The shootings happened yesterday when police attempted to clear the hillside of striking miners from both unions. ACMU leaders say that part of the reason that miners refused to leave the hill was because that day, the company had at the last second reneged on a deal with ACMU that would have ended the strike. ACMU President Joseph Mathunjwa told the Mail and Guardian that he pleaded with the miners to abandon the hillside, fearing for their safety at the hands of the police: “I said leave this place, they’re going to kill you.”

The Association of Construction and Mineworkers Union has placed the blame for the massacre, in which 34 have been confirmed dead, at the hands of the mine management, the police and the NUM. The National Union of Mineworkers, however, has stood behind the police. “The police were patient, but these people were extremely armed with dangerous weapons,” NUM General Secretary Frans Baleni told Kaya FM.

NUM's collusion with the state is symptomatic of power structures in South African since the end of apartheid. The 300,000-member NUM is the largest affiliate of the Congress of South African Trade Unions, which forms the “tripartite” governing alliance along with the ruling African National Congress and the South African Communist Party.

The union was founded in 1982 and eventually won an end to a racist reservation system, which denied black South Africans access to better-paying jobs. The ANC, similarly, earned international praise and recognition during its battle against apartheid, which culminated in its victory in South Africa's first democratic election with universal adult suffrage in 1994. Since then the ANC has dominated politics in the country. But allegations of corruption and waste have dogged the party. For many, it has come to symbolize the unfulfilled promises of the national liberation struggle.

The response from the ANC's President Jacob Zuma, himself a self-described socialist with trade union roots, was muted. He merely expressed “regret” for the killings, adding that “today is not an occasion for blame, finger-pointing or recrimination.”

Richard Trumka, president of the AFL-CIO in the U.S., told  In These Times: "Once again, mineworkers who produce so much wealth under often dangerous daily working conditions have paid the highest price--their lives--in a completely avoidable industrial conflict. We send our deepest condolences to the families of these workers and call on the South African government to take immediate action to address the brutality."

Ultimately, the primary responsibility for these clashes hangs with neither union, but with the company and the state that endorses these conditions. South African miners work in a dangerous environment and face constant exploitation while earning only a pittance, even though demand has soared for the platinum they extract. This year alone, 40 miners have died in South Africa.

The strike was a natural outcrop of these conditions and is not likely to fade away without significant redress. But even if a settlement is reached, another blow has been dealt to the legacy of the once-proud African National Congress and its allies in the trade union movement.

The political consequences could be lasting.