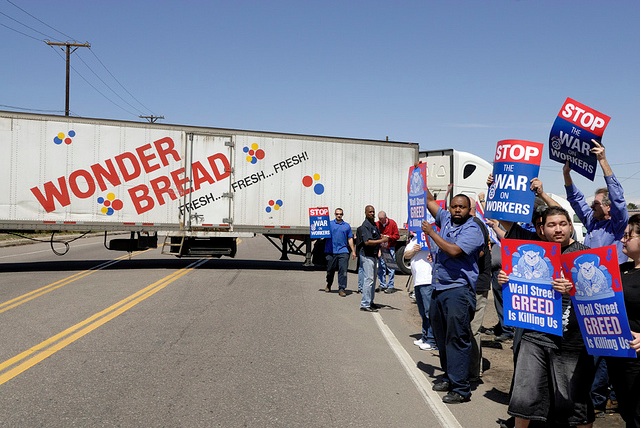 A long standoff between the Teamsters and the corporate managers at Hostess Brands may be nearing a resolution. Rank-and-file union members will begin voting next week on a new labor agreement containing dramatic concessions.

Teamsters secretary-treasurer Ken Hall announced late last week that the union had received a “last, best and final offer” from the company–famed for making products like Wonder Bread and Twinkies–and that some 7,500 Teamster members employed at Hostess will vote directly on the proposal. Mail ballots will be sent out next week and the returned ballots counted on Sept. 14, Hall said.

The vote is the latest development in a seven-month standoff between the Teamsters and Hostess, which filed a Chapter 11 bankruptcy petition in January and demanded sweeping concessions from its unionized workforce. Failure by the Teamsters and several other unions to agree to the concessions will mean the final collapse of Hostess and the loss of all 17,000 jobs at the company, Hostess officials have said.

That the cuts will be painful is clear, although the Teamsters are withholding the full details pending the vote. Hostess CEO Gregory Rayburn sent out a letter to employees August 20 estimating that--for all workers, including management--wages would be cut by 8 percent next year and givebacks in health care insurance would further reduce overall income. The proposal would also erase millions in pensions owed to workers and relieve the company of any requirement to make pension fund contributions for the next three years.

“I would never sign this piece of crap,” says Frank Hurt, president of the Bakery, Confectionery, Tobacco Workers and Grain Millers union (BCTGM), the second-largest labor organization at Hostess after the Teamsters.

Hurt says he met with Hostess managers as recently as last week, and they are demanding that BCTGM agree to a very similar concessionary package. “They keep giving us new proposals and each one is even worse than the last,” Hurt says.

Despite Hurt’s strong feelings, the approximately 5,000 rank-and-file BCTGM members at Hostess may also get a chance to vote directly on the cuts. “I’ve told the members that they would have the final say. They’ll have a right to vote on a final proposal, if Hostess ever offers one,” he told Working In These Times.

Should BCTGM reject such a proposal, however, Hostess need not abide by their vote. Company lawyers have convinced federal bankruptcy Judge Robert Drain to grant a so-called Section 1113 motion against the union, which allows the company to unilaterally cancel BCTGM labor agreements and impose whatever conditions it wishes. But the company has decided not to invoke Section 1113 thus far, claiming that it would prefer a negotiated settlement with the union.

Hostess sought a similar decision from Judge Drain in April relative to the Teamster contracts but was unsuccessful. However, the court ruled on narrow technical grounds and made clear that Hostess was welcome to return to court and try again to bust the union. Indeed, an analysis of the decision by bankruptcy experts at the anti-union law firm Cadwalader, Wickersham  & Taft concluded that Judge Drain’s ruling “turned on a relatively minor point of fact” and that Hostess had a good chance of prevailing against the Teamsters in the future.

All the unions at Hostess find themselves hemmed in by a hostile employer on one side and a hostile bankruptcy court on the other, comments Randy Bellliel, director of field operations for the Retail, Wholesale and Department Store Union (RWDSU).  With only about 500 members at the company, RWDSU does not have as much at stake as the Teamsters or BCTGM, but union officials are nevertheless trying to do everything possible to protect the wages and benefits of members, Belliel says.

It may be more ominous for the company's future that experienced Hostess managers have been leaving steadily since the bankruptcy court filing in January, Belliel says. Without such managers, it’s difficult to see how the company can repair its finances and continue operations. “We’re concerned that management has been jumping ship. I don’t know if that means it’s a dead ship,” he says.

BCTGM’s Hurt voices similar concerns. “I can’t help but get the feeling that they want to liquidate and have done with it….They already want me to agree to sell off a big piece (of the company) in the South and get rid of our people there,” he says.

The concern is that Hostess is attempting a Bain Capital-style dismemberment--in which the owners publicly profess a desire to turn the company around, but simultaneously pursue the goal of shedding liabilities in anticipation of selling the assets for a quick profit, Hurt says. Key to that goal would be eliminating the outstanding debts to the various pension funds for union members, as the proposed contract does.

Teamster leader Hall seemed to recognize all this in an August 16 statement announcing the rank-and-file ratification vote. “We recognize there is no desirable choice–this is one of the most difficult circumstances we’ve encountered,” the union stated.

Because the Hostess offer is so bad, union leaders “cannot endorse the company’s final offer,” according to Hall. However bad, the proposal is being offered to the members for a vote because “the likely consequence of rejecting outright means the loss of your jobs,” Hall stated.