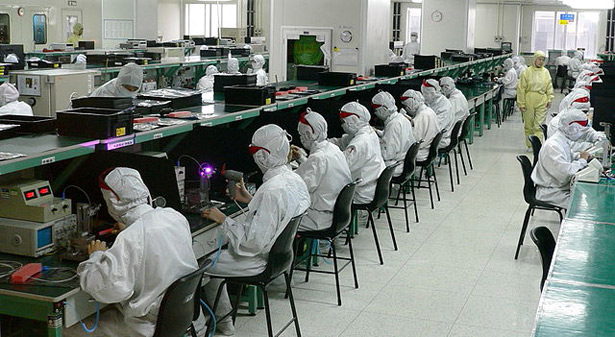 Apple has changed the way their production facilities are run, but the reforms only go so deep.   (Steve Jurvetson/Wikimedia/Creative Commons)

Apple wants you to know it’s working hard to fix the biggest bruise on its reputation: the treatment of workers in its vast production chain. So for the past several months, the company has partnered with the Fair Labor Association, a mainstream watchdog group, to audit factory conditions at Apple's most notorious supplier company, Foxconn. FLA says in its "remediation verification" report that Foxconn has tightened oversight of its ultra-efficient machine.

But the changes have mostly aimed to clean up some of the excesses of Apple's labor system without shifting its fundamental structure.

The FLA audited three of the Taiwan-based company’s facilities, Guanlan, Longhua and Chengdu, and called for 360 remedial actions, 284 of which had been officially completed by the factories as of the end of May. The remaining 76 actions are due by July 2013. The report highlighted progress on regulation of the company's internship program and reforms on workplace health and safety (responding to longstanding controversy over stressful working conditions that activists blame for mental despair and several worker suicides).

Many physical changes to improve worker health and safety have been made since the investigation, including the enforcement of ergonomic breaks, changing the design of workers’ equipment to guard against repetitive stress injuries, updating of maintenance policies to ensure equipment is working properly, and testing of emergency protective equipment like eyewashes and sprinklers. Foxconn has also engaged consultants to provide health and safety training for all employees.

However, even with these changes, the core of Foxconn's labor problems remains unresolved: the tension between workers' economic desperation and their need for basic protections from exploitation. In part, this is because neither the FLA nor even Apple can fully address the underlying forces that push workers to insane levels of production. Although labor unrest has intensified in recent years, there currently is no institutional counterweight in the Chinese labor force--no government regulator, international monitor, or union that will hold the line on workers rights against the pressure of global consumerism.

The Hong Kong-based rights group Students and Scholars Against Corporate Misbehavior (SACOM) warned that “most of the actions completed by Foxconn are changes at the policy level only, but few substantial changes in labour practices were found at this stage."

FLA admits one of the “most challenging” reform issues at Foxconn's facilities (which collectively employ some 178,000 workers) is the tension between the need for a sustainable income and the right to humane working hours. FLA has set a goal for factories to eventually comply with “the Chinese legal limit of 40 hours per week plus an average of 9 hours of overtime per week" while still "protecting worker pay.” SACOM’s and other groups' independent investigations suggest that workers have regularly faced pressure to work well beyond 60 hours. (Patterns of abuses at Foxconn have been well documented by watchdogs, despite the controversy sparked by fictionalized accounts by dramatist Mike Daisey.)

According to a SACOM report published earlier this year on Foxconn workers in Zhengzhou and Shenzhen, a woman working at the Longhua campus refused overtime work on a Saturday and paid a heavy cost:

Her supervisor did not approve it, but Chen did not go to work on that day. She was asked to move 3,000 boxes a day during the work shift as punishment. The punishment lasted for 10 days. On the first day, she suffered from backache and could not sleep at all.

And since the volume of work is a function of both hours and wages, nominal “protections” limiting hours may cut deep into income unless they come with a comparable pay raise. SACOM activist Debby Chan told In These Times that overtime is an indispensable supplement to meager incomes:

As the basic salary of Foxconn is not sufficient for living, workers always yearn to have overtime work so they can have a higher income from the overtime premiums. ... SACOM [repeatedly] demands Foxconn provide a living wage for workers so they don't have to work excessive overtime.

Recently ZDNet reported that due to anticipated reduction of hours, some Foxconn workers may simply switch to new jobs at one of the countless other companies without such restrictions.

The New York-based advocacy group China Labor Watch argued that condensing schedules per the FLA report has increased the “intensity of the hourly work":

According to our follow-up investigation, the workers have to complete the workload of 66 hours before within 60 hours now per week. As a result, the workers get lower wages but have to work much harder and they are not satisfied with the current situation.

In a follow-up correspondence with In These Times, CLW Executive Director Li Qiang said, “The factory is transferring the cost onto the workers. Those factors caused the resigning of the workers.”

Moreover, FLA’s monitoring covers a tiny sample of the Foxconn-Apple empire. CLW, which has investigated various Apple-affiliated manufacturers besides Foxconn, notes that “It is Apple’’s entire supply chain system that should be [held] responsible for the squeezing of workers.”

So if Apple is unwilling to fundamentally revamp its whole supply chain, and Foxconn is tweaking factory conditions but not the wage system, where will the solution come from? Perhaps someone should ask Foxconn workers themselves: Do they need a representative body (not the Party-run union apparatus) that allows workers to advocate for themselves, set the terms of their labor, give them freedom to collectively bargain for meaningful reforms without sacrificing precious income? Foxconn workers still lack a truly independent, worker-led labor union. According to SACOM’s research, there is an overall lack of communication between labor and management, and “workers are kept in the dark about the company’s remedial action plan.”

The best factory inspectors may be the workers themselves: After all, they toil on the assembly line all day, not just during spot checks. They know when they’re denied breaks or shorted on wages, and they’re experts on the fine distinction between work and exploitation. All they need is the power to call their boss out.