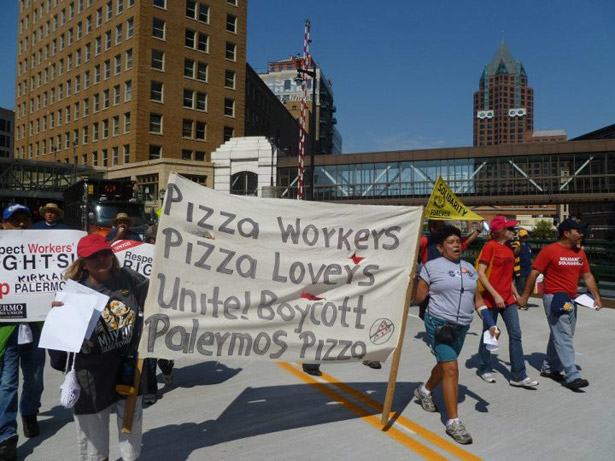 Palermo's Pizza is starting to feel the heat after workers struck and organized a boycott of the company for going after immigrant workers.   (Photo by Brian Rothgery/Supporting Striking Palermo's Workers)

Three months into a bitter strike and four weeks into a national boycott, the CEO of Palermo’s Pizza met Friday with AFL-CIO President Richard Trumka in Washington, DC. The National Labor Relations Board (NLRB) is investigating allegations that the Milwaukee pizza company used immigration status as a pretext for the mass firing of striking workers. While the legal process has been repeatedly delayed, Friday’s meeting--which was requested by Palermo’s--suggests that the consumer campaign is taking a toll on the company. Both sides said they appreciated the chance to meet, but the escalating dispute remains unresolved.

As I’ve reported, workers first struck Palermo’s Pizza’s factory in Milwaukee on May 29, after the company refused to recognize their union despite signatures from three-quarters of the factory’s permanent workers. The same day, Palermo’s told many workers that they had 28 days to prove that their immigration status authorized them to work in the United States. Over the next two days, Palermo’s announced the deadline had been shortened to 10 days, more workers went on strike, and the union filed with the NLRB both a petition for a union election and charges alleging Unfair Labor Practices by the company. On June 7, Immigration and Customs Enforcement (ICE) announced that it was suspending enforcement at Palermo’s. The next day, the company terminated 75 workers.

Reached over e-mail, AFL-CIO spokesperson Josh Goldstein said that Trumka “appreciated the opportunity” to “discuss the issues facing the workers” with CEO Giacomo Fallucca. “The workers at Palermo,” said Goldstein, “are eager to be part of a solution that creates a healthy business, addresses the workplace problems and ensures that their voices will be heard and respected.” He added that the boycott “continues until there is a resolution,” but the labor federation hopes “that the open dialogue today helps pave the way for Mr. Fallucca to continue it with his employees when he returns.”

“It was characterized to me as being a very good meeting,” says Palermo’s Marketing Director Chris Dresselhuys. “We’re just thankful [Trumka] could make the time to see us.” Dresselhuys says the company sought the meeting because it “thought it was in everyone’s best interest that Mr. Trumka understand the circumstances surrounding our situation.” Asked whether he believed that had been accomplished, he answered, “I couldn’t tell you. I wasn’t there.”

The workers have been organizing for years, working closely with the Milwaukee-based immigrant rights group and low-wage workers' center Voces de la Frontera. In April, they met with representatives of the United Steelworkers (USW) and the AFL-CIO, of which the USW is an affiliate. The workers filed for union recognition as the Palermo’s Workers Union (PWU), and in July workers voted to pursue affiliation with the USW international union should they win union recognition. (Full Disclosure: the USW is an In These Times sponsor.) The United Food and Commercial Workers filed with the NLRB in June to appear on the ballot as an alternative to the PWU.

Voces de la Frontera credited Friday’s meeting to the pressure from the ongoing strike and a consumer boycott of Palermo’s products. Palermo’s workers launched the boycott on July 29 at a rally with the United States Students Association held outside a local Costco. The supermarket chain sells the majority of Palermo’s products, and so has been the primary target of the boycott. Interviewed in Spanish soon after the boycott launch, fired striker Caesar Hernandez said, “We want people to know all the problems that we’ve had with the company, and all the abuses and mistreatment that workers have suffered.”

The national AFL-CIO formally endorsed the boycott on August 9. In a statement that day, Trumka said that the workers’ “courage and strength are a model for working people around the country whose rights are being violated and voices silenced.”

Two days later, union members and allies held demonstrations outside Costco locations in 11 cities, distributing flyers to customers or sending delegations inside to seek meetings with local management. Within a week, Fallucca wrote to Trumka to request a meeting. According to the AFL-CIO, Fallucca’s letter suggested that Costco had contacted Palermo’s about the issue.

Asked about the boycott, Palermo’s Dresselhuys said, “Our sales and our relationship with our customers remain strong.” He said the union’s NLRB charges “center around Palermo’s complying with immigration law.”

Costco maintains a supplier Code of Conduct which states that it “expects its suppliers to comply, at a minimum, with the applicable labor and environmental laws and regulations,” and pledges to “seek to utilize” companies that also “demonstrate a continuing commitment to the protection and improvement of employees’ rights, safety and the environment.”

“Basically,” says Neumann-Ortiz, “[Costco is] saying that any product that they sell is not violating workers’ rights. We think obviously that the policies, the kinds of practices that Palermo’s has initiated are very, very egregious, and certainly anti-worker.” Costco did not respond to a request for comment.

The PWU last week held a week of action which included mobilizations at Costcos in more than 20 cities. That included Costco headquarters in Washington state, where United Students Against Sweatshops members attempted to deliver a letter to Costco’s CEO.

Neumann-Ortiz describes Palermo’s CEO's meeting with Trumka as a sign that the pressure is working. “The next step,” she says, is for management “to talk to the workers, which they have refused to do over many years, in terms of just sitting at the table with them.” Asked whether Palermo’s would take that step, Dresselhuys replied, “There are two unions currently scheduled in this election, and the only legal remedy is for the workers to vote and make their choice.”

Given the gravity of the allegations against Palermo’s and the size of the pro-union majority that signed the spring NLRB petition, Neumann-Ortiz says that Palermo’s should voluntarily recognize the union, reinstate the fired workers, and proceed to negotiations, rather than insisting on an NLRB election tainted by terminations. “When you fire half of the production plant,” she adds, “you cannot say you’re being neutral or fair in an election.”

Voces and the USW are asking that the NLRB issue a bargaining order, compelling Palermo’s to recognize and negotiate with the union. Such orders are rare (an NLRB spokesperson says tthe agency does not maintain a count of how many have been issued), and have often been overturned by courts.

“It is our position that Voces de la Frontera is intentionally blocking the vote,” says Dresselhuys, “and we believe it’s time that the workers’ voices be heard, and be given a chance to speak for themselves and determine what they want.”

In December 2011, the U.S. Department of Labor and ICE signed a Memorandum of Understanding under which (with exceptions) ICE would “refrain from engaging in civil worksite enforcement activities at a worksite that is the subject of an existing DOL investigation of a labor dispute” during a “DOL investigation and any related proceeding.”

Neumann-Ortiz calls Dresselhuys' claim “a ridiculous argument,” noting that the letter was issued in response to a request regarding “the existing labor conflict at Palermo, not a future labor conflict.” She also charged that at the same time Palermo’s was “standing up on their high horse, saying ‘we’re simply complying with the law,’ ” the company has “been telling people, ‘If you don’t support the strike, if you don’t support the union, bring me new papers,’” and keep your job.

No NLRB ruling is expected for several weeks. The legal timeline has repeatedly been extended: in June, by the UFCW filing to appear on the election ballot; in July, by the Palermo Worker’s Union filing additional charges against Palermo’s; and most recently, on August 16, by an additional round of charges by the PWU against both Palermo’s and the temp agency it employed. Under U.S. labor law, the NLRB generally holds off on conducting a union election until it deems legitimate charges of illegal anti-union activity to have been resolved or remedied (unless the union bringing the charges files a motion for the election to proceed anyway).

Voces and the USW told Working In These Times in July that the delay created by the UFCW’s filing meant that fewer strikers, and more replacement workers, would be eligible to vote in an election. Last week, NLRB Regional Director Irv Gottschalk told the Milwaukee Business Journal that the question of which current or fired workers would be eligible to vote in a potential election would depend in part on the results of the agency's investigation.

Reached over e-mail, UFCW Local 1473 President John Eiden said, “The workers should be provided the opportunity to partake in democracy in the workplace through an NLRB election. The UFCW is committed to the process and the effective representation of all food workers, including those at Palermo’s.”

The USW is an AFL-CIO affiliate; the UFCW is one of four unions in the Change to Win federation. The UFCW represents some Costco employees, as does another Change to Win affiliate, the International Brotherhood of Teamsters. A spokesperson for the Teamsters declined to comment on the Palermo’s campaign or the boycott.

In a sworn affidavit prepared as part of his NLRB testimony, striker Daniel Caamano said (in Spanish) that the company took a less punitive approach to immigration issues with some who had chosen not to go on strike. He said that two workers told him that “the company told them that they could continue working at the company, but they would need to change their papers, and that they could maintain their seniority and their wages, but they would have to work with different names.” In her own affidavit, Rosa Mercado said (in Spanish) that she was told by someone from the staffing agency, regarding her termination, that “if it wasn’t because of my social security number, it was because I was out picketing on Friday.”

“We have given that company everything we have to give,” says Hernandez, “to let this company grow as big as it has. I believe that we deserve respect from them. And we’re not asking for anything more than justice.”