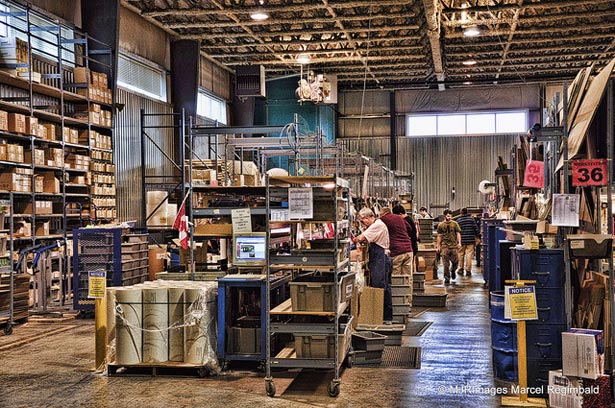 A lawsuit filed by Warehouse Workers United says that unrealistic productivity quotas have led to a higher rate of injuries in American warehouses.   (Photo by: Marcel Regimbald/Flickr/Creative Commons)

Working In These Times has frequently covered the warehousing industry and the way that complicated layers of different companies using, owning, operating and staffing warehouses make the sector ripe for labor abuse.

Last October, workers affiliated with the group Warehouse Workers United filed a class action lawsuit in U.S. district court in California alleging labor law violations at Mira Loma warehouses operated solely for Wal-Mart stores. The lawsuit names Schneider Logistics Inc. (SLI) and its subsidiary Schneider Logistics Transloading and Distribution (STLD) along with the companies Impact and Premier, which hired people to staff the warehouses. Schneider took over operation of the warehouses in 2006.

Plaintiffs bring this action on behalf of themselves and others similarly situated to recover the wages that defendants stole — and are continuing to steal — from them in violation of federal and California law. Plaintiffs also seek redress for other consequences of defendants’ unlawful conspiracy, including defendants’ wrongful scheme to hide and then cover up the extent of their wrongdoing by failing to keep mandatory payroll records, falsifying records of hours worked and compensation owed, and concealing, denying and/or misrepresenting to the workers the amount of their earnings and on what basis these earnings were calculated.

A key question is whether Schneider or STLD directly employed--and is therefore responsible for the working conditions of--the plaintiffs, including lead plaintiff Everardo Carrillo. The plaintiffs allege that Schneider is their “joint employer” along with the other defendants.

Schneider Logistics initially argued that it had “no connection with or responsibility for the operation, oversight, or supervision” of the workers at the Mira Loma warehouses, as quoted in the recent motion. It notes that Schneider Logistics Secretary-Treasurer Amy Schilling signed a sworn declaration saying the company had “no business or contractual relationship” with co-defendants Impact and Premier. And the motion alleges that Schneider sought to continue this image by failing to turn over documents during the discovery process that would have indicated otherwise.

In April Schneider attorneys responded to a discovery request without actually looking for the requested documents, according to the motion. In other words, they allegedly were either sloppy or intentionally avoided turning over evidence to which the plaintiffs have a legal right.

This became clear when documents turned over by Impact and Premier included highly relevant Schneider documents which Schneider attorneys had specifically said did not exist. The motion notes:

Schneider has now produced thousands of documents it previously claimed did not exist, including over 12,100 pages of personnel files it maintained for the Impact and Premier class members (whom it claims not to jointly employ), and the workplace rules and training requirements it imposed on all class members.

The plaintiffs say the new documents show that “Schneider’s top managers knowingly made material false statements” to the court, including claims that the warehouse employees are not subject to Schneider employment policies and that Schneider does not keep personnel files on them or set productivity quotas. The documents showed that Schilling herself signed contracts with Premier and Impact, on behalf of STLD and “its affiliates.” Meanwhile, Schilling is also vice president and controller of Schneider National, the parent company of the other Schneider groups, which actually negotiated the contracts with Impact and Premier.

The federal district judge, Christina Snyder, wrote in a preliminary injunction ruling that the “contracts dictate nearly every material term of plaintiffs’ employment including how Impact and PWV (Premier) must conduct pre-employment screening and new employment training.”

The documents also showed that, contrary to Redgrave’s previous testimony, Schneider did set specific productivity quotas for the warehouse workers and in fact complained to Premier when the rate of cases unloaded per hour dropped. Schneider officials also talked about how to remedy Impact’s “low productivity levels.”

Warehouse worker groups have long argued that unrealistic and escalating productivity quotas are among the things that lead to high chronic and acute injury rates in warehouses. In July, Warehouse Workers United filed a complaint with California’s Occupational Safety and Health Administration office.

The recent motion also alleges that Schneider or its attorneys did not order employees to preserve emails relevant to the case, as is standard required legal procedure. It says the company has an automatic delete email function for emails from the Mira Loma warehouses, meaning emails are deleted automatically after a short period of time, and employees also have “absolute discretion” over whether to save or delete emails. The motion says Schneider was slow to issue a memo instating a “litigation hold”—meaning employees should preserve relevant communications. And it alleges even after such a memo was issued, Schneider never enforced it.

The motion also alleges that Schneider destroyed and denied the existence of security camera footage that would aid the plaintiffs’ case. The motion demands that Schneider turn over video footage and also a log of any video that has been destroyed since October 2011.

Overall, the lawsuit is part of WWU’s and individual workers’ ongoing campaign to improve conditions in warehouses and shed light on the complicated employment structure that allows major companies like Wal-Mart to benefit from the low-paid, dangerous work of a largely temporary workforce.