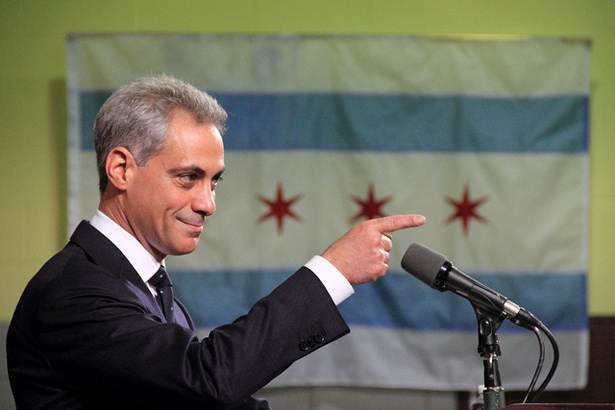 Chicago Mayor Rahm Emanuel is taking the hardline with the city's teachers' union and eschewing the negotiation table for a DNC speaking slot.   (Photo by: Daniel O'Neill/Flickr/Creative Commons)

With Chicago Public Schools teachers set to strike next Monday, Chicago Mayor Rahm Emanuel isn't sitting at the bargaining table trying to hammer out a deal. Instead, he's in Charlotte, North Carolina, at the Democratic National Convention, where he'll be delivering a prime-time address this evening, despite telling the Chicago Sun-Times in late August that he would be willing to cancel the high-profile appearance in order to secure a deal with teachers.

The Chicago Teachers Union (CTU) is upset that Emanuel is speaking at the DNC at a time when, they say, he has engaged in bad-faith bargaining aimed at busting their union.

“The mayor’s appearance at the DNC is ironic," says CTU spokeswoman Stephanie Galdin. "Democratic mayors, like Emanuel, have led an unprecedented attack on organized labor and with a prolific focus on teacher unions. As he extols the virtues of democracy in Charlotte, his education policies have led to rampant job loss and the destabilization and destruction of neighborhood schools in Chicago. By suppressing evidence, manipulating data and controlling the discourse about our public schools, he has created a false narrative that seeks to undermine public education and vilify parents, teachers and students.”

The CTU is currently getting ready to strike after Emanuel and the city's Board of Education have refused to meet most of their demands. Though a major hurdle was overcome in July when Emanuel backed down from his demand that teachers work a longer day without a commensurate pay raise, the union still wants the raises that were promised in their last contract but which Emanuel ultimately rescinded, as well as contract language that eliminates the ability of the Chicago Public School system to fire teachers without cause.

“CPS seems determined to have a toxic relationship with its employees,” said CTU President Karen Lewis in a statement announcing the strike. “They denied us our 4 percent raises when there was money in the budget to honor our agreement; they attempted to ram a poorly thought out longer school day down our throats; and, on top of that, they want us to teach a new curriculum and be ready to be evaluated based on how well our students do on a standardized test. It has been insult after insult after insult. Enough is enough.”

At a Labor Day rally that drew 18,000 people in support of CTU, Lewis referred to Emanuel as a “liar and a bully” for the way that he has dealt with CPS students and teachers. Neither Mayor Emanuel’s office nor the Democratic National Committee responded to requests for comment about why Emanuel was speaking at the DNC.

Emanuel’s speaking role at the DNC is additionally ironic since he has worked with Tea Party groups in his attacks on the CTU. Prominent Tea Party activist Andrew Marcus has bragged about working with Emanuel to take on the unions in Chicago. A Marcus-directed film, A Tale of Two Missions, features interviews with Mayor Emanuel. The CTU recently released a 24-minute video, “Chicago Teachers Union vs. Astroturf Billionaires,” that outlines the various Tea Party and Koch-funded groups that Emanuel has worked with in his battle with the CTU.

The prominent spot for Emanuel at the DNC raises questions once more about just how committed the Democratic Party is to organized labor.