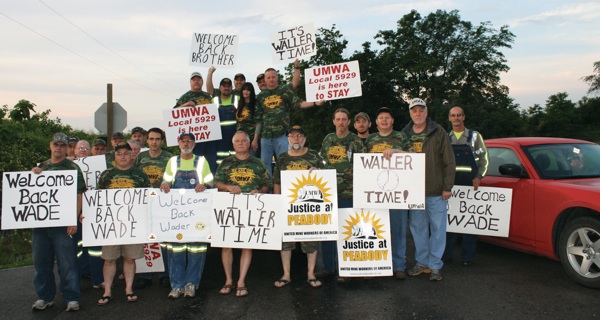 Friends and co-workers welcome Willow Lake miner Wade Waller (center, second row) back to work. He was fired for advocating UMWA representation at the Peabody Energy-owned mine, but reinstated by court order.   (Butch Oldham, UMWA)

Workers at the Willow Lake coal mine in southern Illinois are now represented by the United Mine Workers of America (UMWA) after the National Labor Relations Board (NLRB) certified the union’s victory in a rank-and-file election.

The National Labor Relations Board (NLRB) published a notice of its certification on September 4, following a lengthy series of administrative delays and legal actions. UMWA won a closely fought representation election on May 20, 2011, at the mine in rural Equality, Ill., about 150 miles east of St. Louis, Mo.

UMWA President Cecil Roberts called on the owner of the mine, Peabody Energy Corp., to quit stalling and negotiate a new contract for the 440 miners and production worker represented by the union. “It’s long past time for...Peabody Energy to finally accept the rule of law, sit down with its workers and negotiate a fair and equitable contract,” Roberts stated in a September 6 press release.

Peabody is the largest coal producer in the world, with extensive mining operations in the United States and Australia. Headquartered in St. Louis, Mo., it reported “record-setting financial performance” of $1.02 billion in profits last year, according to a statement from Peabody CEO Greg Boyce.

The NLRB’s action last week comes in the wake of a major court victory for labor against Peabody and its subsidiary, Big Ridge Inc. On April 30, U.S. District Court Judge G. Patrick Murphy ordered the company to cease an illegal anti-union campaign against the UMWA, and to reinstate Wade Waller, an outspoken Big Ridge employee who had been fired for supporting the union.

In issuing his order, Judge Murphy recounted the history of the UMWA organizing drive at Willow Lake. He stated that “Big Ridge proceeded to conduct a vigorous ant-union campaign” at about the same time that the UMWA sought a representation election at the mine.

“Big Ridge held a series of group meetings with employees, which included slide shows, films, and presentations by officials of Peabody Energy. ... Big Ridge distributed flyers with employee paychecks, mailed letters and videotapes to employees’ homes, and made anti-union stickers available for employees to wear on their hardhats,” Judge Murphy’s wrote. The decision also noted the company "directed supervisors to make one-on-one contact with employees to encourage them to vote against UMWA representation.”

Despite the anti-union campaign, the UMWA prevailed in the election in a narrow vote of 219-206, according to NLRB records. But the company challenged the vote and fired Waller, a seven-year employee of Big Ridge with an outstanding work record. The only credible explanation for the firing, Judge Murphy determined, was that Waller “was one of the strongest and most outspoken UMWA supporters at the Willow Lake mine.”

Since the court action in favor of the union and Waller, Peabody has refused to begin contract talks, says UMWA Director of Communications Phil Smith. The NLRB’s recent certification of the union has not changed that, he says, and union lawyers will not be surprised if Peabody seeks a court appeal and further delay.

Meanwhile, UMWA faces a challenge from Peabody on an entirely different front.

According to UMWA, Peabody is abusing the legal process so as to avoid paying out millions in health care benefits that it owes to more than 20,000 former Peabody employees, retirees and family members.

In 2007, Peabody created a new company, Patriot Coal Corp., to operate most of its unionized coal mines in Appalachia. As part of the deal, Patriot assumed the liabilities for healthcare benefits for thousand of former Peabody employees and retirees, in addition to benefits for many dependents, UMWA said.

But in July, Patriot filed a Chapter 11 bankruptcy petition in federal court, saying it could no longer sustain its healthcare costs, which it estimated might exceed $100 million this year.

UMWA’s Roberts has charged that the spinoff of Patriot and the subsequent bankruptcy are both part of a deliberate attempt by Peabody to avoid paying the benefits that are due to union members and their families.

On Aug. 30, Roberts kicked off a new “Fight for Fairness at Patriot” campaign at a mass meeting of 3,000 union miners in Charleston, West Va. “We are prepared to go to he mat over this. This is an enormous challenge to our union,” Roberts told local reporters.