Australia Seeks to ‘Manage’ the Poor While Making Them Poorer 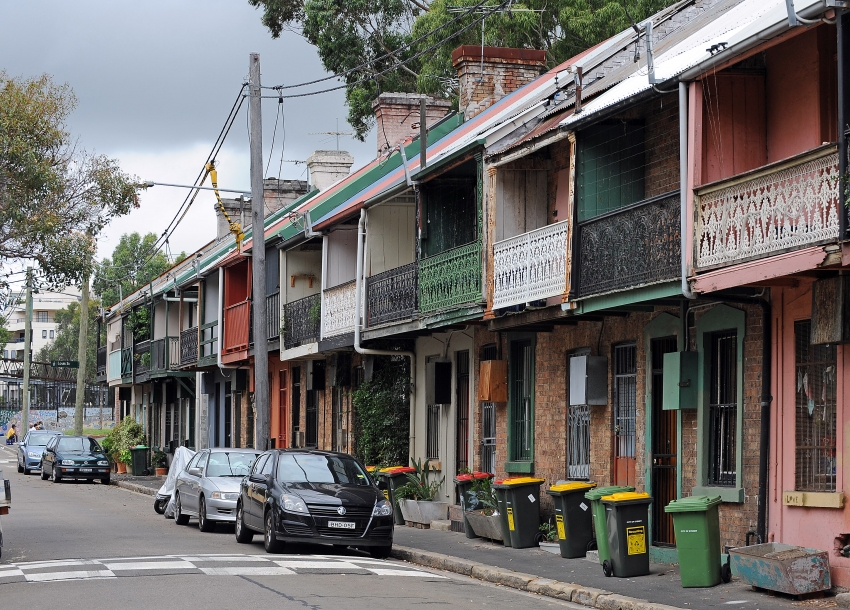 These terrace apartments in Sydney, Australia--known as 'The Block'--are the home to many impoverished Aborigines, who now face the indignity of an Income Management program.   Torsten Blackwood/AFP/Getty Images

When Mitt Romney derides the legions of Americans who are supposedly utterly dependent on government and are ruining the country's entrepreneurial spirit, we should remember that while this disdain for the poor may have a uniquely American inflection, the greed-is-good ethos flourishes in other rich nations. In the land down under, we see a mirror image of the political establishment's frontal assault on poor communities, with welfare policy acting as a cudgel for blaming the epidemic of poverty on the poor themselves.

The Australian government has been tightening its grip on welfare benefits through the Income Management program, which essentially dictates how the poor should spend their benefits. Participants may have about 50 to 70 percent of their money placed under state control, reserved for essential items like food.

Like welfare reform in the United States, this is retrofitted paternalism: participants must spend the "quarantined" money using a “Basics Card” at government-approved outlets. The rationale is that too many poor people would squander money on gambling, drinking, pornography and other unproductive things when given a chance.

The program was first piloted in destitute aboriginal communities that had become notorious for cases of family crisis and child abuse. Income Management is now spreading to several new areas, according to the Australian Council of Social Services (ACOSS), with enrollment based on “referral from child protection authorities” and referrals from social workers “on the grounds of ‘vulnerability.’ " The targeting of these already stigmatized groups--indigenous people, parents in troubled homes, and others deemed financially incompetent--reflects the myth that poverty is cultural and not the result of oppressive structures.

A recent announcement on the introduction of Income Management in Anangu Pitjantjatjara Yankunytjatjara (APY) lands in southern Australia suggests that some communities are eager to comply: “APY Lands residents told us income management would help them better manage their money and help stop humbugging, ensuring there is enough money for life essentials, such as food, housing and clothing.”

To opponents of the program, the main problem facing poor people isn’t their bad self-management, but the faillure of the social service system to provide adequate economic supports for "life essentials." Adding to the attack on vulnerable families, Income Management has been rolled out with another strict "intervention": the threat of suspending certain welfare benefits for parents “whose children are not enrolled or regularly attending school,” thus further punishing poor parents and their children.

A coalition of community-based service providers and advocacy organizations has dismissed Income Management as both discriminatory and needlessly punitive. To progressive anti-poverty advocates, Income Management threatens to infantilize people who want self-sufficiency but are hindered by structural economic hardships. Pam Batkin, head of Woodville Community Services, tells Working In These Times via email that the program:

is a simplistic response to very, very complex social problems. People may be unemployed due to lack of education and skills or they may have a disability. Quarantining  their welfare payments if they are behind in their rent will not assist them to find a job. Indeed it may make life more difficult for people. Addictions to alcohol, illegal drugs or gambling are complex social issues which cannot be addressed by simply quarantining a person’s welfare payments.

In a statement of opposition issued last fall, Paddy Gibson of Sydney's Stop the Intervention Collective said the program was “built on racist assumptions that Aboriginal people are incapable of managing their lives; it imposes harsh control measures rather than creating opportunities."

A policy analysis by ACOSS points to “a lack of evidence that the groups targeted were unable to manage their financial affairs.” Even Parliament’s own assessment admits this in part.

Activists in indigenous communities have condemned recent welfare legislation as an affront to community sovereignty and economic rights. Following the passage of the so-called “Stronger Futures” bill in July, Dr. Djiniyini Gondarra, Yolngu Nations Assembly spokesperson, said in a statement, “By overruling the wishes of the people, the Government has declared a war on democracy.”

And now that the draconian model has been tested on indigenous people, the government is expanding it to new communities, though these “trials” will purportedly be made more palatable by encouraging voluntary, in addition to state-mandated, participation.

Randa Kattan of the Arab Council Australia, located in Bankstown, where the program has just been launched, likened Income Management to the harsh welfare reforms imposed in the United States during the 1990s, which were also designed to punitively push people off of benefits.

Australia, Kattan said, might “eventually... go down the road of the United States. The government wants to push people off the books, blame them for their situation, for things that are beyond their control." For service providers, Income Management would damage community relations. “This is a system that will change our relationship and how we work with people. This system is about punishment and control. It's very nasty."

Another issue with the government’s scorched-earth welfare reform is the potential for waste. ACOSS argued that while "the program increases the cost to Government of social security payments for those assisted by one third to one half," in the long-run, "the funds being invested in these programs could be more efficiently invested in initiatives to improve income support, employment assistance, housing, health, education and family services in poor communities."

The neoliberal arithmetic of Income Management can only be understood in terms of a one-percent political calculus. In both the United States and Australia, privilege is faithfully served at the expense of the poor. Leaders of prosperous Western democracies might be expected to invest public resources more wisely, but then again, they refuse to take orders from anyone on how to spend their money.