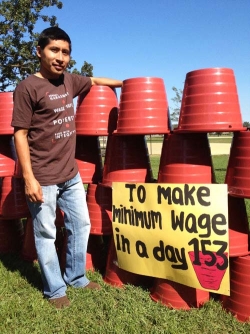 Leonel Perez, a CIW staff member and Florida farm worker, with the 153 buckets the CIW says a tomato picker must fill each day to make the minimum wage.   (Photo by Jeremy Gantz)

CHICAGO—Chipotle is a rare breed in the world of fast food: the chain not only markets its 1,000+ locations as healthy alternatives to old stand-bys like McDonald's and Taco Bell, but claims the food is better for the planet as well. Take a stroll through its website, and you might come away thinking one of Chipotle's boutique burritos--"food with integrity," the company's motto declares--can save the world.

To be sure, compared to most chain restaurants Chipotle's food is unusually--although by no means exclusively--organic, local and humanely raised. But for the Coalition of Immokalee Workers (CIW), Chiptole's motto is an insult to the farm workers who toil in Florida's prolific tomato country, where the most winter tomatoes in the United States grow. So some of them traveled to Chicago this month to set up outside of Chipotle's "Cultivate" festival and remind the company of its Campaign for Fair Food. The company has refused to be part of CIW's Fair Food Program, which raises pickers' pay and creates working standards through a contract between buyers, growers and workers.

A cross between Bonaroo and the urban farmer's markets sprouting up across the country, "Cultivate" took over a portion of Lincoln Park on September 15. Even as the striking Chicago Teachers Union held a massive rally a few miles to the southwest, the atmosphere was indeed festive as thousands wandered through a utopian smorgasbord of gourmet food, local farmers, celebrity chefs and free music in one of the city's most affluent neighborhoods. Those in search of food system enlightenment could earn a free burrito by visiting four of five "experience tents" to learn about avocados, sustainable apparel or pig farms, or watch Chipotle-produced films.

But I didn't see any farm workers until I left the festival. Up on a small ridge about 100 feet from a festival entrance stood CIW's makeshift wall of 153 tomato buckets. A Florida farm worker has to fill all of them in a typical 10-hour work day to make minimum wage; full, each weighs 32 pounds. Leonel Perez didn't mince words about what he thinks of Chipotle when I asked him why he was in Chicago.

"We want Chipotle to be the company they profess to be by having workers be part of the picture, and have workers be the ones that are fighting for their own rights," said Perez, a CIW staff member and farm worker, noting that the usual fast-food suspects—McDonald's Burger King, Taco Bell, Subway—have all signed agreements with CIW to pay Florida tomato pickers a penny-per-pound more. "What those companies have done, which Chipotle has refused to do, is to partner with farmworkers to respect their human rights."

This isn't a new conflict--it's been visible since 2009, when a group of food writers and activists signed a letter to founder and CEO Steve Ells chiding Chipotle for refusing to work with CIW. (Ironically, signatories included Food Inc. director Robert Kenner, whose film Chipotle had promoted.) And since then, Chipotle's stance toward CIW has been pretty much the same: We agree with you in principle, are doing what you want in practice, but don't want to lose flexibility in how we operate.

"There were pieces of the contract that we found troubling," said Chris Arnold, Chipotle's director of communications, as the Cultivate crowd swayed to a rock band a few dozen feet away. "Under the [Fair Food] Agreement, it essentially took a lot of control away from us, in terms of our ability to go outstide of the system if we had to for quality reasons. ... We aren't particularly keen on relinquishing control over our supply system."

The company last looked at the agreement three years ago, he said. Because Chipotle has only bought Florida tomatoes during the last three years from growers who have signed the Fair Food Agreement, Arnold says, it isn't important whether the company signs at this point because the same results are achieved: "The workers benefit from better wages and working conditions."

What is the Fair Food Agreement, and why does it matter so much to farm workers in Florida?

In brief: It guarantees a wage increase and embeds human-rights standards in the state's tomato industry. Big purchasers (major fast-food chains, but also Whole Foods, Trader Joe's and food service giants like Sodexo) agree to only buy tomatoes from growers who abide by the "Fair Food Code of Conduct," and to pay a price premium that goes to the more than 80,000 workers who harvest over the course of a season. Among other things, the Code of Conduct bans forced labor and child labor. (In recent years, CIW has drawn attention to modern-day slavery in the industry.) Enforced by third-party auditors, the code also gives workers a voice, allowing CIW to conduct worker education meetings so pickers know their rights.

About 90 percent of Florida's tomato fields are governed by the agreement since the Florida Tomato Growers Exchange, the industry association, signed a deal with CIW in 2010. It's still being implemented, but CIW says significant changes have already "taken root" on Florida farms. CIW, founded in 1993, is now mainly targeting supermarket chains like Publix, which comprise the last bloc of major buyers who haven't joined the Fair Food Agreement. More than $4 million in buyer premiums have been paid since the start of 2011, reaching workers via growers as a bonus on paychecks.

Chipotle says it's supporting all the benefits of the agreement without being part of it because it only buys from participating Florida growers. "We provide records of our Florida tomato purchases to CIW's auditors so they can see how much we're buying, from whom, and what we're paying," Arnold says.

CIW acknowledges that Chipotle submits monthly reports to the Fair Food Standards Council (FFSC), the third-party organization that monitors and enforces human-rights standards established through the CIW's Fair Food Code of Conduct. But it strongly disputes the idea that this holds the company to the same standards as participating companies.

"Chipotle, by its own design, has no direct contact with the FFSC, so you can forget about FFSC auditors showing up at the burrito giant's Denver headquarters for an audit of tomato purchasers anytime soon," a CIW press release says. "Without a commitment to transparency, there can be no verification or legitimate claims of compliance."

Voluntary submissions of purchases also means that even if a grower is found in violation of the Code of Conduct, Chipotle could keep buying from it. Signatories are obligated to source tomatoes from a compliant grower. "Chipotle has refused to commit to stop buying from farms where a known violation occurs, as other corporations have done," Perez says.

Auditors may not be visiting Chipotle's headquarters soon, but CIW will soon be four miles from it. Perez and other activists are planning on traveling to the next edition of the "Cultivate" festival, in Denver's City Park on Saturday, October 6, where they'll once again protest Chipotle's vision of "food with integrity."

"They refuse to see workers themselves as vital and equal partners to change conditions in the fields," Perez said late Saturday afternoon in a speech. "And that is something we are not going to accept. That is why we have come here today, and that's why we're headed to their hometown of Denver. We will not stop until Chipotle recognizes our humanity."