Lessons From Essen: What the U.S. Rust Belt Can Learn From Germany 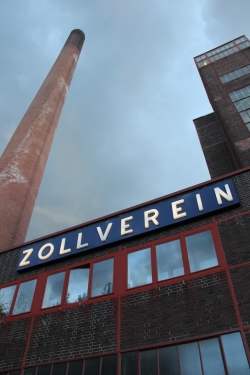 Zollverein, once a major mining and coking plant, is now a sprawling and surreal museum that explores Germany's industrial history.   (Kari Lydersen)

ESSEN, GERMANY—Stephan Haas has probably given this spiel hundreds of times, but he still sparkles with enthusiasm and mischievous wit as he tells the tale of the notorious Krupp family, the German magnates who helped make this area the heart of German industry. Speaking English for the benefit of French and Finnish visitors, Haas describes how Friedrich Krupp caused a scandal by reportedly seducing boys in Italy and how his wife Margaret was committed to a “madhouse” when her complaints about her husband became inconvenient. He shows visitors around the imposing Krupp mansion, slyly critiquing the architecture, and explains the company town known as Margarethenhöhe, which houses Krupp managerial workers.

Krupp’s company, now the multinational ThyssenKrupp, is still based in Essen in the Ruhr region in northwestern Germany, where the smokestacks of steel mills, coal-fired power plants and factories still rise above the otherwise lush green fields and hills. But over the past decades, much of the steel and coal industries once located here have closed up, along with the underground coal mines that in the 1950s employed 470,000 and now employ only about 30,000. Of more than 200 underground mines that once supplied 125 million tons of coal a year, only a handful remain open and they are all scheduled for closure by 2018. Because of the offshoring of industry and the import of cheaper coal from Colombia, Poland and South Africa, the Ruhr region now has among the country’s highest levels of unemployment and economic distress. (Though it is still noticeably more prosperous than much of western Europe and the United States; Germany has weathered the economic crisis better than most.)

“It used to be that miners were the underground kings, everyone respected them, this whole region was built by coal,” says Haas. “But now if you say you are a miner, you wouldn’t get the same response you used to. The memory is fading, and the miners are disappearing like dinosaurs.”

(A significant mining industry still remains southwest of the Ruhr region around the town of Duren, near Cologne, but that is the strip-mining of soft, dirty “brown coal” burned in nearby power plants run by the company RWE. Activists and local legislators who oppose the industry note that it employs relatively few people, because the massive strip mines are largely automated, and causes huge amounts of pollution that endanger public health and contribute to climate change.)

Like some former industrial and mining areas in the United States, civic leaders in the Ruhr region have tried to rebrand the area as a mecca for arts, culture and tourism, celebrating the rich industrial history (and now-lower levels of pollution). Their plan got a major boost in 2010 when the European Commission named the area a “European Capital of Culture,” a designation created in 1985 as a means to promote European cohesiveness and boost an area’s tourism and economic vitality. Since then, millions of visitors from the rest of Germany, Europe and beyond have toured new modern art museums and historical sites in towns and cities like Essen, Mulheim, Dortmund and Duisburg. The idea was that the region’s new identity could create tourism-related and other service-economy jobs and attract new high tech and other businesses to locate while maintaining a role for the heavy industry that does still exist. The region has also gained tens of thousands of jobs related to renewable energy, according to regional Green Party elected officials, since solar power installation and manufacturing (and to a lesser degree wind power) has boomed in Germany in the past few years. It helps that the Ruhr region, in part because of its industrial heritage, is home to 20 universities, including top technical institutes.

A massive former mine and coking plant called Zollverein is a prime example of the region’s transformation. Zollverein once consisted of almost 100 miles of underground tunnels and railroads that descended almost a mile deep, where tens of thousands of miners working in often horrifying conditions extracted many millions of tons of coal from the mid-1800s to the mid-1900s. Much of the mine infrastructure and the central coking plant sprawling across the surface of the mine have been preserved. They now appear sculptural and surreal: soaring towers capped with wheels that pulled coal out of the earth; maze-like networks of conveyor belts and rail tracks; shining boilers, cylinders and cooling towers that are beautiful in abstract and geometric ways; even a carnivalesque contraption reminiscent of a Ferris wheel rising above the coking ovens, which were closed in 1993.

The Ruhr Museum, depicting the region’s history from prehistoric times to the present, is housed in the old coal wash house, and events from alternative energy conferences to weddings are held in countless converted conference rooms and reception halls onsite. Another former mining structure houses the highly regarded Red Dot Design Museum, while old coal buildings are also home to smaller art galleries and studios and a revolving schedule of concerts and performances.

Also tapping the Ruhr’s regional heritage is the Bergbau Mining Museum in nearby Bochum, which was founded in 1930 and got a major boost thanks to the Capital of Culture.  More than a million people annually peruse a vast and eclectic mix of mining paraphernalia, artifacts and art. The collection, hard to see in a single day, includes hundreds of different miners’ lanterns from over the decades, a plethora of quirky dioramas and several rooms packed with mineral samples from around the world.

The high quality, efficiently run museums and tourism services in the Ruhr region provide an inspiration for U.S. Rust Belt towns trying to stimulate tourism and culture to replace the mining and manufacturing jobs that have disappeared. But the Ruhr region also shows that even a thriving tourism and culture industry provides a relatively small amount of direct employment, with the jobs directly created across a whole region unlikely to ever match the jobs lost at even one mass employer like acoal mine or steel mill. Jobs may be created in restaurants, shops and the like, but most tourists still move through the region in a matter of several days, so the economic ripple effects of popular museums and cultural institutions do not appear to be wide. Various people working in the area said that the European Capital of Culture designation brought a wave of attention and economic stimulus, but didn’t create significant lasting changes in the area’s identity or economics.

And this is all in a place like western Germany where tourists from other relatively well-off countries can regularly and easily travel. Luring visitors to a remote former mining village in Colorado or a notorious post-industrial city like Gary, Indiana, is an entirely different story.

A more realistic replacement for the lost jobs might revolve around clean energy. The German Green Party claims that in little more than a decade renewable energy has created 380,000 jobs, thanks to government policies like the feed-in tariff that promotes it. A significant portion of these jobs are located in the Ruhr region. For former U.S. industrial areas that still have infrastructure and skilled workers, such green jobs could be a better bet than tourism and culture in terms of employment, although, as in the Ruhr region, the two approaches can complement each other.

But the well-being of a region or a city has to do with more than its employment statistics and economic indicators. Pride in place and history and the cultural, artistic and social resources that are available to local residents and draw visitors surely have benefits beyond the economic bottom-line. The Southeast Environmental Task Force in Chicago had tried to turn a former coking plant on the city’s far south side into a museum before the structure was ultimately demolished. The group had failed to get the adequate funds or political and institutional support for their project. Wandering the grounds of Zollverein, I couldn’t help but think of the shame that a similar (if smaller scale) opportunity in an economically struggling community in Chicago was squandered. But countless opportunities still exist; hopefully U.S. leaders and regular residents can take inspiration from places like Zollverein to create monuments that provide some economic stimulation and pay tribute to U.S. workers and industries of years past.

Kari Lydersen is spending two weeks in Germany and the United Kingdom thanks to a Climate Media Fellowship from the Heinrich Böll Foundation North America. She'll be reporting on renewable energy, past and current coal mining regions, and the role of coal and renewables in these countries’ energy futures.