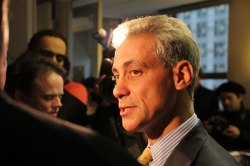 At an October 22 forum sponsored by Columbia College, three prominent Chicago political analysts gave Mayor Rahm Emanuel grades ranging from "C" to "D-" to "incomplete." Emanuel lost points because of his battle with the Chicago Teachers Union and his looming confrontations in negotiations with the transit workers, firefighters and police unions.

Larry Bennett, a political science professor at DePaul who gave Emanuel an "incomplete" since the mayor is mid-term, offered three hypotheses as to why the mayor took “such an aggressive approach” with the teachers:

Did Mayor Emanuel really think the Chicago Teachers Union was the devil and in order to improve public education in Chicago you have to break the teachers union?

[Or] was Mayor Emanuel’s approach in some sense political—[as though] taking a hard line with the teachers union was going to endear him with certain constituencies which would be of use to him?

Or was it possibly produced by a character flaw—a reflexive tendency to bully people who you ought to engage in a cooperative effort?

Joravsky, too, raised the possibility that Emanuel’s stubbornness and impulsivity played a role in the showdown with the Chicago Teachers Union. He noted that tensions first rose when Emanuel insisted on demanding a longer school day—despite the fact that there was not money to pay teachers for their extra work and neither teachers nor parents cited school day length as a major problem.

“A prudent wise view of public schools would somehow distinguish between all the contrasting needs and try to apportion what little money we have,” Joravsky said. “That would require working with your public, unions, principals, etc. Instead Mayor Rahm continued to campaign—he had campaigned on extending the day, he was going to extend the day no matter who got in his way—and we had debacle led to the teachers strike.”

Joravsky gave Emanuel an “incomplete” for his performance as mayor but a "D-" in terms of his larger political career, blaming Emanuel not only for an anti-union ideology but also for grossly underestimating the power and popularity of the teachers union. He thinks this crucial mistake—on its face surprising from such an ambitious and intelligent politician—came because Emanuel “wasn’t born in Chicago, he hardly ever lived in Chicago, as far as I could tell he never thought much about Chicago, he’s learning what Chicago is as he goes along.”

“He came to the conclusion that the Chicago teachers union was not important to him—that like unions in general they were losing power, losing membership, very unpopular among the rank and file, and he could probably advance his career by getting in a fight with them.”

Dominic Pacyga, a history professor at Columbia College, gave Emanuel a "C" largely because of his embattled relationship with labor, including the police and firefighters unions. He said that given the city’s soaring murder rate, which has gained international attention in the past year, the city should be hiring 2,000 additional officers rather than trimming police budgets.

Pacyga also thinks Emanuel’s administration should do more to bring in blue-collar jobs and build on Chicago’s existing manufacturing base, especially by utilizing land on the city’s vast Southeast side.

“There are a lot of people here who need work, people who don’t want to go to college, who don’t want to be part of the digital revolution; they want good paying jobs so they can pay a mortgage,” he said. “Chicago is still one of the best manufacturing centers of the United States, we do produce a lot of things here and we can continue that if City Hall has a logical realistic plan.”

When an attendee who had worked on Emanuel’s campaign requested that the panelists discuss the mayor’s successes, there was an awkward silence. Joravsky offered the only concrete response, praising Emanuel's recent decriminalization of marijuana. Bennett described Emanuel as “a lifestyle liberal [who] appeals to bike riders such as myself ... he’s developing a cultural plan, he will be attentive to gays and lesbians…there’s a way he carves out a liberal niche for himself even as he pushes forward a city government that is fundamentally business-oriented."

The panelists discussed the Mayor’s penchant for privatization, and noted that in certain contexts it might be a smart move that can improve services and create jobs, such as in the privatization of garbage pickup. But Bennett warned against applying privatization as a catch-all to more complicated sectors like education:

To me the issue with the business approach to city government is that while there’s no such thing as a public versus private sector way to collect garbage, things like running public schools are more complicated. In the United States the greatest social problem we confront is increasing economic and social inequality. One way I expect that to be further exacerbated is the collapse of the public education system where all kinds of consumers with all kinds of resources and ability to choose schools are set loose to choose schools and those people with what we social scientists so nicely call social capital and also real capital will get good educations and the others won’t…Too simply say we have to fix schools by privatizing them doesn’t even begin to address those problems.