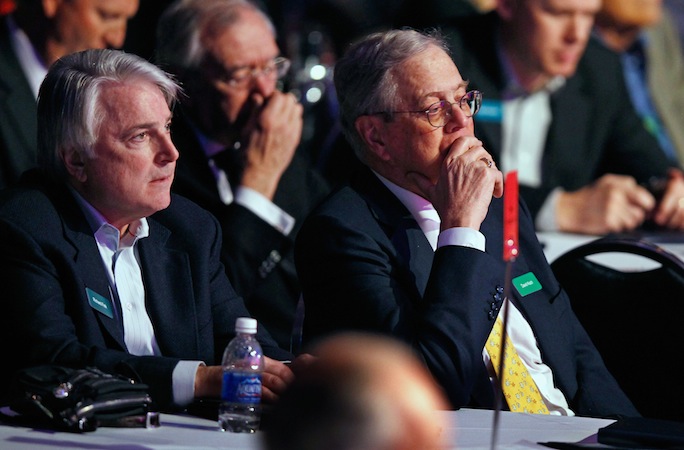 David H. Koch (R) and Richard Fink (L) are both executives at Koch Industries, which is telling Duluth Georgia Pacific employees to support the very politicians who are taking away their jobs.   (Chip Somodevilla / Getty)

At the beginning of October, Glenn Jackson got an unusual packet in the mail from Georgia Pacific, the company that had employed him in its thin wood-manufacturing plant in Duluth, Minn., for 21 years. In a letter attached to a list of Republican candidates, Jackson was informed by David Robertson, president and CEO of Koch Industries, which owns Georgia Pacific, that:

If we elect candidates who want to spend hundreds of billions in borrowed money on costly new subsidies for a few favored cronies, put unprecedented regulatory burdens on businesses, prevent or delay important new construction projects, and excessively hinder free trade, then many of our more than 50,000 U.S. employees and contractors may suffer the consequences, including higher gasoline prices, runaway inflation, and other ills.

The letter was bitterly ironic for Jackson because the greatest economic ill he faces today comes courtesy of Koch Industries. At the end of August, Georgia Pacific announced it would close his plant and lay off 140 workers, including Jackson. The letter from his former employers added insult to injury.

“It reminded me of a bully of the playground: you vote our way or you go,” says Jackson.

Even more upsetting to Jackson, however, was that the packet encouraged him to vote for Rep. Chip Cravaack (R-Minn.) Jackson’s union, United Steelworkers Local 776, had reached out to Cravaack on several occasions, asking for his help in setting up a meeting with Georgia Pacific about why it was shutting down the plant. The union claims that the plant is profitable and don't understand why the company is shutting it down.

“We have no idea why the plant is closing,” says Jackson. “Nobody will gives us a straight answer. I think its politics. I think they want to get rid of the union.”

In an email statement to Working In These Times, Georgia Pacific spokesperson George Guest said, “the facility was unprofitable for several years," and "while we hoped we could make the economics work–ultimately we needed to make the difficult decision to close our operations for the betterment of our other facilities and workforce across the country.”

“They told us in most recent months that they were making a profit,” says United Steelworkers Staff Representative Gerry Parzino.  “And they told the mayor six to eight weeks before they closed the door that they had capital investments and they were going to keep the place. Then they just blindsided us with this closure.”

Parzino believes the plant is profitable and he speculates that Georgia Pacific may want to sell the plant because it sits on a prime location. “It’s just a bizarre thing,” says Parzino. “The only thing I can think is that the real estate is very valuable since it’s on the shore [of Lake Superior]. It’s got its own pier. It’s basically an international seaport.”

More troublesome to the union is Georgia Pacific's refusal to sit down and meet with investors who are interested in buying the plant. So far the company has refused to sell the plant out of fear that it might bring a competitor into the market.

“The plan calls for some of the production from Duluth to be transferred to other GP wood products facilities,” Guest said in his statement.  “Any usable equipment will be moved and we will begin the process to sell the remaining assets--including the plant building and the property. Georgia-Pacific continues to work with local officials to identify parties interested in the purchase of our building and property in Duluth. As a private company, we have never speculated about potential transactions. As such, we will not talk about any element of the process until we have reached an agreement with an interested party."

The union and Duluth Mayor Don Ness, a Democrat, have repeatedly called on the Rep. Cravaack to pressure Georgia Pacific to sell the plant intact to interested investors. Mayor Ness co-signed an October 8 letter to Rep. Cravaack, in which Parzino and Duluth Director of Business Development Chris Eng wrote,

In the letter as well as other phone communications with Cravaack’s office, they urged Cravaack to contact them as quickly as possible so as to prevent the plant from being closed. When Cravaack finally responded to their letter, three weeks later, Parzino says his response was “weak."

I have received response from Georgia Pacific (GP) in response to your inquiries of whether they intend to sell the facility and if they would work with the city in finding and communicating with potential investors. Georgia Pacific has told my office that they are moving forward with a plan to sell the facility (building and property, as well as any assets that could not be used in other GP facilities). They did provide the caveat that they are not willing to sell it in operating condition to a competitor.

“Georgia Pacific has expressed willingness to work with both state and local officials with respect to inquiries about the property,” Cravaack added. “Please do not hesitate to contact me or my Chief of Staff, Paul Blocher, if we can be of any assistance in this matter."

The union says that it would prefer for Cravaack to pressure Koch Industries publicly to sell the Georgia Pacific plant to a competitor so that it can stay open, but so far Cravaack has not said anything publicly. Parzino speculates that Cravaack is unlikely to say anything since he has received big-time backing from Koch-financed groups in his tight re-election campaign against former Democratic Rep. Rick Nolan. (Polls have shown the race to be within the margin of error.) Outside groups have spent more than more than $6.2 million in the race. The Koch-backed group Americans for Prosperity has already spent more than $1 million in ad buys in the state of Minnesota and the group has been recruiting phone bankers in Minnesota. (It’s impossible to tell how much money has been spent overall since much of it won’t be disclosed until after the election is over.)

“He sure isn’t going to put on pressure on them,” says Parzino. "He sure isn't going to burn that bridge that butters his bread."

Rep. Cravaack's office did not respond to a request for comment, but his campaign has said that the issue of the plant closing is being unfairly used in order to score political points against them. In an October 21 press release titled, “Nolan Plays Politics with Plant Closing,” on the Cravaack for Congress website, the campaign states, "This afternoon, the flailing Nolan for Congress campaign held another press conference to continue to try to score political points at the expense of Georgia Pacific workers who lost their jobs over the recent plant closing."