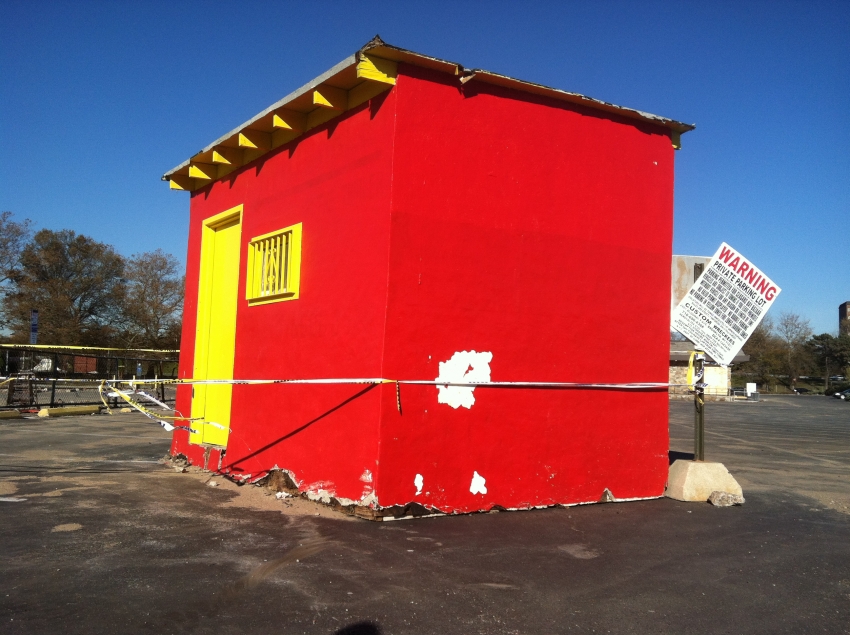 Thanks to Hurricane Sandy, the Bay Parkway Community Job Center, which provides stability to day laborers, is now hundreds of feet from its original location.   (J.A. Myerson)

A storm surge from Hurricane Sandy unmoored the Bay Parkway Community Job Center, New York City’s only center for day laborers, and moved it a couple hundred feet inland from the Bensonhurst shore, cracking one of its walls in the process. Ligia Guallpa of the Worker Justice Projects, which operates the center, and Lionel, one of the center’s founders, tried to show it to me Tuesday afternoon, but the New York Police Department objected.
“I’m trying to be nice, okay? You have to go,” Office Dym instructed us. “We’re here for a reason,” he said, getting out of his vehicle to push me away. “It’s not safe.”
“See?” Guallpa lamented. “This is what they do to us every morning when we have workers.” The police have blocked off the “hazard area” around the center, though just why was not remotely apparent, when we subsequently snuck in the back way. Despite repeated inquiries form Guallpa and the Worker Justice Center, the authorities have refused to estimate when the “hazard area” designation will be lifted. According to Guallpa, “They say it’s ‘not a priority.’”

Founded in 1999 and built by the hands of the day laborers who use it, the center acts a little bit like a trade union. Contractors looking to hire day laborers sign a contract with the center stipulating that their employees will work an eight-hour day, receive $120 per day in compensation and be provided lunch. Since the NYPD’s decision to deny entry to the area, workers have been forced to go back to street corners, where they are sometimes given up to 12 hours of work for as little as $90 and forced to buy their own lunches. Wage theft is also a common practice with the workers when they are not being hired under the stewardship of the center, which additionally provides safety and legal trainings.

“The center is a symbol of hope and inspiration, that you can always have help for your family and community,” Lionel says, relying on Guallpa for occasional translation. Lionel emigrated from his native El Salvador some 20 years ago, moving around the country until the late 1990s, when he wound up in Coney Island, where he still lives. “If it’s gone,” he said, “history is erased.”

The city’s claim that the “hazard area” is “not a priority” is difficult to stomach; it’s enough of a priority that police officers are assigned to ensure (ineffectively, it turns out) that no one gets into the area. Tellingly, it is merely guarding the entrance, rather than clearing up the “hazard” with which police officers have been tasked.

For the 40-or-so laborers who rely on the center for work every day, there is no higher priority. “The idea was to find a dignified alternative to the harassment of the street corner,” Lionel said. “As soon as my friend Jose came to the center, he found a good employer that was able to hire him full-time. Because of that job, he has been able to send all of his kids to college.”

Especially now, amidst the devastation left in the storm’s wake, the workers’ skills and, by extension, the Bay Parkway Community Job Center are crucial. Guallpa tells me that some of the workers formed a volunteer brigade to contribute to the Hurricane Sandy relief effort. The people coordinating volunteers “thought they had come for food,” she recounted. “Really, they had come to help out.”

J.A. Myerson is an independent journalist who blogs at jamyerson.com and who currently works with the Media and Labor Outreach Committees at Occupy Wall Street.