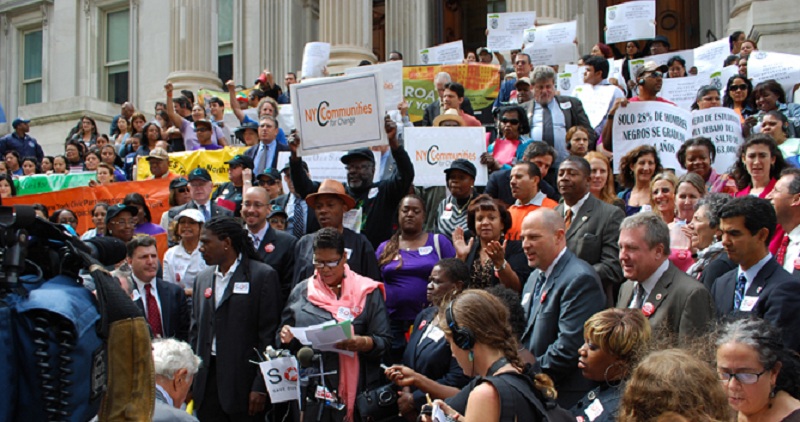 Every year, New York City middle-schoolers subject themselves to a grueling academic ritual that could make or break their educational futures, or so they’re told. The 2.5-hour multiple-choice Specialized High School Admissions Test (SHSAT) serves as the sole gateway to a suite of elite public schools—particularly Bronx Science, Stuyvesant and Brooklyn Technical. The kids who make the cut tend to be disproportionately Asian and white; Latino and black students are vastly underrepresented.

Civil rights groups are now waging a legal challenge accusing New York City’s education authorities of tying the elite tier of schools to an arbitrary test that effectively perpetuates inequality. The complaint was filed by the NAACP Legal Defense Fund, LatinoJustice PRLDEF and the Center for Law and Social Justice at Medgar Evers College on behalf of a coalition of civil rights and community groups.

The backdrop to the legal controversy is a growing rebellion against high-stakes standardized tests, which some say perpetuate racial and socioeconomic equity in urban schools. The SHSAT is separate from the state's standardized test system (which is designed to comply with federal education reforms), but, as a gatekeeper to educational opportunity, raises similar concerns.

The test, which civil rights advocates point out lacks a solid empirical basis, tracks underlying, deeply intertwined educational barriers of class and race. Kids living in poverty tend not to have the same access to either the private test preparation courses or the school environments that train students to score well on the math and verbal sections of the SHSAT.

The racial divide in test results is stark. According to the federal civil rights complaint, only about 5 percent of black test takers and 7 percent of Latino test takers are offered admission to any of the specialized schools based on their SHSAT scores, compared to about one third of both their white and Asian counterparts. Some Asian-American community activists argue that low-income subgroups, including Bangladeshi, Pakistani and Nepali students, are also disadvantaged.

Teachers who oppose harsh testing regimes say the specialized high-school admissions process shares the same problematic approach as the statewide standardized tests that are imposed on the entire school system. Peter Lamphere, a math teacher at a Queens high school who used to teach at Bronx Science (which this reporter also attended), tells Working In These Times via email, “The inequity in access to the specialized high schools is one of the many glaring examples of racial injustice in our school system. ... Access to adequate middle school instruction to prepare students for the exams is profoundly unbalanced.... it is also clear that the exams themselves measure student aptitude in a biased way.” Lamphere is a member of the Movement of Rank and File Educators (MORE) caucus of the United Federation of Teachers, which raised a motion at a recent union meeting in support of the legal action.

Wazina Zondon, a counselor and sexuality and health education teacher at a Brooklyn all-girls’ school, says that in the race for elite school admissions, the types of youth she works with are disadvantaged from the outset, in large part because many don’t benefit from the test preparation services that more privileged middle-schoolers enjoy. Zondon, a member of the grassroots network New York Collective of Radical Educators, tells Working via email, “Unfortunately, I see my students give up before they even begin the high school process. My students are 100 percent young women of color (black, South Asian, Arab, Latina and mixed backgrounds) and they see/feel the disparities highlighted when they do not 'pass' this exam.”

Although the specialized high school exam is optional for students, it fuels an overarching testing obsession long criticized as antithetical to critical thinking. Much of the anti-testing sentiment in New York centers on statewide standardized tests that are key criteria not only for determining students’ advancement, but also for judging teachers’ job performance, threatening to reduce the complex dynamics of pedagogy into training kids to fill in the correct bubbles.

Opponents of high-stakes testing systems say city education authorities have tried to effectively punish poorly rated schools by stigmatizing them as “low performing” or “failing” and threatening some with closure.  The advocacy group Change the Stakes argues that the testing craze dumbs down the curriculum, encourages cheating, and undermines and disrupts the teaching staff. Students with learning disabilities, limited English skills and other challenges, along with schools in underserved communities of color, suffer especially, according to Diana Zavala, a parent activist with the group: "It is these kids who need to have the richer curriculum and have experiences that they don't normally have at home, but because the testing is so critical, it is these students who are then forced to hours of test prep and limited amount of subjects."

The pressure to rank kids can taint their attitudes toward the school community. MORE member Rosie Frascella, who teaches at the immigrant-focused International High School in Brooklyn, tells Working that while her school's policy is generally to keep students in integrated settings, rather than separate tracks, “there is a pressure to divide students based on whether we think they can pass the Regents [statewide academic] exam.” The fixation on scores and graduation rates “kills the classroom environment because then you're tracking students at such a young age. And it also is like a mindset: if you've been told you're not performing at a certain level and you're underperforming, that becomes your persona. You're going to always feel like... ‘Well, I'm just not good at school.’”

Many teachers bristle at the idea of job security being tied to students' scores, pointing out that test-based evaluation criteria for teachers ignores many other factors that affect student performance. A MORE teacher at a high-performing Queens middle school tells Working that even though his students are considered more academically driven, the pressure to base curricula around state exams reflects an attempt at "scientific management of the teaching process,” which evaluates an “extremely complex and subtle layer process... in this very flat way that doesn't actually factor in all the things that make up a child's academic achievement, which are outside the classroom and are completely outside of the control of the teacher."

For countless New York City students, life is full of real tests—the trials of survival in the face of deprivation and segregation. Their teachers might appreciate those overlooked everyday achievements, but so far, the city's testing schemes fail to provide an answer key for the real-life challenges facing these youth, while continuing to cheat them out of a quality education.