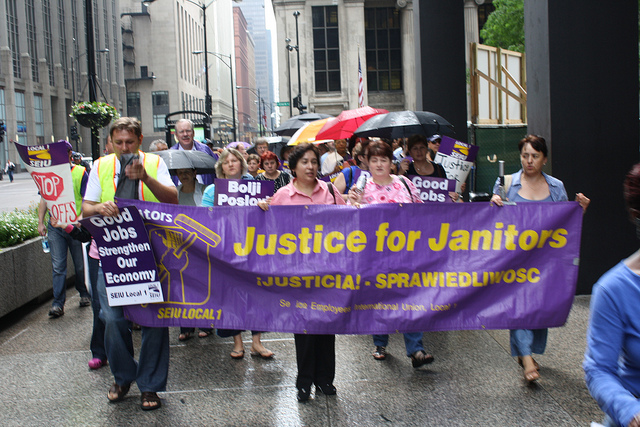 SEIU Local 1 has fought for Chicago janitors before, but may lose their recognition at the O'Hare airport because of a new non-union city subcontractor. (SEIU Local 1 via Flickr Creative Commons)

Outside the Westin River North hotel in downtown Chicago on Nov. 5, about 20 men and women in winter clothes stood quietly facing the entrance, handing out fliers. They read, “Mayor Rahm Emanuel, Stop Eliminating GOOD JOBS” and implored people to call the mayor and “tell him to keep our airport CLEAN & SAFE, and our families STRONG.”

Inside the hotel, Emanuel was presiding over the fifth annual Airports Going Green conference, where airport and airline executives from around the world were discussing the latest in sustainable airport management, including aviation biofuel development, electric vehicles, recycled asphalt, community volunteer days and LED flight information screens. Emanuel told the crowd that investment in energy efficiency and sustainability at airports like Chicago’s O’Hare and Midway makes sense because it “creates jobs.”

But the flierers outside the hotel represented more than 300 janitors who fear they will lose their jobs at O’Hare International Airport. The previous week, the city signed a contract with a new subcontractor to replace Scrub, which currently employs the airport janitors. United Maintenance Company, which won the contract, reportedly submitted a bid to the city’s aviation department promising to do the work for $11 million less than Scrub, a difference of about 10 percent. United Maintenance is not required to hire the people who worked for Scrub, and if they do it will likely be at lower wages, weaker benefits and without union representation.

Tom Balanoff, president of SEIU Local 1 (which represents all 330 of the janitors at O'Hare), believes the new contractor will try to thwart any efforts by the janitors to unionize. He tells Working In These Times that United Maintenance head Roger Simon specifically told him they would not recognize SEIU Local 1 and that Simon indicated starting wages will be $12 an hour, considerably lower than the $15 an hour many are making with Scrub.

SEIU Local 1 finds the cost-cutting in the janitorial contracts especially frustrating because the city does not save any money. The janitorial funds don’t come out of the general city budget, but rather are covered through fees paid by airlines. Moreover, the city rejected bids by several union contractors who like Scrub also recognize SEIU Local 1 and would pay union wages. (They are covered by the union's master contract.)

“This is simply a way to bust the union,” Balanoff said. “And it’s the wrong direction to be going in.”

SEIU Local 1 represents janitors, window washers, security guards and others who work for private contractors in city buildings. While the airport janitorial jobs have been privatized for a number of years, Balanoff would like to see them made public again—with workers directly hired by the city—even though that would mean Local 1 losing members to SEIU Local 73, which represents city employees.

The janitors outside weren’t the only labor representatives at the Airports Going Green conference. Later that afternoon, panelists discussed greening airport concessions, such as restaurants and snack shops. Steve Dietz, business manager of Food Donation Connection, spoke about his company's work facilitating donations of unsold food to hunger relief agencies. Dietz noted that concessions workers are big boosters of the program and take home unsold food themselves.

During the Q&A, Don Lydon, an analyst for UNITE HERE Local 1 stood and said, ”Workers will be at the forefront of implementing these sustainable business practices … so do you think we need to make these sustainable jobs with living wages, so they’re not relying on food donations?”

Dietz seemed caught off guard and answered, “We don’t control what people pay … we only have 40 people in our company … I would agree with that … but unfortunately I don’t know … Who controls all that?”

It’s true Dietz and his organization have no power over what huge companies running airport concessions pay their workers; however, the city aviation department and the city council do, through the contracts with concessionaires.

UNITE HERE Local 1 represents about 1,300 concessions workers at O’Hare and Midway. The union has long been pushing the city council to close a loophole exempting airport concessions from the city’s living wage policy, which mandates private contractors working for the city pay their workers the city living wage of $11.53 an hour. (Meanwhile, critics including Balanoff argue that $11.53 isn’t truly a living wage in Chicago.)

Just two weeks before the conference, about 1,200 workers at O'Hare concessionaire HMS Host signed a union contract with the company that would increase their wages and benefits significantly, to above the living wage. But at the same time they celebrated this victory, they worried they would lose their jobs—or at least their newfound raises—in coming months. HMS Host’s contract with the city expired over the summer, and city officials have said they will be accepting new bids over the winter. Like the janitors, the concessions workers could lose their jobs or be rehired at lower wages if the city chooses a non-union contractor.

In theory, either the city council or the aviation department—which decides which bids to recommend to the council—could require that bidders have fair labor practices. UNITE HERE has for some time been pushing the city council to adopt an ordinance called Stable Jobs, Stable Airports, which would mandate any new company rehire existing workers for at least a 90 day trial period and ensure “labor peace,” giving workers a fair chance to organize with a union. In October, hundreds of Chicagoans including prominent pastors and aldermen had joined airport concessions workers at the Chicago Temple downtown, calling for the ordinance’s passage and the renewal of HMS Host’s contract.

“It’s the airport workers who make the sustainable food,” UNITE HERE organizer Chris Williams tells Working In These Times. Williams works for a sushi shop at O’Hare airport, and he said employees like himself take pride in making quality, healthy food and participating in recycling and other sustainability programs. “Like Rahm Emanuel said here, going green and creating jobs goes hand-in-hand. These things are not diametrically opposed. The employees are pushing for the same things as the city, they should recognize that.”