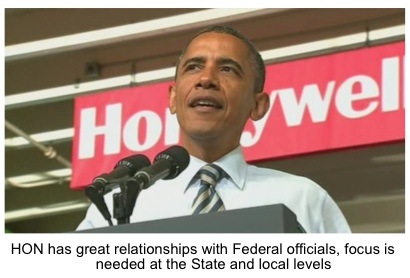 An image of Obama from the leaked Honeywell document is captioned "HON has great relationships with Federal officials."

In These Times has exclusively obtained a leaked internal Honeywell document outlining an anti-union strategy that includes leveraging Obama administration connections. The documents suggest that the megacorporation is deeply concerned about recent union activity at its factories and the bad press that has resulted (one example cited is a Working In These Times op-ed).

The PowerPoint presentation, downloadable here, was leaked to In These Times by unionized Honeywell workers who downloaded them from company’s internal database. Titled “DRAFT Honeywell Readiness Plan for Corporate Union Campaigns” and marked "Honeywell - Confidential," the slideshow was authored by four Honeywell interns (see correction at bottom). Though the document is undated, it appears to be relatively recent, relying on 2011 data. Its stated objective is “to develop a framework that can be used by Honeywell with the resources required to prevent or react to a nationwide corporate union campaign and dissipate any problems as quickly as possible.”

“Honeywell is at significant risk of becoming the target of a national union corporate campaign and has no readiness plan in place to deal with this possibility," warns the document. A graphic identifies a number of unions and workers' organizations as potential sources of such a campaign, including SEIU, Warehouse Workers United, the AFL-CIO's Change to Win, UNITE HERE! and the United Steelworkers. Honeywell notes in particular the dangers of negative publicity, citing as one example an August 4, 2011 Working In These Times op-ed by Metropolis Honeywell employee and USW Local 7-699 leader John Paul Smith titled “What the Honeywell Lockout Taught Me About International Labor Solidarity.”

The third section, on Government Relations (GR), reveals Honeywell's hopes that its influence with the Obama administration can be leveraged to help combat union activity. Slide 18 of the confidential document states that Honeywell (HON) should “continue to grow positive relationships with elected officials, with federal agencies, focusing on local branches." These relationships, the document explains, "can be directed at union activity, if needed.” The plan suggests that Honeywell's Government Relations division can be used to “break up union cohesion across the country.” A picture of President Obama speaking at a Honeywell plant is included (see above), with a caption reading “HON has great relationships with Federal officials, focus is needed at the State and local levels."

Indeed, President Obama and Honeywell CEO Dave E. Cote have a very close relationship. Cote visited with Obama at the White House this past Wednesday to push him to cut budget spending. Cote is considered one of Obama’s closest allies in the business community. In January of 2009, Cote introduced Obama’s stimulus package in a White House speech. Cote was subsequently appointed by Obama to serve on the Deficit Commission. President Obama even flew with Cote to India while a lockout at Honeywell's Metropolis, Ill. uranium plant was ongoing. Cote returned the favor by giving heavily to the Democratic Party. In the 2010 election cycle when the Met, Honeywell was the top corporate PAC contributor to the Democratic Party.

Union activists believe that Honeywell’s federal ties have already enabled the company to call in government help when suppressing unions. In 2009, Honeywell threatened to use Marines to replace 500 United Steelworkers members in Blount Island, Fla. if the military contractors went out on strike. Honeywell had the military security clearances pulled on several of the union leaders, leading them to lose their jobs. In 2010, I exposed evidence that Honeywell cheated on qualification tests for scab replacement workers during the lockout at its Metropolis uranium facility; during the lag between my report and the Nuclear Regulatory Commission taking action, the scab replacement workers caused a number of accidents. In 2011, International Association of Machinists Lodge 778, employed as nuclear weapons workers at Honeywell’s Kansas City, accused the Department of Energy of abandoning its legal mandate by not stepping into to stop a concessionary contract Honeywell was pushing on the union. (Note: I have written over two dozen articles on this issue since 2009; for more details on the federal government enabling Honeywell anti-union strategy, see my November 2011 piece, “Is the Federal Government Helping to Bust Unions?”)

The recent leaked documents raises serious questions about whether Honeywell benefited from its relationships with the Obama administration as part of its anti-union maneuvers. The White House did not respond to request for comment.

It's not uncommon for corporations to invest this level of planning into combating organized labor. As I reported for Working In These Times, corporate executives from a number of companies attended a conference in Arizona in May on how to lock out workers and bust unions--headlined, oddly, by Henry Winkler, a.k.a. the Fonz.

Another section of the confidential documents lays out a comprehensive plan to bust union organizing. First, the document suggests a company-wide “Corporate Campaign Risk Assessment System” that “would be a tool used to identify those sites that are at a greater risk of becoming involved in a corporate campaign and to then prioritize the sites for preventive and counter measuring planning. ... The Corporate Campaign Risk Assessment Survey would give the LER (Labor Relations) team scores on the high risk areas to determine whether or not these sites could be the local campaigns that acts as a 'toe hold' for unions to launch a corporate campaign against Honeywell.”

Then, as soon as there are union rumblings at a non-union Honeywell plant, managers are instructed to inform Honeywell’s HR Department, which then informs Honeywell’s Labor Relations Department (LER), which "puts plan in place on the ground and immediately visits the site." The LER is told to dispatch one or two representatives from the Burke Group, a notorious anti-union firm that was used by Honeywell during the 14-month long Metropolis lockout. Next, an official boardroom is "set up on site to implement daily operations," including “employees paid to sit and listen to anti-union campaigns.” Honeywell supervisors are advised to obtain the proper legal assistance in struggle with unions, to secure Honeywell property and to train local security personnel in "warning signs of union activity."

“These documents reinforce what we have believed all along that this is a company that isn’t interested in getting along with their labor groups. This also proves that they see us as a threat,” says USW Local 7-669 President Stephen Lech, whose photo is included in the document's description of the Metropolis lockout. “As far as us being mentioned so much in these documents, I am kind of honored that our union had that kind of impact. I am flattered that the company is going to fashion a whole plan based on the labor struggle at Metropolis. They learned a lot during that process and we learned a lot to, but we can change our labor strategy a whole lot quicker than theirs."

UPDATE: In an statement emailed to In These Times after a mutually agreed deadline, Honeywell spokesperson Victoria Ann Streitfeld wrote:

This document was prepared by summer interns, not full-time Honeywell employees, and as such should not be considered to reflect Honeywell’s positions or policies.

Honeywell’s preference is to work directly with its global work force, but also respects the rights that employees have to form unions or acquire union representation when they choose to do so.

Honeywell works closely with a wide range of constituents that are important to making our businesses successful, including employees, and where appropriate the unions that represent them, our communities, and their elected officials.

It's unclear from the document (which In These Times has made available for download here), whether the interns were proposing new policy or summarizing existing policy. What's clear is that they had access to an enormous amount of internal information. The 61-page PowerPoint presentation, marked "Honeywell - Confidential," contains indications that Honeywell had been tracking union activity at a dozen plants across the United States, complex metrics for analyzing the threat posed by unions, and a note about Honeywell's deployment of the Burke Group, an anti-union consulting organization.

It surprises me that they are denying that this is their company policy, because this is exactly what we saw in Metropolis. [The authors] are mentioning things in this PowerPoint that show they know exactly what Honeywell is doing. They knew about Metropolis, the Burke Group, they had pictures of our pickets lines, detailed information about company structure and union activity. This doesn't sound like the kind of information mere interns would have. And what they say about working with government officials is exactly what they did during the Honeywell lockout.

CORRECTION: In These Times initially misidentified one of the report's authors as Honeywell tech specialist Jeff Johnson; in fact, the author was a Honeywell summer intern also named Jeff Johnson.