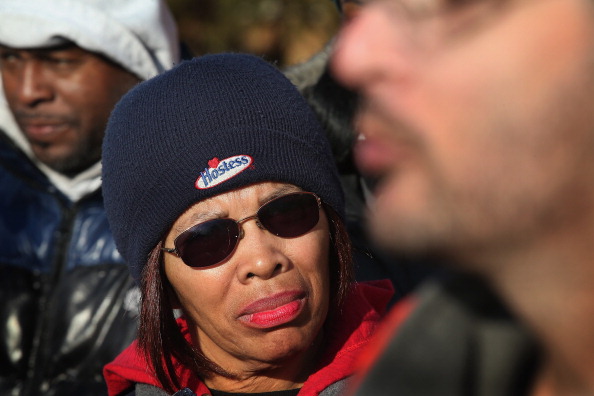 Hostess Brands is blaming its liquidation on this week’s strike, by workers such as these in Schiller Park, Ill. The company’s financial woes, however, are years old.   (Photo by Scott Olsen / Getty Images).

Today, the owners of Hostess Brands—the company that makes widely recognized baked goods such as Twinkies and Wonder Bread—made good on a longstanding threat to close down operations, eliminating as many as 18,000 jobs.

Company spokesperson Lance Ignon told Working In These Times that some 22 bakeries around the nation completed their last production runs early on Friday morning, while delivery drivers finished their final routes this afternoon. The company has no plans to resume operations.

In a statement, Hostess CEO Greg Rayburn blamed the shutdown on a strike this week by the Bakery, Confectionery, Tobacco Workers and Grain Millers International Union (BCTGM).

However, his scapegoating of the union obscures a larger and more complicated story of corporate mismanagement and naked greed. In fact, the company has been in severe financial distress for more than a decade, management has been in disarray, and vulture capitalists have been circling in search of financial prey.

Hostess might be considered an "old economy" company in the sense that it manufactured, produced and marketed popular cakes to a mass market. In its newest incarnation—under the slicker, greedier sensibility of Wall St.—it  is something else altogether.

Hostess claims that a BCGTM strike begun on November 9 was the company's undoing. The strike started at four scattered Hostess plants and spread across the country, forcing 11 bakery closures, according to Ignon.

The union, however, notes that the strike came only after months of fruitless contract negotiations and the imposition by Hostess of  “draconian cuts” to wages and benefits. Prior to that, employees of Hostess were working under reduced incomes for almost 10 years. From 2004 to 2008 the company, then called Interstate Bakeries, went through a Chapter 11 bankruptcy in which all union workers took forced cuts.

BCTGM President Frank Hurt was not available for comment on today, but told Working In These Times earlier this week that the BCGTM strike was the “tragic” result of the company’s ill-conceived plan to bust the unions, dismember the company and sell off the pieces to highest bidders. Hostess managers have made clear that they care little for the hardships imposed on the workers, Hurt said, leaving the union no choice but to strike in hopes of the bringing the company back to the bargaining table.

Hurt has made other comments over the last three months in which he made clear that he believes the owners of the company have no real desire to return the ailing Hostess to profitability. Rather, they want to strip the company of its valuable assets while discarding the long-term employees and financial liabilities.

Hostess confirmed at least part of Hurt’s analysis on Friday when the company also announced it wants to move quickly to sell its bakeries, distributions facilities, retail outlets and “popular brands.”

According to an article in Friday’s Kansas City Business Journal, that means the company will sell brand names such as Hostess, Twinkies, Wonder Bread, Ding Dongs and Ho Hos. Food industry analyst John Stout Jr. believes such sales would allow other businesses to resume profitable manufacturing of these products in other facilities.

Such a plan will require the approval of Judge Robert Drain of the U.S. Bankruptcy Court for the Southern District of New York. Hostess filed a Chapter 11 bankruptcy petition in Judge Drain’s court early this year, and under bankruptcy law most major business decisions at Hostess require his approval. Indeed, the imposition of the brutal wage and benefit cuts on BCTGM members was specifically approved by Judge Drain in October.

Hostess spokesperson Ignon said the company plans to be back in Judge Drain’s court next week to seek his okay for measures to further wind down operations. Hostess will not seek a formal conversion to a Chapter 7 liquidation proceeding, but rather a continuation of the status quo, in which the current owners and managers maintain control of the company, he said.

Whatever happens in Judge Drain’s bankruptcy court next week, an estimated 18,000 Hostess workers will have no job to return to Monday.

The company has been maintaining a payroll of 18,300 to 18,500 workers, Ignon says, and most were laid off Friday. An undetermined number of managerial and administrative workers will be retained for the immediate future, he adds, but it is too early to give exact numbers.

About 5,000 BCTGM workers will lose their jobs, along with 7,500 members of the International Brotherhood of Teamsters and hundreds of members of ten other unions representing smaller sectors of the Hostess workforce.

CEO Rayburn’s Friday statement made no mention of any assistance that the company plans to offer the newly jobless employees.