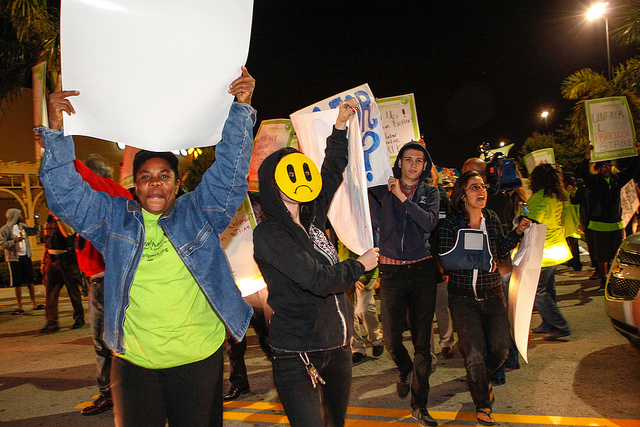 Our Walmart members and supporters protest outside a store in Miami, Florida, on Thanksgiving night.   (Courtesy of Our Walmart)

On the seventh anniversary of working at a Walmart store in a Chicago suburb, Charmaine Givens-Thomas nervously spoke into a bullhorn to explain why she was standing outside a Walmart parking lot so early on this cold morning of the day after Thanksgiving -- Black Friday to bargain hunters and merchants alike.

"I'm standing up for all Walmart workers around the country so Walmart will give us a living wage and so Walmart will stop retaliating against us when we speak up," she told the cheering crowd of around 250 supporters, drawn from an assortment of community and labor groups. "I want them to understand we just want to be able to pay our bills from one paycheck to the next and for them to respect us."

Across the country, in more than 1,000 actions, Walmart workers and supporters from the broader public delivered the same message last Friday, according to Organization United for Respect Walmart. More commonly known as OUR Walmart, it is an association of Walmart workers launched in June 2011 with support from Making Change At Walmart, a community-labor coalition previously initiated by the United Food and Commercial Workers (UFCW) union.

The actions ranged from the embryonic to the fully grown: A lone worker in Maryland went out on strike against illegal retaliation and threats by Walmart management, then handed out to customers leaflets she had made while carrying her homemade picket sign. Meanwhile, at the Paramount store in southern California, more than 1,00 workers and, primarily, sympathizers protested. There were successful rallies in big cities all over the country--such as Dallas, Los Angeles, the Bay Area, Milwaukee, Washington D.C., and Miami.

Workers and allies even protested in Little Rock, Ark., in the shadow of the Bentonville, Ark., behemoth. Cayt Lawley joined the protest there, not the suburban Walmart where she worked until she was fired. She has charged Walmart with an unfair labor practice, arguing they dismissed her because she was a leading spokesperson for an organizer of workers in her store, not--as Walmart says--for the minor slip-up that her supervisor initially said was no problem.

"Now my co-workers are afraid to talk with me. They fear retaliation, for their jobs. It's really sad," she says. "But the strikes were phenomenal. I know there's a buzz in the stores. Seeing workers who struck walking back in is really empowering. I think membership will go up."

At least 500 Walmart workers walked off their jobs, according to a preliminary count, Making Change At Walmart Campaign Director Dan Schlademan said, making it the largest U.S. strike in the history of Walmart.

The actions formed the climax of a crescendo of strikes and protests by Walmart workers in both warehouses and retail stores that started in September and continued through to the eve of Black Friday's nationwide onslaught. For example, on the preceding Saturday--November 17--workers at a giant Walmart distribution center in Elwood, Ill., met up with a delegation of about 20 community supporters associated with Warehouse Workers for Justice, who brashly walked into the cavernous warehouse. Together they presented similar demands for respect, improved working conditions and and end to retaliation to a silent, seething supervisor.

At least 150 workers from all the subcontractor staffing agencies in the building had signed, a big step forward from September when only about 30 workers from a single contractor struck against unfair labor practices by management, successfully winning improvements and returning to work with back pay. But some managers apparently learn slowly and fired four of the workers as they presented the petition, even though such collective activity is protected under federal labor law.

Walmart minimized the strike, noting that few workers out of the 1.4 million U.S. employees had left work, claiming absenteeism was less than last year and sales higher for the day (as might have been expected with an improving economy). But Walmart clearly was worried. Managers delivered messages attacking OUR Walmart in mandatory meetings with workers (often excluding known OUR Walmart supporters). The corporation also filed highly questionable charges with the National Labor Relations Board (NLRB) against the UFCW.

OUR Walmart fired back, citing threats that Walmart spokesman David Tovar made on television that "there could be consequences" for any striker (consequences that might include individual lawsuits against any strikers if the store lost sales, according to worker accounts of some store managers' threats).

In Chicago, as in most of the country, Walmart used its clout to get local governments to post large contingents of police to prevent protesters from entering the stores or even parking lots. Walmart also erected barricades in front of the stores.

Schlademan, offering a quite different assessment from that of Walmart, called the Black Friday protests/strike "amazing." He applauded "the courage of the Walmart workers as they went on strike, hundreds of them, even as the company was threatening them, illegally, with termination, with being sued personally if they went on strike. That workers withstood this threat and still went on strike on Black Friday is a testament to all those workers."

"Here is what’s so significant about this: this strike was about sending a message to Walmart that these workers won’t be silenced," he continued. "This wasn’t a strike to try to cripple Walmart’s operation. This wasn’t a strike to impact their Black Friday sales. This was an unfair labor practices strike to send a message to Walmart that your retaliation is going to get a response like this: it is going to get publicized, and a tool they’ve been using [against workers] is going to be used against them."

Rosetta Brown, an OUR Walmart member at a suburban Chicago Sam's Club, has been fighting Walmart for the 12 years she has worked for the company, and on Friday she was out on strike, Although she has organized at least 10 co-workers into OUR Walmart, she says most of the workers at her store said they were afraid to go out. But when she returned to work today, she was their hero.

"I've been getting congratulations all day, even in front of the manager," says Brown, who comes from a politically engaged family, including her mother, a union steward. "People have been high-fiving me. I wasn't afraid of getting fired. Now I think a lot of workers in stores who were afraid would walk out. We'd get a lot of support from them. They just didn't want to get fired. I'm not mad at them."

Walmart workers acting on their own organized much of Friday's activity. "This was a total open source moment," Schlademan says, "when we put out the call, gave people the tools, and people responded."

Post-strike organizing of new members will rely heavily on much of the same kind of self-organizing, led by workers like Linda Haluska, one of three strikers at her store. She walked out on her Thursday night shift, in part to protest the company's decision to open on Thanksgiving, which she believes contradicted its professed support of families.

Why take the risk? "Everybody in my family belongs to unions," she explained. "Solidarity is the key to America's success."