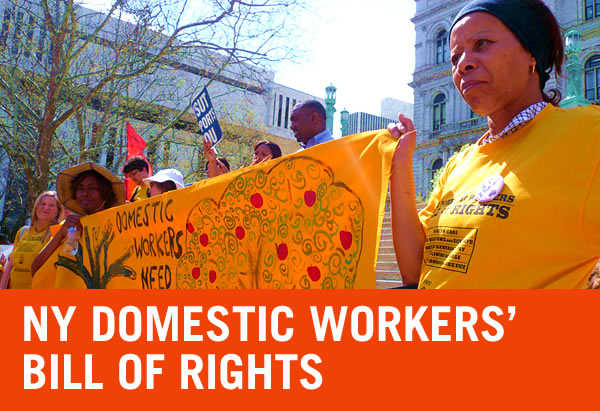 In 2010, New York domestic workers successfully lobbied for a state bill of rights guaranteeing them basic protections such as overtime pay and time off.   (Photo from DataCenter)

Domestic workers labor in some of the worst conditions in the nation, even though their workplaces are often the homes of the affluent. They work long hours, doing grueling manual and emotional labor, and have almost no legal protections from abuse.

Yet, under the auspices of Domestic Workers United and the National Domestic Workers Alliance (NDWA), they have also been responsible for some of the most exciting labor organizing of the past few years. Now, thanks to a new report released by NDWA, DataCenter and the Center for Urban Economic Development at the University of Illinois at Chicago, for the first time we have an empirical study of the conditions that domestic workers deal with every day.

The study, which domestic workers helped to design, surveyed 2,086 nannies, caregivers and housecleaners around the United States who hail from 71 different countries. They were interviewed in nine languages about pay rates, contracts, working conditions, benefits and workplace abuses. Titled “Home Economics: The Invisible and Unregulated World of Domestic Work,” the report was presented at the Ford Foundation Building in New York City. Its aim is to bring domestic work “out of the closet,” to shine a light on the often-brutal conditions faced by this workforce consisting primarily of immigrant women and women of color.

According to the report, 23 percent of domestic workers are paid below the state minimum wage, and 70 percent make less than $13 an hour. Of workers who live in the homes where they work, 67 percent make less than the state minimum wage: Their median wage is $6.15 an hour (and don't even ask about overtime). The report notes that domestic workers are exempted from the protections put in place by the National Labor Relations Act. When the Act was passed in the 1930s, most black workers in the South did either agricultural or domestic work, and not coincidentally, these two types of workers were excluded from the right to form unions.

Without such protections, these sectors remain grossly exploitative, standing out even in a culture that has little respect for workers overall—as Ana Avendaño, the AFL-CIO's Director of Immigration and Community Action pointed out. Furthermore, many immigrant domestic workers are undocumented, which leaves them even more vulnerable to abuse: Employers can squelch complaints with the threat of a phone call to Immigration and Customs Enforcement.

At the report's unveiling, two panels of experts, which I attended, discussed its grim findings and offered possible solutions. Jared Bernstein of the Center on Budget and Policy Priorities (and formerly of the Obama administration) noted that domestic work differs from other kinds of low-wage work in at least one useful way: It cannot be outsourced. “Domestic work is a critical input into the way we work today in America. A lot of what we do here would fall apart without domestic workers,” he said. “Which means domestic workers should have more leverage than they do.”

Nik Theodore of the University of Illinois at Chicago argued that there is nothing inherent in domestic work that justifies low wages—it's the lack of protections for workers that allows employers the upper hand.

“It's a five-letter word called POWER,” agreed Bernstein. “The power structure that determines what people are paid is deeply screwed up.”

Working in someone's home, isolated from others, leaves domestic workers uniquely vulnerable. The survey noted that 42 percent of workers fear not just losing their job, but actually fear employer violence if they speak up about their working conditions—even as many of them suffer joint pain, skin irritation, injury or illness on the job, and only 4 percent of them get employer-provided health insurance.

Isolation has also made it hard to organize them. Barbara Young, a national organizer with NDWA and 17-year veteran of domestic work, told the audience that she was recruited by a DWU organizer in the playground as she watched her charge. For workers in the suburbs, it's far more difficult to connect to groups fighting for domestic workers' rights. And their lack of free time makes it harder for domestic workers to spend time on political action—as Kristin Rowe-Finkbeiner of MomsRising noted, many of them aren't even given sick days. “If you can't barf, you can't go to the state capitol.”

The emotional intimacy as well as physical closeness of domestic work, the report and panelists noted, winds up being a site of exploitation as well. Employers often refer to nannies, housecleaners or caregivers as “part of the family,” but, as Caitlin Flanagan, Atlantic journalist and famous employer of nannies, noted, “There's not a lot of family members you can fire.” Domestic workers can be enticed to stay in punishing workplaces because they develop genuine bonds with those they care for. But employers rarely consider this connection when firing workers.

Of course not all employers of domestic workers are abusive; Ai-jen Poo, head of NDWA, mentioned Hand in Hand, an alliance of domestic employers who want to make it easier for employers to do right by their employees. Many employers have trouble considering their home a workplace and so don't do things such as pay into Social Security for the domestic workers they employ.

Bernstein called for stricter regulations and stricter punishments for employers who break the rules: “They're gonna get away with what they can get away with,” he said.

But Avendaño argued that, to really change the lives and conditions of domestic workers, “you need to have workers who are empowered, educated, and organized to hold employers accountable." In other words, regulations aren't enough if workers are too afraid to blow the whistle on their bosses.

The second panel, featuring Poo, Rowe-Finkbeiner, David Rolf of SEIU Local 775 and Orlando Bagwell of JustFilms, focused on how to create a 21st century labor movement. Poo explained a new tool, an online matching service to help workers and employers who want to treat them right find one another, a sort of Internet-age hiring hall that she laughingly compared to a dating service.

The undisputed point, however, was that domestic workers are workers; that even though they labor outside of the public eye and away from the reach of the NLRB, inside the glamorous homes of the wealthy or even just those of the harried middle class, their work deserves fair wages and conditions. It wasn't, after all, some inherent quality of industrial work that made factory jobs into good jobs—it was organizing. As Rolf argued, “We don't need to make domestic work more like 'real work.' It is real work.”