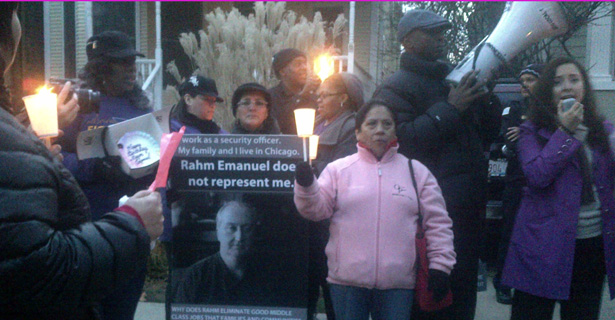 Chicago airport janitors gathered outside Mayor Rahm Emanuel's house Nov. 29 to wish him a happy birthday—and to voice their displeasure with the city's decision to hire a new, cheaper contractor at O'Hare International Airport, which will likely result in job losses and cuts to wages and benefits.   (Photo by Kari Lydersen)

CHICAGO—A diverse crowd gathered outside Chicago Mayor Rahm Emanuel’s home as dusk fell Thursday, Nov. 29, holding candles and a small cake and singing “Happy Birthday” in Polish, English and Spanish to the mayor, who turned 53 that day. The group, airport janitors represented by SEIU Local 1, said they were “happy that the mayor gets to celebrate.” But several said they don’t see themselves celebrating their own birthdays or Christmas this year, as they are likely to lose their jobs or take drastic cuts to wages and benefits in a few weeks because of the city administration’s decision to hire a new, cheaper contractor at O’Hare International Airport.

For three weeks the union has been calling on the mayor to “walk a day in the shoes” of airport janitors, to learn firsthand how they do their job—keeping O’Hare “one of the cleanest airports in the country,” even though it is one of the busiest, as SEIU Local 1 Secretary Treasurer Laura Garza put it. Having received no response so far, Garza said, the union decided to pay the mayor a birthday visit at home. No one came out of the mint green house with two pumpkins on the porch, but the light of a cell phone or camera was visible inside as someone pulled aside the edge of a curtain.

About 300 janitorial jobs at the airport were privatized in 2005 under former Mayor Richard M. Daley. But workers said they were happy with the contractor who employed them, the company Scrub Inc., in large part because the union had successfully fought for wages of $15.45 an hour and solid benefits. After Scrub’s contract expired, the city accepted a bid from a different employer, United Maintenance Company, which has announced it will pay $11.90 an hour, likely without health insurance or other benefits, according to the union. And the workers likely will lose union representation, as the company isn’t bound by a contract with SEIU. Current workers might not be rehired at all.

“These workers are working check-to-check already. This is going to create poverty jobs at the airport,” said Garza. “[Emanuel] claims to be creating jobs, but he’s eliminating middle class jobs…They are mostly people of color, immigrants who came to make a better life for their families.”

Many of the janitors wore large stickers on their backs with the phrase “Mayor Emanuel: Job Killer” alongside a photo of the mayor looking confrontational and the Twitter hashtag #Mayor1percent. Several pointed out that they had voted for the mayor and implored him to “make our votes count.”

Geneva Daniels, who held the pink and blue cake with icing script that read “Happy Birthday Mayor Emanuel,” has worked at O’Hare for almost 10 years—after leaving Emanuel’s house she was headed to her night shift.

“We want to tell him ‘don’t close the door on us,’” she told Working In These Times. “The union fought hard for us to get these benefits. We don’t want to be rich, we just want to get by. Now they might do us harder than Hostess Twinkies. This could send us out to live on the corner.  I have an apartment, the landlord wants rent—he doesn’t want to wait for an unemployment check.”

She noted that two of her brothers died 10 days apart, and she wants to be able to help provide for her nieces and nephews. “I want to be able to do something for them, to take them on a vacation,” she said.

The union has been pushing a Responsible Bidders Ordinance in city council that would mandate private companies with concessions at the airport rehire current workers for 90 days and other protections. It would also bar companies with past labor law violations. Garza noted that the janitors’ contract is not paid out of the general city budget, but rather through fees charged to airlines.

“This is not about the budget, this is not about saving money for taxpayers as the mayor says,” said Garza. “And when they are unemployed, where will they go for health care? To the county [hospital], where taxpayers will have the burden.”

Mildred Rueda, a young woman who has worked at O’Hare for seven or eight years, said she was “upset, sad and devastated” to learn she might be losing her job. “Now we cannot afford to buy gifts for our kids, our family members,” she said.

Andy Cwanek, speaking in Polish, told reporters, “We don’t want to be a burden to anyone, we want to support ourselves… We don’t want to go to the unemployment office. Let us work.”