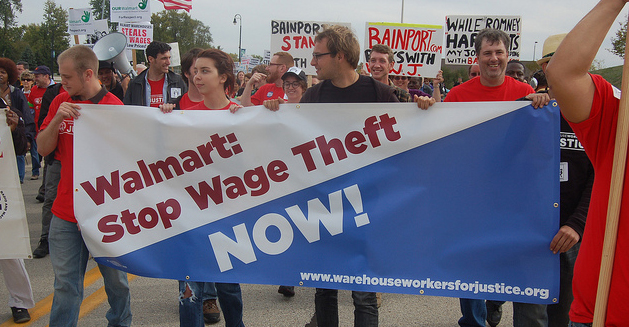 The past months have seen a wave of strikes and demonstrations protesting Walmart's labor practices, including this rally in Elwood, Illinois, on October 1. Now the retail giant has been added as a defendant in a lawsuit filed on behalf of workers at its Mira Lomo, Calif., warehouse alleging violations of federal and state labor laws.   (Peoplesworld/ Flickr / Creative Commons)

Walmart may soon find it harder to avoid responsibility, as it has in the past, for the mistreatment of workers in its long supply chain.

Lawyers who sued temporary labor firms in a giant Walmart warehouse last year for violating federal and state laws with their abusive labor practices today took what they described as the "historic" step of adding Walmart as a defendant in the case.

They claimed that their investigation and depositions undertaken for the original suit filed in October 2011 show that Walmart really  "calls the shots" at the warehouse and should be held liable along with its subcontractors for "stealing millions of dollars from the low-wage warehouse workers who move Walmart merchandise," as Michael Rubin, an attorney for the workers, wrote to the Center for Public Integrity.

At the Mira Loma, California, warehouse owned by Walmart and exclusively serving its stores and other distribution centers, Walmart contracts with Schneider Logistics to run the operation. Schneider provides the workforce, most of whom are temporary workers—often long-term permatemps—hired through staffing agencies who are subcontractors.

Workers, with the help of Warehouse Workers United, have protested violations of federal wage and hour legislation—such as failure to pay overtime premiums and paying less than the minimum wage, unsafe conditions, retaliation for legal collective action and other alleged abuses at the warehouse—for more than a year, including going on strike and undertaking a long march from their Inland Empire worksite to Los Angeles in October.

After it was added to the suit, Walmart continued to deny that it played any role in managing the warehouse and to assert that it bore no responsibility for any violations of laws. Analysts of Walmart's corporate strategy argue that it, like many big companies, increasingly turns to contractors for labor to avoid being responsible for workers.

But Kevin Kish, one of the workers' attorneys, said that while Walmart's name was not on paychecks or the workers' mandatory t-shirts, "it is clear that ultimate responsibility rests squarely on the shoulders of Walmart."

The updated charges included six theories supporting the claim that Walmart is legally a joint employer and shares liabilities with the contractors, arguing that the relationship is not that between an arm's length provider of services or goods, like a painting contractor or bookkeeping firm that a small business might hire. The amendment to the lawsuit calls Schneider "closely-controlled" by Walmart—until last year most if not all Schneider managers had walmart.com e-mail addresses—and notes that a Walmart-owned security firm is responsible for protecting the warehouse.

The attorneys said the facts uncovered in their investigation showed that the "economic realities" of the operation of the warehouse establish Walmart's legal resposibility. As Kish and Rubin said, Walmart owns the warehouse, owns all the equipment and supplies, uses the same systems as in warehouses it directly operates, and not only had its own employees in the warehouse overseeing operations but also conducted regular audits that became the basis for changes in operations.

Walmart also set the dominant standard for evaluating performance at the warehouse: efficiency and lowest possible cost per carton, providing incentives to Schneider and others to cut corners and break laws. And because of its pervasive control, the new charges argue, Walmart is in the best position to make sure changes ordered through any injunction will take place.

"The boxes say Walmart. The containers say Walmart. Everything belongs to Walmart," said David Acosta, a warehouse worker and plaintiff in the lawsuit. "We need Walmart to take responsibility for all the stolen wages. They have the power to act."

Most of the theories supporting the charge that Walmart is a joint employer and jointly liable have been upheld in court or, more often, were argued in cases that ended in an out-of-court settlement by the defendant companies, Rubin says.  But a decision in this case—especially considering this is the first time that Walmart, a major user of subcontractors, has been named—could have wide ramifications.

"If we go to judgment," Rubin said, "this will be the first case that adjudicated these claims and established this joint and several liability despite setting up several layers of deniability through the contractors."  Establishing Walmart as the ultimate and joint employer for federal wage and hour laws could set a precedent useful in establishing the obligation of Walmart to accept legal responsibility under other laws, such as those governing who is the real employer if warehouse workers organized a union.

"There could be all sorts of implications to a case like this for organizing, including self-organizing and all sorts of liabilities," Rubin said.