The Just Dining Guide: Where Not To Eat in Madison 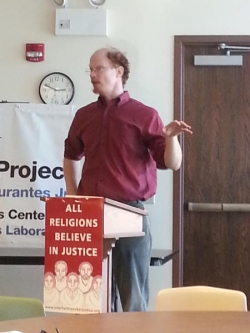 On Tuesday, two workers’ rights group partnered to release a dining guide based on labor standards for Madison, Wis., with hopes to expand the project and encourage groups in other cities to pursue similar projects.

The Just Dining Guide gives restaurants a star for each of seven requirements of a “good job” that they meet, from an $8.75 starting wage for non-tipped employees to paid sick and vacation days and retirement contributions for full-time employees. The information was gathered through surveys of both workers and employers.

The project began when the Workers’ Rights Center (WRC) in Madison found that many of the workers who came to the Center to report labor violations in their workplaces were in the restaurant industry, nearly 25 percent. The restaurant industry employs roughly 10 percent of U.S. workers, almost none of whom have union representation. A February 2011 report from the Restaurant Opportunities Center-United found that nearly half of restaurant employees have experienced a labor law violation at work, and the minimum wage for tipped employees has not risen in 21 years.

Interfaith Coalition for Worker Justice Director Rabbi Renee Bauer and WRC director Patrick Hickey said there were three audiences for the Just Dining Guide: the public, employers and workers. The Guide is a resource for members of the public who want to support businesses that treat their workers fairly, a request both organizations hear frequently. It’s also meant to highlight employers who are doing right by their workers, and to show those who aren’t that “good jobs and good business go hand in hand,” Bauer said..

Finally, releasing data about salaries and benefits in the industry to the public helps workers know whether they’re getting a fair deal from their employer relative to the rest of the industry. “It really increases workers’ ability to negotiate for fair wages and benefits when they have this kind of information,” said Hickey in the groups’ press release.

Two businesses have already changed their workplace standards in reaction to being surveyed for the project. The Weary Traveler, a pub, decided to review its employees in response to the project and found it could afford to give most of them a raise. A separate group of nine restaurants called Food Fight decided to bump its starting non-tipped wage up to the Guide’s minimum standard of $8.75 an hour. Wisconsin’s minimum wage is $7.25 per hour and the “living wage” Madison requires city-connected businesses to pay its employees is $11.82 per hour.

Asked whether she thinks the Guide will help organizing in the industry, Bauer said, “We would love to see that.”

“We want to get restaurant workers to see themselves as a group and by getting them together, improve the industry as a whole,” said Hickey. He added that the group could focus on a specific issue like paid sick days, or certain employers who treat their employees very poorly. To that end, the WRC is planning to stay in touch with workers who filled out surveys for the project in the hope of connecting restaurant activists to each other so that they can take on local issues.

Eugenio, a dishwasher in Madison who did not want to reveal his last name or place of employment for fear of reprisal, said he wants to stay involved in activism that comes from the project. He said he works “constantly—no breaks,” and has previously reported labor law violations at his restaurant to the WRC. Organizing and activism through the WRC, he said, can “help us get our wages we’re supposed to be getting.”

For its part, the ICWJ wants to organize an employer roundtable to get Madison restaurant owners to discuss the importance and benefits of treating workers fairly. It also wants to have more detailed interviews with employers that give a better sense of workplace conditions. “There’s certainly things that can’t be measured with stars,” said Bauer.