CNA and NUHW Join Forces Against SEIU in California 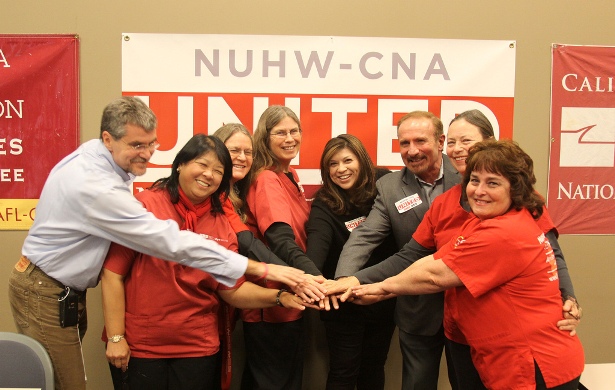 The CNA and the NUHW announced a formal affiliation Jan. 3 at a press conference in Oakland. (California Nurses Association / Flickr.)

Today, the California Nurses Association (CNA) and the National Union of Healthcare Workers (NUHW) announced a formal affiliation, solidifying an already potent alliance. Two of the biggest strikes against concessions in the last 16 months were conducted by members of the CNA and NUHW. Their target each time was Kaiser Permanente, the giant California health care chain that made $6 billion in profits since 2009 but still wants union job cuts and contract givebacks.

Last August, CNA and NUHW formed an “Alliance of Kaiser Unions” dedicated to “raising standards for Kaiser caregivers and protecting Kaiser patients.” In its founding statement, the Alliance blasted the Service Employees International Union (SEIU) and the SEIU-dominated Coalition of Kaiser Permanente Unions (CKPU) for choosing “to partner with Kaiser to increase the corporation’s profitability at the expense of their own members and patients.” The CKPU includes both AFL-CIO and Change To Win affiliates.

On January 3, CNA and NUHW took their recent workplace collaboration a step further, unveiling NUHW’s formal affiliation with CNA at a press conference in Oakland attended by activists from both unions. CNA and NUHW will now jointly seek decertification of SEIU in a unit of 43,000 service and technical employees at Kaiser.

In the fall of 2010, those workers voted, by a margin of 18,290 to 11,365, to retain their SEIU representation, rather than switch to NUHW. Illegal campaigning and collusion between management and the incumbent union led the National Labor Relations Board (NLRB) to order a new election in July 2011. Last month, a three-member NLRB panel in Washington, D.C. rejected SEIU’s latest attempt to overturn that decision, setting the stage for a likely 2013 re-run of the largest private sector representation vote in the last seven decades.

According to NUHW President Sal Rosselli, NUHW members approved the affiliation with CNA in mail balloting conducted in December. In material distributed to rank-and-filers before the vote, NUHW asserted that the agreement provides them with “full autonomy” and protections against trusteeship or forced mergers. “The unions will remain separate,” Rosselli said, “but we will act like one union when it comes to organizing hospital workers and fighting employers like Kaiser and Sutter Health.

As one benefit of affiliation, CNA will reportedly seek the same Kaiser workplace access for NUHW organizers as its own union reps enjoy; in the past, SEIU has been able to flood Kaiser facilities with hundreds of full-time staff and lost-time organizers due to its incumbent union status. CNA is also expected to fund greatly expanded hiring of NUHW organizers.

CNA currently represents 85,000 registered nurses (RNs) in California and helped form the larger network of state nurses’ organizations known as National Nurses United (NNU), which claims a national membership of 185,000 and has displayed some internal tensions of late. CNA also has a National Nurses Organizing Committee (NNOC) with bargaining units in Missouri, Illinois, Texas and Florida. NUHW’s organizational link will be with CNA directly.

The renewed partnership between CNA and NUHW marks the end of a nearly four-year-long truce between CNA and SEIU that expired on December 31. Since 2009, their peace pact helped reduce inter-union strife nationwide, while facilitating non-union hospital organizing in Texas, Florida, and other states. (Phone messages and emails seeking SEIU comment about the CNA-NUHW affiliation received no response.)

Stern’s controversial attempt to curb internal dissent over SEIU structure, bargaining and organizing strategy triggered the formation of NUHW, which has since won bargaining rights for about 10,000 California health care workers. That number includes 4,000 nurses and other Kaiser professionals who did switch from SEIU to NUHW three years ago and are still negotiating new contracts. CNA’s agreement covering 17,000 Kaiser nurses expires next year.

During the anti-concession walkouts at Kaiser last January and in September 2011, SEIU-UHW urged its members to cross picket lines set up by the 20,000 or more strikers represented by CNA, NUHW, or Local 39 of the Operating Engineers. Adding insult to injury, new SEIU-UHW President Dave Regan then made a failed attempt last summer to enlist California legislators and labor federation officials in an industry-backed attempt to weaken the state’s safe staffing law, which sets minimum nurse-patient ratios in hospitals.

Regan’s goal was to suspend (during RN meals and breaks) the nation’s first and only ratios law, essentially gutting a much-prized achievement of the CNA. In an internal message to CNA staffers last fall, CNA Executive Director Rose Ann DeMoro called Regan a ”management hack” who “may be the most despicable ‘labor leader’ that we have ever encountered” because “he has climbed so far into bed with the hospital association and employers.” According to DeMoro, “Regan argued on behalf of the California Hospital Association that nurses need to sacrifice their meals and breaks and the safety of their patients to help hospitals save $400 million because the state was in a budget crisis.” Meanwhile, state records showed that California hospitals collectively posted $4.4 billion in profits in 2010 alone.

DeMoro expressed additional concern about other deals negotiated by SEIU-UHW under Regan. At Sutter Health, for example, management agreed to rescind wage and benefit concessions already accepted by SEIU if CNA-represented nurses (or NUHW members) were able to resist such give-backs, by themselves, in the same hospital. According to CNA, “Regan’s actions have emboldened Sutter’s already hard line that has provoked a long contract dispute with RNs.”

To secure a more reliable “united front against Kaiser and other employers in our upcoming bargaining,” CNA began vying with the International Association of Machinists (IAM) as a potential NUHW merger partner. Last year, the IAM made a much-publicized commitment to fund NUHW’s systematic preparation for the still-pending Kaiser re-run election as a first step toward affiliation.

An internal political shift on the Machinists’ side has now led to a friendly parting of ways between the IAM and NUHW, clearing the path for a more organic CNA-NUHW connection, that will also permit the previously independent NUHW to become AFL-CIO-affiliated.

CNA’s latest change of course, vis-à-vis SEIU, has been cheered by California health care workers, whose workplace cooperation was never much affected by DeMoro’s détente with Stern (and with his successor, Mary Kay Henry). In January 2009, DeMoro accurately warned that Stern’s “dictatorial receivership” over UHW, which first brought Dave Regan to California, posed a direct threat to “the workplace protections and contract standards of CNA/NNOC members.” To meet this challenge, CNA initially provided $2 million in loans or grants to NUHW that helped keep the new union afloat until UNITE HERE kicked in another $1.3 million (after Stern launched an attack on that fellow Change to Win affiliate later in 2009).

On March 18, 2009, however, Stern and DeMoro suddenly declared that “we are burying the hatchet.” This was only one year after SEIU protestors tried, unsuccessfully, to disrupt the 2008 Labor Notes conference because DeMoro was an invited speaker. The two former union rivals unveiled a “transformative cooperation agreement” that was going to boost labor’s ill-fated campaign for the Employee Free Choice Act and state-level lobbying “to adopt single-payer health care systems.” (SEIU and CNA never ended up working together on either of these projects.)

Both parties agreed not to poach each others’ members, and CNA cut-off funding for NUHW organizing. In a June 2009 interview with Labor Notes, CNA co-president Deborah Burger defended this painful abandonment of NUHW supporters. She blithely predicted that “Andy [Stern] and Sal [Rosselli] will do what they need to survive” and “work out their own deal.” In the meantime, “other unions will help NUHW. And we’ll all move forward together.”

Burger claimed that her union’s truce with SEIU somehow granted CNA “exclusive jurisdiction on all nursing issues in nursing practice”—in a field where multiple unions, including SEIU, AFT, AFSCME, and others continue to represent several hundred thousand RNs nationwide. Recalling past SEIU efforts to “water down the [California] ratio bill, by putting forward ratios for all health care workers,” Burger declared that now “we won’t have anybody undermining, say, our ratios bill.”

While post-trusteeship UHW proceeded to undermine CNA in California on both legislative matters and in contract negotiations, joint union campaigning with SEIU at Hospital Corporation of America (HCA) did produce out-of-state membership gains for the CNA-backed National Nurses Organizing Committee (NNOC). In 2010-11, CNA won the right to represent nearly 6,500 nurses at HCA hospitals in Florida, Texas, Nevada and Missouri. At Tenet Healthcare, both CNA and SEIU were recognized under the terms of a similar organizing rights agreement (mandating management neutrality) that brought another 1,500 RNs into NNOC in Texas. During this multi-state campaign, SEIU won bargaining rights for more than 15,000 HCA and Tenet workers.

Coordinating with SEIU on first contract bargaining at HCA, the world’s largest for-profit hospital chain, proved harder than working in tandem to win union recognition. Eager to begin collecting dues, even though its hospital units had generally low membership in open-shop Florida, 1199/SEIU (also known as United Healthcare Workers-East) settled months ahead of NNOC at 10 newly organized HCA facilities there. According to one NNOC organizer involved, “SEIU had no organization and, as is its practice, clearly had a pre-cooked agreement with the corporation to settle for a substandard contract.”

SEIU’s settlement included a California-style “me-too” clause insuring that, if NNOC negotiated a better health care cost-sharing formula, the same terms would also be extended to SEIU, even though the latter had already settled for less. New members of the NNOC at HCA in Florida ratified their first contract last May, after an active contract campaign that enabled them to resist some management demands that SEIU acceded to.  NNOC members took strike votes, conducted whistle-blowing press conferences, and held informational picketing about staffing levels and the quality of patient care. Unfortunately, an overly broad “no strike clause” agreed to by SEIU first, and then NNOC as well, limits similar protest picketing during the life of the agreement.

Round Two at Kaiser?

Participants in today's press conference envisioned a different scenario in California if NUHW succeeds in replacing SEIU-UHW as Kaiser’s largest union, with CNA help. There, at Sutter Health, and other hospital chains, the two unions plan to coordinate their resistance to management demands for health care cost shifting, elimination of defined benefit pensions, and various forms of out-sourcing.

To win at Kaiser, NUHW organizers privately say they need prior personal commitments of support from nearly 18,000 workers. As of now, NUHW remains several thousand short of that goal. One issue that’s definitely aiding NUHW canvassing lately is Kaiser’s attempt to eliminate 1,000 jobs, a breach of job security commitments that SEIU-UHW is doing little to resist. Even an AFSCME local that has previously followed SEIU’s lead at Kaiser has protested this lay-off threat and announced it was boycotting Labor Management Partnership meetings until the issue was resolved.