No Comp Time for Newtown Police to Cope with PTSD; ‘Wellness Cops’ at Work; NLRB Beefs Up Back Pay 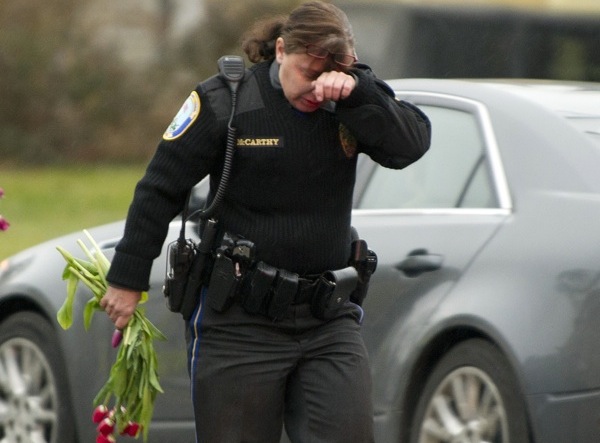 A police officer wipes her eyes as she removes flowers left for the Sandy Hook Elementary school victims from a busy intersection in Newtown, Connecticut, on Dec. 16, 2012 to avoid a traffic hazard.   (Don Emmert/AFP/Getty Images)

AFSCME is upset that police officers in Newtown are being denied workers’ compensation for time off to cope with Post Traumatic Stress Disorder they're suffering as a result of responding to the shootings. From AFSCME’s website:

To the 15 police officers who rushed to the school that day, it was by all accounts the worst crime scene they’d ever walked into.  They were in shock for days. In the aftermath of the massacre, a few of these officers—all members of the Connecticut Council of Police Unions (AFSCME Council 15)—are suffering from severe emotional distress and have been unable to return to work. Traumatized by the senseless shootings, these officers had to take extended time off in order to recover.

Unfortunately, post-traumatic stress is not covered by workers’ compensation benefits under the town’s current statute. Council 15 is working with local officials, state legislators and the governor’s office for a change in state law that would provide emotional trauma benefits and allow police officers to take more time to recover. The 2013 legislative session opened Wednesday.

“These officers have been unable to function due to trauma,” says Eric Brown, an attorney for Council 15.  “But under the circumstances, they are forced to use sick and vacation time and could soon be at risk of going without a paycheck. The emotional loads they’re carrying far exceed anything they could imagine. We need to support them in every possible way.”

The owners of Philadelphia’s major newspapers are threatening liquidation if the newspaper unions don’t agree to major concessions. From a letter from Newspaper Guild/Communication Workers of America Local 38010:

Interstate General Media today threatened to liquidate or sell the assets the company, which owns the Philadelphia Inquirer, Philadelphia Daily News and Philly.com, as of January 18, 2013 if it does not reach tentative agreements with all of its unions, including the Newspaper Guild.

Last summer, IGM ownership asked that the Guild volunteer to take pay cuts a year ahead of our contract expiration in order to help the company which was hemorrhaging money. The company seeks to cut $8 million out of our wages and benefits.

While bargaining with the other unions, the company shamefully, and repeatedly assured the other groups that the Guild would be opening its contract and giving concessions at this time. Nice of them to have such confidence that we simply couldn’t wait to give up our pay.

Increasingly, companies are pushing wellness programs that financially incentive workers to stay healthy. However many workers complain that they feel intimidated by these programs. From Labor Notes:

John Borsos of the National Union of Healthcare Workers sees problems in the ominously named “Total Health” program negotiated by rival union SEIU’s United Healthcare Workers West (UHW) at Kaiser Permanente in California. Employees are to receive a collective bonus if they improve their biometric scores (weight, smoking, blood pressure, and cholesterol) and if those improvements result in savings.

That creates an incentive for co-workers to become wellness cops. It’s a similar model to safety programs that pay a bonus to teams with so many work-days without a reported injury. Both are supposed to create positive peer pressure, but in the safety programs, it just creates pressure not to report accidents. With “Total Health,” it is likely to add stress as co-workers eye each other to see if they’ve gained weight.

... At another SEIU workplace, Alta Bates Summit Medical Center in the Bay Area, workers who don’t participate in wellness must pay 20 percent of their monthly premium. No one can afford not to participate, says transport dispatcher Keesha Johnson, even if they think it’s “overkill.”

At the Pump Handle, former OSHA official Celeste Monfronton blasts the Obama Administration for dragging their feet on their calendar for publishing workplace safety rules. From the Pump Handle:

... As I’ve written before, one aim of the agencies’ regulatory agendas and plans is to inform the public of the Administration’s current priorities and enhance planning for individuals and entities that may be affected by new or revoked regulations. For coal miners, the agenda may offer a hint at when to expect the Labor Department to begin enforcing a more protective exposure limit for respirable coal dust so their lungs might stave off black lung disease. Likewise, construction workers may get a better idea when they will have the same type of protection when working in confined spaces, such as storage tanks and pipes, as those that have been in place since 1993 for workers in other industries.

But ... neither OSHA nor MSHA are particularly astute at making realistic projections of target dates for proposing and finalizing new worker safety protections.

The NLRB has ameliorated tax and Social Security penalties for employees awarded back pay in labor disputes. From JDSupra Legal News:

In another bold move, the National Labor Relations Board (NLRB) has beefed up the requirements for back pay payments when an employer loses a labor dispute. Employees and their lawyers have long complained of the tax consequences of back pay awards under the National Labor Relations Act. In many instances, a charging party, who has successfully claimed to have been discriminatorily fired under the Act, has been required to pay more tax on a lump sum back pay award than he or she would have otherwise paid on the wages stretched out time. Also, an employee who has received a back pay award has had the wages applied to the current quarter, not the period of the alleged loss, for the calculation of Social Security benefits.

Now, the NLRB has decided, employers must gross up payments for back pay awards covering periods longer than one year. Also, the NLRB has held that employers have to file reports with the Social Security Administration ("SSA") for back pay awards, to ensure that the SSA allocates the back pay compensation to the appropriate time frame. The Board is applying this remedy retroactively "to all pending cases in whatever stage."