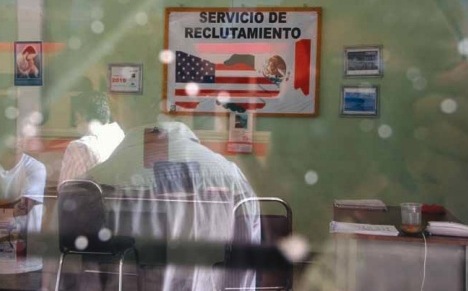 An ofﬁce of the recruitment agency Labors Mex USA in Celaya, Guanajuato. (Photo by Gracia Cuzzi, via CDM).

With President Obama vowing to push immigration reform, guest worker advocates want to ensure that the H-2 visa program—which grants temporary or seasonal U.S. visas to foreign workers in sectors such as agriculture—is on the agenda. All too often, advocates say, guest workers are forced by third-party recruiters to pay illegal recruitment fees, sometimes without receiving a job in return.

Hoping to jumpstart a conversation on these exploitative practices, the migrant-rights organization Centro de los Derechoes del Migrante (CDM) released a report on Thursday titled “Recruitment Revealed” that surveyed 220 guest workers from Mexico about guest-work recruiting abuses. CDM also unveiled a “Yelp-like” new online tracking tool that will allow guest workers to write reviews of the recruiters and their practices.

Adarely Ponce is one of those surveyed by CDM who reported being ripped off by recruiters. Ponce is 31 and lives in Hidalgo, Mexico, a rural region where there is little work available. Many who live there go seasonally to the United States as guest workers; Ponce has been to the United States nine times over the last nine years. In the process, she says, she has been scammed out of money by guest worker recruiters on three different occasions.

“The first time it was in my town and a man put up a flyer announcing jobs,“ says Ponce. “The flyer said I should go to his house for more information. He told me there was a job to work in apples in Michigan. He told us we would have to give him 1,000 pesos [roughly $100] in order to put our names on the list. No work showed up, so a few weeks later I went to his house and he said I would have to give him another 2,000 pesos [$200] to find work. A few weeks later, I went back and he told me there was no more work to be had.”

The amount of money Ponce lost was equivalent to what she could make in three months’ of work in Mexico. She says that approximately 50 others from her town paid the recruiter, only to receive no job and no refund.

The survey done by CDM shows that nearly 1 in 10 workers wind up paying recruiting fees for work that never emerges. Ponce did so twice more: once tricked by trappings of legitimacy, once just desperate for work.

Even when such fees do lead to work, they are still illegal. Yet 58 percent of H-2 guest workers surveyed were lured into paying recruitment fees. The average fee is $590, a massive sum for many Mexicans. Forty-seven percent of the workers surveyed said that they had to go into debt in order to pay the recruiters. Some took out loans with interest rates as high as 79 percent; others put up collateral such as their homes.

Despite both collateral arrangements and recruitment fees being illegal, guest workers have a disincentive to report them. If workers report these violations of guest worker programs, the contract with the guest worker program that they are sponsored under is often cancelled; resulting in the guest workers losing their jobs–and any collateral they signed over to recruiters. Such were the charges in the notorious Global Horizons case, in which the labor recruiting company came under federal investigation for allegedly holding Thai guest workers against their will in Hawaii (the case was dropped in August). Many of the workers said that they had not spoken out initially for fear of losing their families’ homes in Thailand.

Rachel Micah-Jones of CMD says that while the U.S. government oversees program sponsors and guest workers when they are in the United States, overseas recruiters are not properly regulated.

“In the immigration reform [conversation] there is a myth that employees need workers and they just sort of find each other,” says Micah-Jones. “There is no real conversation about how this happens. It’s a critical link that affects the relationships that workers have with their employers in the United States. “

Micah-Jones is hoping that the survey and the online tracking tool will not only help change the political conversation, but also help workers fight against recruiter abusers.

CDM hopes that policymakers will eventually adopt the online tracking tool on a large scale. Still, the barriers to reforming the guest worker program seem immense. Daniel Costa of the union-funded Economic Policy Institute says that despite the efforts to expose exploitative recruiters, employers are happy with the status quo and will be resistant to change.

“Now there is some hard data that advocates and policymakers can actually point to,” says Costa. “That being said, it's an uphill battle to get policymakers to be concerned about these types of worker abuses. First, you're dealing with a non-citizen, non-voting population, and some of the abuses don't even occur on U.S. soil. On the other hand, U.S. employers are benefitting hugely from increased profit margins from using guest workers they can legally underpay, and avoiding liability by using recruiters and subcontractors—and employers lobby hard publicly and privately (and contribute to campaigns) to keep the system the way it is. Between these two groups, who do you think policymakers are going to listen to?”