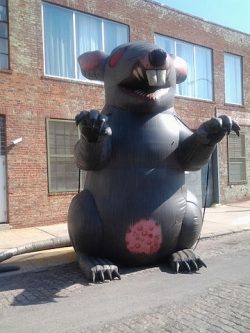 Go to any labor rally and you are likely to see a towering symbol of union pride: a 16–foot-tall, inflatable plastic rodent known as “Scabby the Rat.” Although “scab” is a derogatory word for temp workers hired by bosses during strikes, in Scabby’s case, it’s a term of affection.

According to the website of Big Sky Balloons & Searchlights, the exclusive makers of Scabby the Rat, the floats were originally designed for Chicago unions. Since then, “the rats have multiplied and are found thriving throughout the U.S.A.”

However, Scabby may be harder to find at rallies if one union leader gets his way. Today, Sean McGarvey, president of the 2-million-strong AFL-CIO Building and Construction Trades Department, tweeted, “Meeting with our Presidents and state councils. Issued a call to retire the inflatable rat. It does not reflect our new value proposition.”

“As usual, nobody bothered to ask the membership what we think about that!” Carpenters Union Local 157 member Gregory A. Butler wrote to me on Facebook. “I've been a shop steward for 15 years and I just found out about this decision from you! Sorry, but that's that bullshit.”

The Twitter outcry is a testament to Scabby’s immense popularity and visibility. “Our rats have been seen from the front page of the Wall Street Journal to the New Yorker,” boasts Big Sky’s website. “They have been in hundreds of newspaper articles and even appeared on several T.V. shows such as the Sopranos.”

Scabby the Rat is so frequent a presence at union rallies that in 2011, the National Labor Relations Board had to issue a special ruling on whether or not the inflatable rats were considered “picket signs,” which are prohibited at certain worksites under the Taft-Hartley Act. The NLRB ruled that the rats were exempt from the prohibition because the rat balloon itself “constituted symbolic speech.” Even anti-union groups have employed Scabby the Rat: Americans for Job Security used Scabby to protest what the group considered “the NLRB's Job-Killing Agenda.”

Cindy Harrity, a union organizer with CWA Local 1298 in Hamden, Connecticut says that her local union saved up for several years to the buy its own “Scabby,” which can range in price from anywhere from $2,000 to $8,000.

“I worked really hard to get that rat. We love our rat,” says Harrity. “It gets workers really enthusiastic at rallies.”

I tweeted at McGarvey to ask why he wanted to put Scabby out to pasture. He tweeted back, “The rat symbolizes intimidation tactics of 30 years ago. We want to engage owners re: our value proposition not threaten them.”

The AFL-CIO Building and Construction Trades Department did not respond to a request for elaboration. However, McGarvey and many other construction union leaders favor taking a “business-friendly” approach rather than adversarial approach to relationships with management. The council states on its website, “We will prove to contractors and owners that a partnership with North America’s Building Trades Unions is the best investment they will ever make.” Construction union leaders often publicly stress the value that their unions bring to companies, pointing to the fact that union projects are more likely completed on time without cost overruns.

In this context, abandoning Scabby the Rat appears to some union members like a call by such leaders to work out deals with management nicely, quietly and behind-the-scenes, instead of confrontationally, such as by placing giant 16 foot inflatable rats outside of corporate offices.

For rank-and-file dissident construction workers such as Gregory Butler, retiring “Scabby the Rat” symbolizes a turn back to the labor-management cooperation models that often left rank-and-file union members like him behind.

“I've been in this union for 20 years,” says Butler. “I got in when ’the men with the broken noses‘ ran it, so I know a little bit about intimidation. The rat was a symbol of the end of the era of the wiseguys and their-side deals with rat contractors. As for that ‘engage owners re: our value proposition’ Mark Breslin bullshit, I'm sorry, but the owners know they can get people to do our $ 46/hr jobs for $7. All the ’value proposition’ in the world isn't going to change that fact.”

Cindy Harrity of CWA just doesn’t get why the AFL-CIO construction unions would get rid of Scabby the Rat.

“I don’t know what that is going to gain a union,” she says. “The Building Trades think they think they should give up the rat ‘cause it’s intimidating. For one thing, let me tell you this: The rat is not that intimidating.” She notes, “A lot of times using that rat is the only thing we do to draw press.”