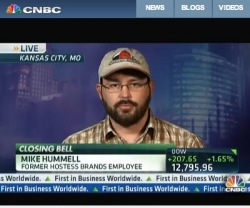 Just 12 short weeks ago, Mike Hummell found himself in the middle of one of the highest-profile union fights of 2012: the nationwide strike against Hostess Brands. As a member of the Bakery, Confectionery, Tobacco Workers and Grain Millers International Union (BCTGM), Hummell hit the picket lines in early November in support of the union’s desperate showdown with the company famous for making Wonder Bread and Twinkies. But for Hummell the strike would become more than an angry protest against Hostess’ assault on his livelihood. It would be the beginning of a journey through the electronic media in search of fairness for himself and his coworkers.

“It was incredible to see the strike portrayed in the media as the union forcing the company out of business,” says Hummell, a receiving clerk at the Hostess bakery in Lenexa, Kan. With 14 years on the job, Hummell was dismayed that media portrayals of the struggle showed little or no understanding of the workers’ viewpoint. Adding insult to injury, many news outlets blithely repeated Hostess’ assertions that the company would be destroyed by BCTGM’s refusal to make “reasonable” compromises, he says.

The facts, as Hummell knew from his years at the bakery, were quite different. Workers had already made broad concessions to help save the company, and the goal of the strike was to the hold the line against Hostess managers intent on busting the unions and dismembering the company. While some press accounts seemed biased or misinformed, equally troubling was that the main newspaper in the area, Kansas City Star, was ignoring the story. Hummel's wife sent in a complaint and a reporter soon contacted him.

“I got into an argument with them. I have to admit I was a little surprised when the the story came out and it was pretty accurate. They even quoted me by name,” he recounts.

Hummell then decided to make his own leap into personal journalism. Long a reader of the Daily Kos blog, he composed his first-ever post for the site. On November 18, Hummell—using the screen name Bluebarnstormer—blasted Hostess in a lengthy post titled “Inside the Hostess Bankery.”

“Wow, it just took off,” Hummell says. The post went viral, logging 261,723 page views in the following days. Indeed, it was so popular that Hummell’s work finished in second place in Daily Kos’ 2012 annual calculation of the site’s most popular reader posts. It was instant fame, of sorts. He was contacted by a news reporter for CNNMoney, and his comments received wide distribution. Hummell then received a call from a producer of the CNBC television network, asking that he represent the workers on a cable program with national distribution. He made two appearances on CNBC, during which he ably fielded hostile questions from both hosts and guests.

“The funniest thing about CNBC was the second time I was on, it was like they felt they had to have a whole crew of so-called ‘experts’ to prove I was wrong,” Hummell says. "Well, none of them seemed to know anything about Hostess." He says he received a lot of encouragement from his co-workers in his efforts to spread accurate information about the strike, as well as from officers of BCTGM Local 218, which represents Hostess workers in the Kansas City area.

His campaign was not successful, however, in deterring Hostess owners from their plan to close the company, dismiss all the workers, and sell off all the assets to the highest bidder. Currently, Hostess is seeking final approvals from a federal bankruptcy court for an auction of the company’s bakeries and other property.

But Hummel is not finished in his quest. He recently completed work on a 27-minute video, which he videotaped (with a help of a close friend) at a union meeting for fired workers. He hopes that a continued campaign to inform the public will aid Hostess workers in what he regards as a gross miscarriage of justice in Hostess's bankruptcy proceedings.

“It is absolutely a crime what has happened," Hummell charges. "The owners of Hostess have lied again and again, and there has been no accountability” from Judge Robert Drain, who oversees the court case.

Judge Drain, he says, has been complicit in the abuse of the bankruptcy court process and should be called to account. Hummell hopes that full public exposure of Hostess managers and of Judge Drain can insure that some of the cash generated by the sale of Hostess will flow to the workers.

As for his journey into the world of media, Hummell says he plans to go further. His public stand on behalf of the BCTGM members has led to an invitation to work with the International Longshoremen’s Association, he says. His experience over the last 12 weeks has convinced him that it is possible for rank-and-file workers to make a difference, he tells Working In These Times.

You can contact Mike at bluebarnstormer <at> yahoo <dot> com.