Cambodian Workers Wait for Wages in the Street, Shaming H&M and Wal-Mart 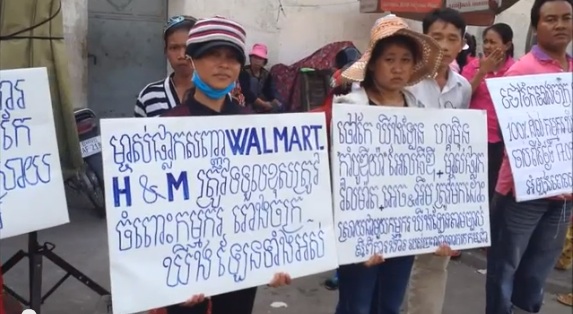 The women of the Kingsland clothing factory in Phnom Penh have been losing sleep over their jobs. It’s not the grueling hours and poverty wages that keep them awake, nor the threat of violent retaliation they’ve endured for trying to organize, nor even the unsanitary, dangerous working conditions they've often complained about. They’re used to all that; what they can’t stand is not being paid for their work.

Since the factory shut down weeks ago, workers have held a 24-hour vigil on the street to demand back wages and severance pay. The encampment marks their desperation to make their plight visible and to expose the open secret behind the underwear Kingsland has exported for years: that their cheap labor supplied the global retail empires of Wal-Mart and H&M.

Heoun Rapi, one of about 200 protesting workers, stated in a public declaration:

I am 6 months pregnant. It was difficult to work while I’m pregnant but even though it’s hard I need to struggle. I don’t know what to do. I can’t survive with the salary cut. I will protest like this until there is a solution. I want the factory and Wal-Mart to rush to give us our severance pay.

The factory reportedly laid off workers in September due to a lack of work orders, but promised to pay partial wages until work resumed in January. In December, the company union announced the factory had closed and that the owners had declared bankruptcy and apparently left the country. Though the details are still murky, it seems the factory may well be reopened at some point—potentially, advocates say, under even more precarious conditions than the already-miserable working environment prior to the closure.

In the meantime, workers remain in limbo, with no resolution over the question of legally entitled back wages or severance pay. The advocacy groups Community Legal Education Center (CLEC) and the Workers Information Center (WIC) are now pressuring Wal-Mart and H&M “to ensure that Kingsland owners pay all wages and indemnity and comply fully with Cambodian Labor Law.” The International Labor Rights Forum, which has long campaigned against Wal-Mart and other retail giants' exploitation of factory workers in the Global South, has been tracking labor disputes at Kingsland since 2007, when workers tried to form an independent union and were violently attacked. According to the workers’ account of one clash in February 2008, after an independent workers’ group launched a strike outside the factory:

[Workers] were forced to wait an hour and a half past their usual payment time when the police came and argued with the workers about public security issues. The situation escalated when police began to beat workers, also allowing company cars to crush the waiting workers. Because of this, 15 workers were hurt, five sustaining serious injuries, including five leg injuries and one broken hand.

The conflict drew the attention of global labor watchdogs, including the International Labour Organization (ILO) but despite attempts at intervention, mediation of the dispute foundered.

The current crisis at Kingsland continues to test multinational giants’ claims of deniability. Wal-Mart did not respond to an inquiry from Working In These Times, but in statements published via CLEC and WIC, the megaretailer claimed it stopped contracting with Kingsland in October 2011 and had “paid in full for all merchandise." H&M offered a more elaborate explanation, arguing that the factory was “not an approved supplier of H&M” but acknowledging previous unauthorized work, and that “the last H&M unauthorized production of garments in Kingsland was completed by July 2012.” With no official affiliation with Kingsland, the company stated, "Unfortunately as H&M does not have any business relation with this factory we are not in a position of exerting any pressure on the factory owner.”

Whatever date production actually ended, neither company seems interested in taking responsibility for the abandoned workers whose livelihoods had long depended on orders from their brands. The denials echo the claims of Wal-Mart late last year when it denied official connection to the Tazreen garment factory in Bangladesh after a horrific fire incinerated more than 100 workers and left several foreign labels, including Wal-Mart’s, in the ashes. Whether these multinationals are truly that ignorant about their subcontractors in Asia is debatable, but clearly, at the very least, malign neglect permeates every link in the supply chain. CLEC and WIC say the companies’ damage control tactics blatantly contradict the ethical sourcing principles touted in the corporations’ “social responsibility” policies.

As in other Asian export economies, Cambodia’s garment sector as a whole--the country’s critical, but volatile low-wage export industry--has been plagued by safety hazards and labor abuses. Joel Preston, an activist working with CLEC, tells Working In These Times: “Conditions at Kingsland were similar to those throughout the garment industry; poverty wage, forced labor of 12 hours per day, discrimination and violence against union leaders, fainting workers, etc.” On that last point, Preston was referring to spates of sudden faintings linked to hazardous and exhausting working conditions at several industrial facilities in recent months, including workplaces tied to brands like WalMart, Target, Reebok, and Urban Outfitters.

Anti-sweatshop groups have pushed for tighter regulation of the convoluted export supply chain and greater corporate accountability. Yet the business model of suppressing wages and labor conditions at the expense of equity and safety prevails. When they have no truly independent garment workers union, just the company or partisan unions that have long dominated Cambodian workplaces, Preston says consumer pressure is key for garment workers' struggles:

With the state of the rule of law in Cambodia, the fate of these workers often rests in the hands of consumers, observers and trade unions. … Will international trade unions and advocates stand behind these marginalized workers? In this case, the answer is yes. The international network is building and Walmart and H&M will be held to account.

In a country where people are worked until they fall unconscious, how long will it take for multinationals to wake up to their complicity in the horrific conditions of the industry status quo?