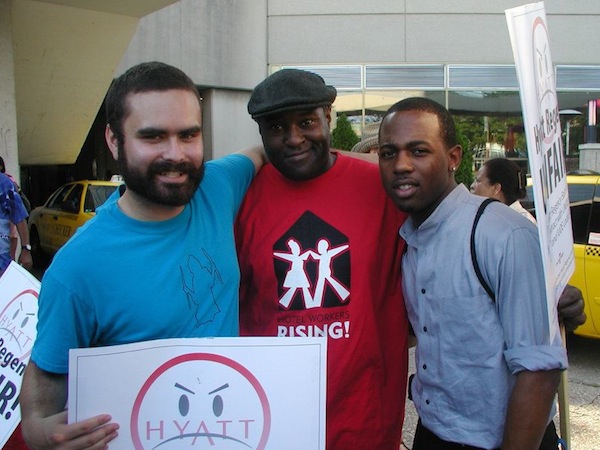 L to R: Hyatt workers Angel Castro, Mike Jones and Tarrance Taylor; Jones and Taylor were fired, then reinstated in an NLRB settlement.

BALTIMORE—Three hotel workers fired last year for pro-union activism at the Hyatt Regency Baltimore are back on the job this week as part of a January 26 deal to settle unfair labor practice charges brought by UNITE HERE.

Mike Jones, the last of the fired employees to resume his old job, reported for work this week. He's eager to restart his union organizing activities, he tells Working In These Times. (The story of Jones’ firing and his efforts to win his job back were the subject of a Working In These Times story in November of last year.)

The organizing campaign in Baltimore is part of the larger international Hyatt Hurts campaign launched by UNITE HERE in mid-2012. Since Jones’ firing, a formal hearing at the regional National Labor Relations Board was begun, and then abandoned when Hyatt and UNITE HERE Local 7 reached an out-of-court settlement of the charges. As part of the settlement, Jones and three other fired Hyatt workers were offered their old jobs back (one declined the offer), and hotel managers agreed not to discriminate against or punish union supporters in any way.

“So, it's back to storming the castle,” Jones says, making an explicit analogy between Hyatt hotel owners and the feudal lords of yore. For Jones, storming the castle means establishing a union, and returning some of the wealth produced by the hotel to the workers and the broader Baltimore community.

“When the Hyatt workers win—and they will win—it will be a big step forward in this town,” says Roxie Herbekian, president of UNITE HERE Local 7, the local seeking to organize the Baltimore Hyatt workers. The struggle at Hyatt is part of a broader movement going on across the city, Herbekian says, as service workers of all kinds struggle to raise living standards in a stagnant regional economy. She cites other Local 7 organizing campaigns—in the region’s growing gambling industry and in airport development—as examples of how low-income service workers are fighting back against corporate misrule and governmental indifference.

What ties these different service sectors together, she explains, is that they all receive official privileges or financial favors from the city. The Hyatt hotel, for example, is in Baltimore’s famed Inner Harbor and is technically only leased to Hyatt by its owner—the city government. The hotel was originally developed by the city some 30 years ago as a publicly financed effort to revitalize decaying sections of the downtown business district. Hyatt workers now find themselves in a position similar to poor tenant farmers, Jones says, but with their own city government as the landlord.

Likewise, the blooming gambling industry is wholly dependent on government licensing, and the growing BWI Thurgood Marshall Airport could not exist without state and federal financing, even as many of the service workers at the airport earn only poverty-level wages, Herbekian says.

Local 7 plans to spotlight the city's ownership of Hyatt in its unionization campaign this year. A number of low-profile meetings have been held in recent months with elected officials to gather support for the union, Jones says. A public test of strength for the union is currently scheduled for March 6, when the City Council expects to debate a resolution in support of the Hyatt workers.

It is a measure of the economic and political muscle of Hyatt that the results of the March 6 debate are not a foregone conclusion, Jones believes. Local officials seem timid in the face of large corporations like Hyatt, he observes, and the union faces a major challenge in solidifying political support for low-income workers against the power of Hyatt.

In the meantime, Jones says, he is pleased to be back at work. The settlement agreement with Hyatt forbids any retaliation for organizing, he says, so he is confident that as he resumes his regular job as a hotel steward, he can continue to agitate in favor of the union. Like many of the other local campaigns under the Hyatt Hurts umbrella, Local 7 is seeking a card check agreement with Hyatt that will allow the hotel to become unionized without an NLRB-supervised election, according to Jones. Hyatt has been adamantly opposed to card check, but the union expects that growing public support and political pressure will change the company’s mind, he says.