All Work and No Pay: Recognizing Women’s Unpaid Labor in the Global South 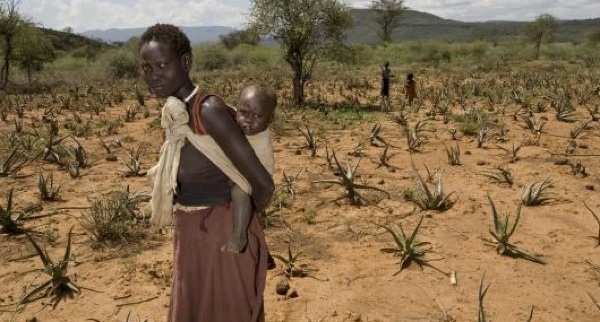 A Pokot woman with her child, tending to an aloe vera crop. Women around the world spend a great deal of time on unpaid care work every day, but such work often remains invisible.   (Des Willie/ActionAid)

Imagine being asked to work seven days a week, for free, without breaks or even a thank you. Those conditions might seem outrageous in any workplace, yet they are typical in our homes, where women are regularly expected to serve as faithful unpaid caregivers. Our recognition of the first scenario as a serious violation of labor rights, while the second can be brushed off as “tradition,” is a measure of the sexism still embedded in our thinking about economic equity in the U.S. and around the world.

While many of these debates have taken place in a Western context—the post-Feminine Mystique universe of fights over glass ceilings and parental leave policies—a different conversation is beginning in the Global South about how respect for women's household labor factors into a wider movement for economic justice.

A new analysis by the advocacy group ActionAid looks at case studies of women’s uncompensated work in Nepal, Nigeria, Uganda and Kenya as mothers, wives, managers of households and caregivers. The report concludes that women's unpaid daily tasks amount to a massive amount of time, energy and ingenuity that has been historically exploited and undervalued.

The report defines unpaid care work as home-based tasks like “cooking, cleaning, collecting water and firewood, and caring for the ill, elderly and children,” which are typically woven into interdependent relationships within communities and family structures. Not only is such work essential to maintaining the household; it is deeply interwoven with social development. Stability at home provides a base of security that enables other forms of economic advancement. Care work is of course crucial for children's development (as well as their future education), but it also enables male family members to engage in wage labor in the mainstream economy.

Yet the work women do for free involves long hours, no regulated break time and in some cases, abuse and coercion by family members. There are often huge social pressures to perform the work whether willing or no—such as to care for elderly family members in the absence of a strong healthcare or pension system. Yet the social burden of this gendered domestic labor reinforces gender hierarchies and, by extension, limits educational and job opportunities for women and their daughters.

For impoverished women, gender divides are sharpened by social marginalization. Poor women are often locked into relationships of dependency (on male "breadwinners"), while they face patriarchal subjugation (in economies that blockade women from skilled jobs or education), and resource constraints affecting the whole family (rural moms can't choose between nursing a sick baby and harvesting crops).

In addition to "free" care work like childrearing and household duties, the report found, women also do informal work linked to the “regular” economy, such as subsistence farming, so that overall: "Women’s work time exceeds that of men when all types of work are included."

And the more time that women—particularly poor and less-educated women—spend on uncompensated work, the more constrained are their opportunities for community engagement and personal enrichment, the authors write:

There is also little time for rest given that care work must be done every day. Women’s rights to an education, political participation, decent work and leisure therefore go unfulfilled.

Rachel Moussie, women’s economic rights coordinator at ActionAid, says that the report underscores the contrast between the agendas of relatively privileged feminists in wealthier communities (like those who can afford to outsource caregiving duties to underpaid domestic workers) and the struggles of poor women in the Global South.

"Up until now I think [child-care labor] has been seen very much as a Global North issue—something you can address once women are educated, once women are in jobs, and once middle class women start demanding support at home,” Moussie says. Under this view, she adds, advocates might assume that unless women have achieved a certain social status as workers in the formal sector, “there's no point in talking about care and the division of labor [in other sectors], because it's so inherently ingrained and can't change."

ActionAid is trying to change this paradigm, showing that women's labor isn't something to worry about after a certain level of development is achieved; rather, gender justice is critical to making that advancement happen in the most inclusive way. The group is campaigning for immediate and long-term structural changes around women's labor in all social sectors. While neoliberal development agendas tend to maintain or deepen gender inequities, incorporating a gender analysis into progressive development schemes could promote a fairer distribution of public resources.

In Bamburi, Kenya, for example, ActionAid reported that local women’s advocates have demanded that the government establish child care centers, which could help with family responsibilities while also boosting children’s educational access. In other cases, women reported that community education campaigns persuaded some men to take up more household chores and share childcare duties.

Activists pushing for recognition of unpaid labor aren’t demanding a paycheck for breastfeeding or fetching well water. They simply want society to reassess how it values labor and to respect women's often-hidden social contributions. One widowed Nepalese mother participating in the time-tracking project described her duties as “the type of work where we do not earn money but do not have free time either. Our work is not seen, but we are not free as well.”

Sometimes, just seeing women in a different light—as workers and citizens rather than free help—can be a step toward a more emancipated society, inside and outside the house.