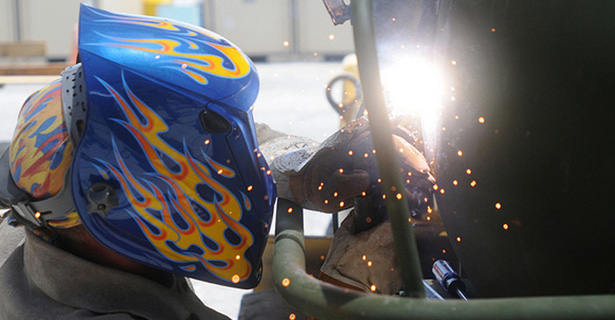 Is the workforce short on advanced skills like welding, or is the nation just short on jobs?   (Petty Officer 3rd Class Joshua Nistas / Flickr / Creative Commons).

Over the last few years, the media has blared warnings that a “skills gap” among American workers is preventing full economic recovery.

According to this narrative, the problem is not an inadequate supply of family-sustaining jobs; it’s a workforce lacking in skills, training and education. The skills gap thesis has been spread by influential pundits like the New York Times' Thomas Friedman, top CEOs like Caterpillar's Doug Oberhelman, and PIMCO hedge fund owner Bill Gross, who declared, “Our labor force is too expensive and poorly educated for today's marketplace."

In my home state of Wisconsin, the Milwaukee Journal Sentinel has repeatedly given lavish coverage to a November 2011 comment by Tim Sullivan, former CEO of Bucyrus International and special advisor to Gov. Scott Walker on workforce development: “We don’t have a jobs crisis in Milwaukee, we have an education crisis.”

But in a study released this week called “The Skills Gap and Unemployment in Wisconsin: Separating Fact From Fiction,” urbanologist Marc Levine, a professor of history and economic development at the University of Wisconsin-Milwaukee, applies a data-laden sledgehammer to this notion. And while Levine’s report focused primarily on Wisconsin, his critique of the “skills gap” notion has national implications.

Levine’s report decimates the skills gap thesis one point at a time:

Speaking with Working In These Times, Levine blasted media like the Journal Sentinel for recklessly spreading the “skills gap” myth. “They’ve relied on anecdotes and claims by CEOs that simply don’t measure up to reality,” says Levine. “There are still three unemployed people for every possible job opening.”

Adding injury to insult, the purveyors of the skills gap myth don’t just sidestep corporate responsibility for the shortage of well-paying jobs; they use the alleged deficiency in the workforce to justify shifting jobs out of Wisconsin.

In 2008, while still CEO of Bucyrus International (now part of Caterpillar), Tim Sullivan—Wisconsin's leading alarmist on the skills gap—decried a shortage of “qualified, factory-grade” welders in Milwaukee. Sullivan proceeded to move about 80 welding jobs to Kilgore, Texas.

However, Sullivan’s rationale doesn’t hold up under scrutiny. To quote the report, “Around the time Bucyrus was opening its Kilgore plant, there were 635 unemployed welders in metro Milwaukee, and 1,935 unemployed welders in Wisconsin.” The real attraction of Kilgore was likely not skills, but savings: Workers in Kilgore make lower salaries—31 percent of welders make less than $25,000, compared to only 22 percent in Milwaukee—and, very significantly, are not unionized.

“The people pushing the skills gap have an agenda that they are not talking about publicly,” Levine told Working In These Times, “and that agenda focuses on keeping wages low and having non-union workers.”

Pundits’ and CEOs’ unfiltered claims create a comforting explanation for the still-widespread unemployment long after the Great Recession has supposedly ended, says Levine.

“There’s a strong ideological component behind the skills gap trope,” Levine says. “It diverts attention (and policies) from the deep inequalities and market fundamentalism that created the unemployment crisis.”

Or, as he writes in his report: “The problem isn’t a malfunctioning ‘talent pipeline.' The problem is a sputtering job-creation machine, in both the quantity and quality of jobs created.”