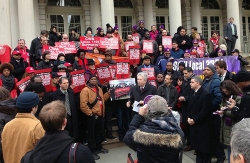 Earlier this month, Cablevision fired 22 union members who gathered outside a manager’s office in Brooklyn demanding to discuss delays in contract talks. The cable company claimed at the time that it had a right to fire the workers for their refusal to return to work, while the workers said that under the company’s “open door” policy, they had the right to speak to management.

Now, the Communications Workers of America (CWA), which represents the workers, is calling on both the National Labor Relations Board (NLRB) and the New York City Council to censure Cablevision for union-busting.

Cablevision has hired back five of the workers, according to CWA District 1 Organizing Director Tim Dabnau, but 16 workers remain without a job. Cablevision now says that the workers have not been fired, but rather “permanently replaced.” However, the CWA sees this as a technicality, and has filed charges with the NLRB calling the firings an “illegal lockout.”

In addition, CWA has filed a second set of NLRB charges against Cablevision for engaging in “bad faith bargaining,” claiming Cablevision has no intention of negotiating a contract, but is instead trying to break the union. CWA points to emails and a memo sent by Cablevision to workers explaining how to decertify a union.

Asked for comment, Cablevision sent the following statement to Working In These Times:

The CWA is engaged in a campaign to mislead public officials and damage Cablevision's reputation. This has included lying about our Internet speeds, protesting a company-sponsored cancer benefit, and placing unwarranted robo calls to Sandy storm victims. Virtually all Cablevision employees enjoy a direct and positive relationship with the company and Cablevision makes a major contribution to New York City in terms of jobs and paying tens of millions in annual franchise fees. We are negotiating in good faith with the CWA union to come to an agreement on a contract.

Not content to wait for the NLRB to rule—a process that can take months, and sometimes years—the CWA is also calling on the New York City Council to repeal Cablevision’s franchise agreement. The contract, which allows the company to provide cable in Brooklyn and the Bronx, states that “Franchisee shall recognize the right of its employees to bargain collectively through representatives of their own choosing in accordance with applicable law.”

“Following the despicable attempt to intimidate workers and franchise agreement violations, Cablevision-Optimum, its CEO James Dolan, and his other business entities—like MSG—deserve no benefits or special permits from our city,” said Chris Shelton, Vice President of CWA District 1 in a statement. “The Council is rightfully examining what are clear franchise violations by Cablevision-Optimum. We should not be rewarding unethical, abusive, and illegal behavior.”

On Tuesday, the New York City Council Oversight Committee held a preliminary hearing to look into the case. “Many of my colleagues and I have questions and concerns about Cablevision’s recent behavior and how these actions intersect with the collective bargaining provisions of their franchise agreement,” wrote New York City Council Speaker Christine Quinn in a press statement in advance of the hearing. “Private companies must obey the rules of the road as it relates to collective bargaining and labor agreements.”

The City Council is still considering whether or not to repeal Cablevision’s franchise agreement.

Note: The Communications Workers of America is a sponsor of In These Times.