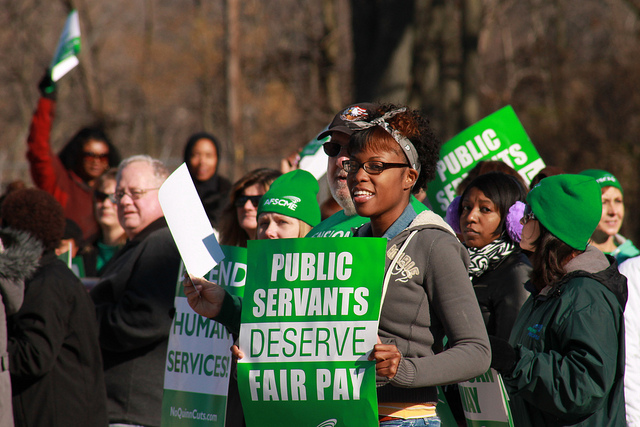 At a Nov. 14, 2012 Unity Day event, one of many statewide, Illinois public workers turned out for a show of solidarity around contract negotiations. (AFSCME Council 31/Flickr)

After serious talk of a statewide public employee strike, the American Federation of State, County and Municipal Employes (AFSCME) Council 31 issued an unexpected announcement on Thursday that it had reached a tentative deal with Illinois Gov. Pat Quinn on a new contract for about 35,000 state employees. The contract will get the green light if a majority of AFSCME members, who range from Springfield office administrators to child welfare case managers to mental health care providers, vote to approve it. The ratification process began on Monday, March 4.

Quinn and the AFSCME bargaining committee will not publicly comment on the contract's terms until AFSCME members review the deal. It is also not known why the two sides suddenly reached an agreement after 15 months of seemingly fruitless negotiations, with the feuding between AFSCME and Illinois’ Democratic governor comparable to the acrimony between the Chicago Teachers Union (CTU) and Mayor Rahm Emanuel.

Earlier last week, Anders Lindall, spokesman for AFSCME Council 31, called a strike a “very real possibility” and said that the state was in “unchartered waters” as AFSCME had never come close to a work stoppage in its 40 years bargaining with the governor’s office. Local and even national AFSCME leadership have pilloried Quinn for nearly two years. In February, AFSCME President Lee Saunders branded Quinn a “fair-weather Democrat” who “must pay” for a “relentless war on public employees.”

Asked on Thursday what had changed, Lindall limited his comments to thanking the “solidarity of our membership” and a skilled bargaining committee “that protects state employees’ standard of living—even in these most challenging of economic times.”

“This is a day not for looking back but moving forward,” Lindall says.

The governor’s office was also tight-lipped, referring back to a public statement that claims the deal is “fair to both hard-working state employees and all taxpayers of Illinois.”

The two sides were at odds over the duration of a worker wage freeze, an increase in employee health care costs, and a lawsuit filed by AFSCME over Quinn not paying raises that the union says were contractually promised in the last agreement. The Springfield newsletter Capitol Fax reports that the battle over these raises, raging since Quinn scotched the pay hikes in June 2011, has been solved as part of the tentative agreement. Neither Quinn’s office nor AFSMCE would confirm the Capitol Fax report.

These specific issues were part of a broader dispute about the very role of Illinois’ main public employees union. AFSCME represents 82 percent of state government workers.

In the past Quinn claimed AFSCME members could not receive their pay raises because the Illinois General Assembly did not appropriate the money. He also often noted that Illinois is billions of dollars in debt and called for AFSCME members to make more sacrifices.

AFSCME countered that Quinn had deceived them about the pay raises and had not been on the level since the union mobilized members and money behind Quinn’s razor thin 2010 gubernatorial election victory. “He made a deal with them before the last election and then reneged on the negotiated raises,” says Christopher Mooney, a political science professor at the University of Illinois-Springfield. “The union feels betrayed.”

Such feelings spilled over into an ultimately unsuccessful lawsuit filed by AFSCME last August to prevent Quinn from closing state prisons and juvenile justice centers. And suspicion from AFSCME and other statewide unions are an animating force in Quinn’s stalled efforts to revamp the state’s public-employee pension systems. Quinn says that so-called pension reform is the defining issue of his governorship. He has called on AFSCME members to either lose their retiree health care or a sizable part of their annual benefit in order to whittle down $96 billion in unfunded pension obligations.

Like CTU with Emanuel, or Wisconsin public employees with Gov. Scott Walker, AFSCME has viewed Quinn's calls for fiscal austerity as part of a political agenda to weaken public-sector unions.

Robert Bruno, director of the labor studies program at the University of Illinois at Chicago, says that AFSCME mostly has it right—the distinctions between Illinois and, for example, Wisconsin, are “superficial” and “threadbare.” Bruno argues that, “In Indiana, Wisconsin, Michigan, and now in Illinois, state and local government unionized workers are ideologically characterized as impediments to fiscal stability.”

But Mooney believes that the dispute has been less ideological and that Quinn is an “old school liberal” who is often in over his head. Indeed, Quinn inherited an objectively lousy situation from the now imprisoned Rod Blagojevich and has spent four years taking flak from all sides of the political aisle. A Paul Simon Public Policy institute poll released two weeks ago put the governor’s statewide approval rating at 33 percent.

Perhaps, though, Quinn’s ability to do with AFSCME what Emanuel could not do with CTU and avoid a massive public employee strike will embolden the governor. More importantly, it could signal a more constructive relationship between AFSCME and the governor’s office where the bargaining rights and political ideas of public sector labor are part of Quinn’s agenda going forward.

AFSCME is a sponsor of In These Times.