Will Chicago Save Money From School Closings? The Evidence Is Thin 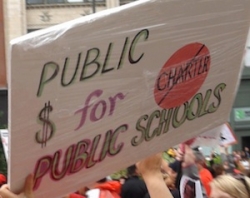 On September 13, 2012, at a rally downtown to support the Chicago Teachers Union strike, signs decry the closing of public schools in favor of charter schools, one of the major issues in the strike.   (FireDogLake/Flickr/Creative Commons)

Chicago Mayor Rahm Emanuel and his handpicked team of Chicago Public Schools administrators are intent on closing perhaps dozens of schools, claiming an urgent need to better utilize the district’s limited finances. By the end of this month, CPS will submit to the Board of Education a list of schools to be shut down for the 2013-14 school year.

Remarkably, both the CTU and city officials are making their respective cases about the school closures by citing the same study: a 21-page report from Pew Charitable Trusts released in October 2011. A CPS communications official acknowledges that this report has guided the school shutdown budget process, including an estimate that the district can save between $500,000 and $800,000 per closing. Meanwhile, CTU researcher Sarah Hainds says, “The Pew Charitable Trust study is pretty much what everyone uses.”

Pew did not focus exclusively on Chicago, providing a six-city analysis with special attention paid to Philadelphia's school closing history. Regardless, the report concluded that the cost savings was “relatively small."

Indeed, if CPS is able to maximize the savings and squeeze $800,000 from each building closed, the district would save $20 million from closing 25 schools. That amounts to 2 percent of CPS’s estimated $1 billion budget deficit for the next fiscal year.

The same Pew study additionally found that getting a buyer for school buildings is almost impossible, and that these buildings can be both expensive to maintain and, if left abandoned, contribute to community blight. The study also states that there is no evidence that school closings either significantly help or hurt the academic performance of affected students—the same conclusion of a report last year from the University of Chicago Consortium on Chicago School Research.

School closings, then, might not be worth the trouble. The savings are small, the drawbacks—such as forcing students to cross gang lines to attend school—are potentially scary, and, according to Pew, the “political fallout is significant.” The Pew study’s authors, in fact, singled out Chicago for closings that have sparked community outrage since 2004.

CPS counters that utilization is not only about saving money, but pooling resources in a way that might provide better student-to-teacher ratios. But the idea of more efficient resource sharing, explored in a recent WBEZ/Chicago Public Radio story, is a conspicuously new rationale for the old policy of closing schools. In fact, last year, then-CPS head Jean-Claude Brizard portrayed the closings in almost the opposite way, saying they were needed to get children out of under-performing schools.

“Part of past mistakes is this district has been focused too much on efficiency,” Brizard told the Chicago Tribune in December 2011, following the announcement of seven proposed school shut downs. “Our focus has been about improving the lot for kids around performance, not necessarily about saving dollars.”

Between 2000 and 2010, before Emanuel's tenure as mayor, CPS closed 44 schools but added a net of 84 schools, giving the district a total of 681 schools. That 12 percent increase has perhaps contributed more to the so-called utilization crisis than student population decline. The CPS student population dropped from 432,000 in 2000 to 403,000 in 2010, a 7 percent decline.

“It is a marketing gimmick,” Hainds says of utilization. “They are thinking ‘What is the excuse that we can use that has the least pushback?’”

Brown and CTU are also concerned with how many schools CPS will actually shut down. In the midst of September’s strike, the Chicago Tribune reported that 80-120 schools were looked at being closed. Last month, CPS Chief Executive Officer Barbara Byrd-Bennett announced that 129 schools were “eligible” for closure. Hainds believes the district will shut down between 50 to 60 schools over the next couple of years.

Emanuel and school officials have promised that once the proposed closings are announced, they will ramp up community outreach efforts. It bears watching if CPS can better explain then how shutdowns will save money and improve a troubled school district.