Day Laborers Defend Their Right to Public Space in Court 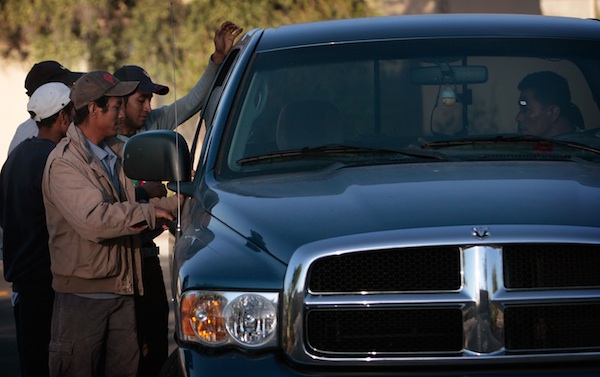 Looking to hire someone for a little landscaping work or a construction job? There might be a local agency that can offer free security services to ensure that workers will work as hard as possible for as little as you’re willing to pay: the local police department.

Across the country, the undocumented day laborers who build, paint and pave many communities are locked into a low-wage regime that is de facto enforced by state power, which can threaten to round them up just for trying to work--in the name of protecting "public safety."

Arizona was once a model for this form of anti-worker bullying. But a federal court has just struck down one of the harshest provisions of the infamous anti-immigrant law known as SB 1070, which enabled police to arrest people for soliciting work in public.

The law, enacted in 2010, targeted workers who could be characterized as obstructing traffic as they seek work. The underlying logic was that such restrictions make immigrants’ lives so unbearable they will ultimately “self deport” (a notion that ignores the myriad social factors and family commitments that compel migrants to stay at all costs).

A product of Arizona’s ferocious xenophobia and an inspiration for other states’ anti-immigrant policies, SB 1070 is best known for its “papers, please” provisions, which explicitly encouraged police to profile Latinos suspected of being undocumented. (Last year the Supreme Court upheld that provision while striking down others in the law as overly broad.) But in some ways the more obscure provisions on day laborers are more nefarious because they directly attack workers’ rights to pursue a livelihood.

So following a challenge led by civil rights groups, a Phoenix federal district court called the law what it was: not a traffic safety measure but a backhanded assault on constitutional rights.

Upholding the lower court ruling against the provision based on free-speech grounds, a three-judge appeals court panel wrote that “an injunction is in the public interest because the day labor provisions, if enforced, would infringe the First Amendment rights of many persons who are not parties to this lawsuit.”

The decision gives day laborers some peace of mind in knowing that at least their right to seek work is protected. Salvador Reza, a coordinator of a day labor center in Phoenix (who himself has had a few run-ins with the law due to his pro-migrant activism), tells Working In These Times, "[In] being sure that they can be on the corner or on the sidewalk or in a public space and basically waving down cars or whatever, I think that will give them more security, that they can actually do that without being harassed."

The ruling explains that Arizona had not really been carrying out a legitimate interest in ensuring traffic safety, but rather “has failed to justify a need to serve that interest through targeting and penalizing day labor solicitation that blocks traffic, rather than directly targeting those who create traffic hazards without reference to their speech, as currently proscribed under the State’s preexisting traffic laws.” In other words, this obscure provision undermined workers’ fundamental right to participate in the labor market by restricting “commercial speech.”

While this law could be interpreted as a way to keep workers from engaging in risky underground jobs, such heavy-handed enforcement strategies tend to have the perverse effect of driving people toward even more marginal, unsafe work. Fear of confronting police deters them from asserting their labor rights or challenging unscrupulous bosses. More generally, such laws keep day laborers physically and socially marginalized under a racist law enforcement regime designed to facilitate mass deportations.

Still, even though the court has blocked this component of SB 1070, day laborers remain extremely vulnerable to the worst forms of labor abuse. Reza notes that workers at his center still struggle for fair treatment, especially since work has dried up as of late in their trades like construction, and that many are unaware about their constitutional protections against police harassment, even without papers. His organization, he says, will continue doing outreach in the streets “to educate them as to their rights, so that they know exactly what they can do and not do.”

The case also shows how all workers, and community members, benefit when a baseline of rights and security is upheld for laborers at the bottom of the economy, by pushing back against policies that eviscerate constitutional liberties in the name of public security. Public nuisance and anti-loitering laws have long been used to marginalize the poor and limit their access to the public square. Often these laws segregate specific communities, from black youth to environmental activists, allowing the state to criminalize and surveill public behavior that basically threatens nothing except the political establishment.

In addition to the dictatorial approach to traffic management embodied in policies like SB1070, authorities in New York, Chicago and other cities have tried to impose anti-loitering rules to curtail street vendors, many of whom are struggling immigrants, from plying their trade.

To Raúl Alcaraz Ochoa, education coordinator at Tucson's Southside Day Labor Center, the court ruling deepens the public debate on laws like SB 1070, showing that it is as entwined with labor struggles as it is with racial profiling. "Labor is usually something that is left in the shadows," Ochoa says. "The ruling, I believe, can help shine light on how capitalism’s profit and exploitation are central to the national immigration debate."

Undocumented workers on the street find themselves at the vanguard of a defense of the nation’s founding document. With a long march ahead to achieve economic justice, on this battlefront, they’ve stood their ground.