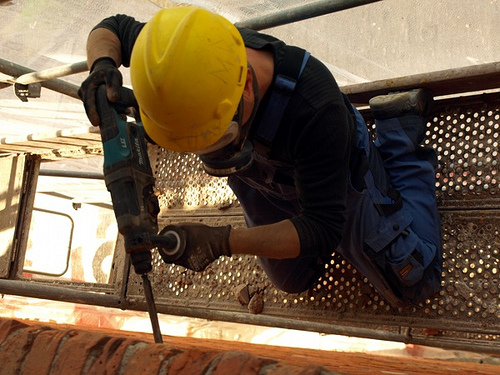 President Obama called for a modest raise in the federal minimum wage to $9 in his State of the Union Address, and several Democratic legislators have upped his bid with a proposed increase to $10.10.

But an insidious effort to lower the wage floor is already underway much closer to the ground—in the state legislatures where right-wing lobbyists have been greasing the skids for years for an onslaught of anti-worker policies.

An extensive analysis recently published by labor advocacy organization the National Employment Law Project tracks more than 100 bills introduced in 31 states since January 2011 that “aim to repeal or weaken core wage standards at the state or local level." Each bears the fingerprint of notorious super-lobbying organization the American Legislative Exchange Council (ALEC), which acts as a forum for “private sector leaders” to advise public officials. Most of the anti-worker bills were proposed by lawmakers directly linked to ALEC and include language that echoes that of "model legislation" developed by ALEC. Among the proposals are measures to undercut minimum wages for teenage workers, restrict overtime pay and repeal or ban local laws to improve working conditions.

ALEC has been called out by activists for pushing legislation that advances a classic right-wing agenda, from school privatization to rolling back healthcare reform. But the “wage suppression” tactics are a particularly callous attempt by ALEC-affiliated legislators to feed corporate profits by starving workers.

The wage-suppression laws are the latest strike in a war of attrition waged by ALEC and “private sector leaders” (as the organization calls them) against labor and workplace rights, aimed at forcing low-wage workers into even deeper economic insecurity.

While efforts to pass pro-worker policies in Washington have met with resistance, ALEC-sponsored bills seek to outlaw protections for workers at the state and local level, such as living wage ordinances and paid leave mandates. In several states, including Arizona, Connecticut, Maryland and Michigan, lawmakers have introduced ALEC-associated legislation to preempt prevailing wage laws, which ensure workers receive relatively fair wages in government-contracted work, including the public infrastructure projects that fuel local construction sectors.

NELP points out that only a minority of these bills have actually been enacted, but the sheer volume of anti-worker legislative proposals is nonetheless alarming at a time when the labor movement, which has traditionally struggled to beat back pro-corporate legislation, is weaker than ever.

The ALEC-inspired bills to weaken state minimum wage laws strike directly at state’s efforts to lift workers above the absurdly low federal minimum of $7.25 an hour. Some states have set base wages significantly higher than the federal minimum—like Vermont's minimum hourly wage of $8.60, adjusted automatically to keep pace with the cost of living.

Losing the state minimum wage could leave some workers completely unprotected, because they are excluded from the federal Fair Labor Standards Act (FLSA). Home health aides, for example, have long been exempted from federal minimum-wage rules, despite strong grassroots campaigns to include them, but are covered by minimum wage law in some states, including New York and Massachussetts. Their incredibly low wages—typically less than $10 an hour across the industry—could be bumped down further if state wage floors are ripped from under them.
Overtime pay is another labor issue on which states have filled gaps in federal law. While the FLSA guarantees time-and-a-half overtime pay for many sectors, some low-wage workers, including certain federally-exempted domestic service jobs, are entitled to that wage boost only under state law. Legislators in some states—including the “right to work” battlegrounds of Ohio and Michigan, where unions are under siege—have tried to allow certain employers to get around overtime by instead paying workers “comp time,” or time off equal to one regular hour of work, even if they work more than 40 hours a week. One ALEC-affiliated bill proposed in 2011 in Nevada explicitly sought to exclude home care workers from overtime laws.

Noting that conservatives will hold majority control of most state houses this year, NELP analyst Jack Temple says, “Since legislation to raise the federal minimum wage usually depends on momentum from the states, bills like these that weaken or repeal wage standards at the state level serve to undercut the momentum needed to pass national legislation in Congress.”

The measures to prevent local officials from raising the bar for workers betrays ALEC’s underlying agenda. Though the organization purports to champion the “rights” of local authorities to act independently of “big government,” NELP reports, it’s really more about emancipating big business from regulation:

Despite ALEC’s putative support for limited government and local sovereignty, living wage preemption proposals would establish state-wide mandates that severely restrict the freedom that city governments have to set standards for businesses that receive public support.

According to Temple, with so many wage-suppression bills clogging state legislatures, even if many do not pass:

The significance of these bills for advocates at the state level concerns the sheer amount of energy and time that must be spent fighting back bills like these, which drains the time and resources that could otherwise be dedicated to improving wage standards rather than just protecting the laws already on the books.

A bill creeping through the Florida legislature seems poised to undercut emerging efforts to improve workers’ lives. HB 655 would ban towns and cities from taking local initiatives to raise wages and give workers paid leave time, thus blocking key policies that could improve the lives of workers surviving on the state’s threadbare minimum wage of $7.79 (about a third of what a single parent of two would need to earn a decent living). On the heels of a recent campaign, led by local labor groups, to establish paid sick days in Miami-Dade County, the bill would effectively block local officials from granting workers the basic protection of not having to lose wages for calling in sick.

Florida is just one battleground in a nationwide movement to improve protections and wage standards for the working poor, as labor advocates push for raises in state and federal minimum wages in tandem with the White House's proposal. But NELP's report reveals how groups like ALEC have already gotten a head start in our state legislatures.

Without strong unions or even an adequate social safety net, minimum wage laws are the last line of defense between low-wage workers and abject poverty. So it makes sense that ALEC is now driving to pull the floor from under them; they might as well kick them when they’re down.