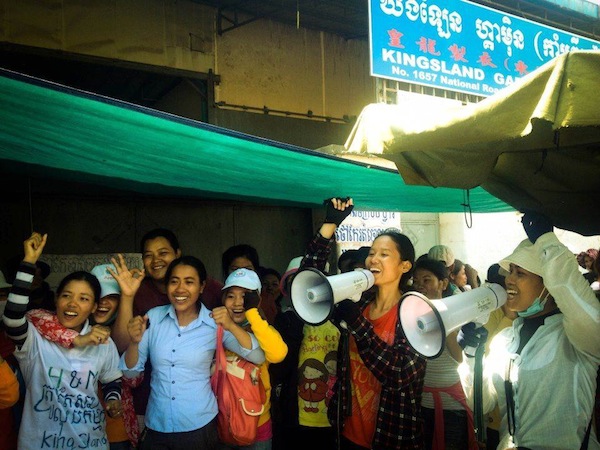 Cambodian garment workers celebrate winning a settlement of as much as $200,000. (Photo from Community Legal Education Center)

After workers across the U.S. staged mini-strikes at Wal-Marts this winter, a small crowd of Cambodian garment workers caused a stir by camping in front of a shuttered Wal-Mart supplier in Phnom Penh. The workers were protesting a sudden closure of the Kingsland apparel factory, which robbed them of both their jobs and tens of thousands in wages. They staged creative direct actions, including attempts to physically block the removal of sewing equipment.

Now, the Cambodians' efforts to hold their former bosses accountable have paid off--in both money and political impact. Some two hundred Kingsland workers who produced clothing for H&M and Wal-Mart-affiliated brands for about $60 a month have won a settlement of an estimated $200,000.

The workers won the surprise victory against the global manufacturing Goliaths thanks in large part to savvy support from Cambodian and international labor groups. These allies helped spread the word globally by broadcasting the protestors' video testimonials and marching to present a letter to Rajan Kamalanathan, Walmart’s Vice President of Ethical Sourcing.

The $200,000 settlement is a pittance compared to the industry’s billions in annual profits. But the deal could be a breakthrough for the emergent labor movement in South and Southeast Asia, showing that although firms viciously resist even the smallest demands for fair treatment by workers at the bottom of the supply chain, those workers can fight back with legal and grassroots pressure.

Although the race to the bottom in labor standards has hurt garment workers around the world, many in the U.S. accepted the line that Cambodian (or Chinese or Bengali) workers were taking “our” jobs. Cross-border solidarity in the Wal-Mart supply chain offers a seed of hope that this perception can change.

“We’re thankful to the Wal-Mart warehouse workers,” said Poung Phirum, 23. “The Americans who are supporting us work for Wal-Mart, just like us.”

Though workers had clearly been filling orders from the Wal-Mart and H&M-affiliated firms in the months preceding the sudden shutdown, brand representatives claimed business with the factory had ceased and all orders had been “paid in full.” Those statements reflect a longstanding pattern of U.S. multinationals skirting responsibility for labor violations at the far end of the manufacturing chain--the same practice that allowed Wal-Mart plausible deniability when it distanced itself from the horrific Tazreen factory fire in Bangladesh last November.

But this time, workers put up enough of a fight to persuade suppliers that simply paying workers what they were owed was easier than continuing to suffer the public relations headache.

David Welsh, country director for the AFL-CIO-affiliated Solidarity Center in Cambodia, tells In These Times that although Cambodia is heavily dependent on the garment industry and ranks as the eighth-largest apparel producer for U.S. markets, the workers in this case were able to go through the legal system and leverage government support to receive a fair settlement. The successful negotiations might open the door to establishing fairer processes for labor settlements, so workers are better protected from industrial turmoil in the future.

In the end, through bankruptcy negotiations overseen by a Cambodian court, advocates worked out a deal with support from a government ministerial committee to grant workers a fair share of the assets that were liquidated. Although in many cases the bankruptcy process is not transparent and tends to leave workers shortchanged, Welsh said, in this case at least, they were able to press the Wal-Mart and H&M-linked suppliers--Saramax Apparel Group and New Archid Garment Factory--to cough up for the settlement, which is still being finalized, but is expected to be roughly $200,000.

The future is uncertain for Cambodia’s garment sector as a whole. Kingsland was an increasingly rare holdover from an earlier time when workers could stay at a job for years on long-term contracts and had some protection against arbitrary firing. The garment sector has shifted in recent years to shorter-term contracts, and thus even less security for workers in the frenetic world of “fast fashion” manufacturing. In a commercial fashion market based on rapid mass-production to keep clothes up to date with ephemeral trends, workers are under crippling pressure to produce more for less pay.

The Kingsland workers’ small victory in holding the line against unfair job losses could serve as an example for manufacturing workers across the region, who are being squeezed by growing job insecurity and continuing pressure on factories to suppress labor costs. Welsh says that labor advocates hope the settlement will help lay the foundation for more systemic changes in the garment sector to address the factory closures and mass layoffs that roil throughout the volatile global fashion industry.

Some activists see insurance systems as an avenue to empower workers in the wake of sudden shutdowns. Welsh says multinationals should work with the industry to “create an insurance scheme where if you want to operate as a [garment manufacturer] or exporting factory you have to make sure that the capitalization or the insurance rate is such ... that there's always enough available money to cover those claims for workers, so that you don't have to go through this torturous international campaign factory by factory by factory."

Since these payouts end up being tiny compared to the companies’ overall bottom line, he says, ‘"The brands cannot say with a straight face, 'We simply cannot afford to do this.' "

At the Kingsland factory, the workers who camped out on the streets just to get their wages exposed the absurdity of a global fashion industry that reaps huge revenues, yet insists on nickel-and-diming its poorest workers. This time, the bosses were finally forced to clean up some of the mess left in the wake of global profit streams.