How the Poultry Industry is Grinding Up Workers’ Health and Rights 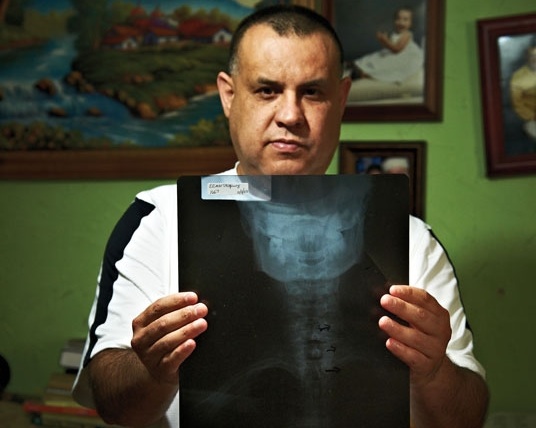 Juan (not his real name) was instructed to get back to work after falling while lifting an 80-pound box of chicken. X-rays later showed two fractured vertebrae. He was fired, and the employer has not paid any of his medical bills.   (Courtesy of SPLC)

Walk through any supermarket poultry section and you can marvel at the wonders of the modern food processing industry: antiseptic aisles packed with gleaming, plump shrink-wrapped chickens, sold at bargain prices under the labels of trusted agribusiness brands like Tyson and Pilgrim’s. But all that quality meat doesn’t come cheap: it’s paid for dearly by factory workers who brave injury, abuse and coercion every day on assembly lines running at increasingly deadly speeds.

According to newly published research on Alabama poultry workers by the civil rights group Southern Poverty Law Center (SPLC), the business model of the sector has sacrificed health and safety on the factory floor for the Tayloristic efficiency demanded by American appetites.

The supersized industry, which churns out about 50 pounds of chicken per American stomach annually, dominates many struggling towns in Alabama, a mostly non-union state, supporting about 10 percent of the local economy and some 75,000 jobs. But according to the SPLC’s researchers, the production line is butchering workers' health:

Nearly three-quarters of the poultry workers interviewed for this report described suffering some type of significant work-related injury or illness. In spite of many factors that lead to undercounting of injuries in poultry plants, the U.S. Occupational Safety and Health Administration (OSHA) reported an injury rate of 5.9 percent for poultry processing workers in 2010, a rate that is more than 50 percent higher than the 3.8 percent injury rate for all U.S. workers.

Alabama workers interviewed by the SPLC reported being routinely subjected to unsafe working conditions that led to severe health threats, from repetitive stress injuries to respiratory issues to chemical burns. Adding insult to injury, employers often ignored workers’ debilitating problems or punished them for asserting their rights. Evoking images reminiscent of Upton Sinclair’s century-old expose on the meat-packing industry The Jungle, workers reported that problems like crippling hand pain would be diverted to the company nurse, rather than more intensive care by an outside doctor. Others were fired before they could become more of a liability.

One worker, a black woman in her 30s, recounted in an interview being pressured to shield her company from responsibility for her injury:

“I shouldn’t say it’s work-related. If I say my pain comes from something I did at work, then I will be laid off without pay and three days later get fired. So, when I go to the nurse I tell her that I hurt my hands at home.”

In towns that lack decent job opportunities outside of the poultry industry, these workers face an oppressive workplace culture that undermines not only their health but their dignity. Workers reported “being discouraged from reporting work-related injuries, enduring constant pain and even choosing to urinate on themselves rather than invite the wrath of a supervisor by leaving the processing line for a restroom break.”

Conditions may soon worsen, the SPLC notes, because the Department of Agriculture is seeking to alter regulations to allow even faster line speeds. That means the already frenzied pace of production--whipping bird carcasses into hermetically sealed flesh pellets in a matter of seconds--might speed up even more under a controversial set of proposed changes to plant inspection protocols.

The planned reforms have been criticized as counterproductive because they transfer control of inspections from federal inspectors to company employees. The revamped inspection process would, according to critics, both give corporations more power to regulate their own henhouse while accelerating the already frighteningly hectic pace of production. Some USDA inspectors have criticized the proposal, warning that with the combination of sped-up lines and company-controlled oversight, these industry-backed efforts to “modernize” the production chain may create more safety risks. So safety standards for both consumers and workers might be further weakened. (Industry representatives dispute the SPLC's research, insisting that the proposal would not harm safety standards.)

Underlying labor injustices have exacerbated the immediate workplace hazards. The mostly black and Latino workforce, which includes many documented and undocumented immigrants, generally have little recourse against abusive employers. Many saw their pay arbitrarily cut by deductions for housing expenses and other fees. Meanwhile, for female workers, sexual harassment was a commonly reported issue. Harsh immigration enforcement laws, which were recently tightened by state legislation that seeks to further criminalize undocumented Latino workers, has made them even more economically insecure and socially marginalized.

One structural problem making poultry workers especially vulnerable, the researchers argue, is that despite some general occupational safety guidelines for poultry plants, OSHA “has no set of mandatory guidelines tailored to protect poultry processing workers,” which constrains workers' ability to take legal action against unsafe working conditions or unfair treatment.

The report's author, SPLC advocate Tom Fritzsche, says that while OSHA can enforce general workplace protections, regulatory gaps nonetheless enable the industry to structure its labor system around loophole-ridden standards for food production, which are not focused on worker safety. "This specific [line speed] rule from USDA is not really intended originally as a worker protection standard... The speed that they currently run at is based more on whether the inspectors can see the chickens, rather than how the workers can do the work safely," he says. As a result of these regulatory lapses, "We've kind of ended up in a world where this is the only limit on speeds."

Until state and federal regulators start prioritizing workers' labor rights and health needs, the unsafe work environment, Fritzsche adds, “ultimately comes from the fact that the whole industry is just operating in this kind of race to produce as many chickens as they can in as little amount of time as they can. And so it affects every aspect of the worker's job.”

But all those bitter hardships are stowed far away from the millions of super-clean, ultra-cheap drumsticks that will end up on American dinner tables tonight. Countless consumers will enjoy their meals without any conception of how perfectly the poultry industry masks the true price of its brutal efficiency.