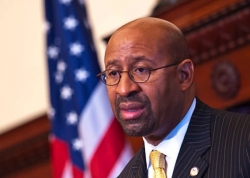 Last week, the Philadelphia City Council passed a bill that would require nearly all employers in Philadelphia to provide paid sick days for their workers. (The only exemptions were “mom and pop” companies with less than 6 employees.) The bill now awaits Philadelphia Mayor Michael Nutter’s signature. Many expect the mayor to veto the bill, as he did a similar bill in 2011.
If passed, the bill would make Philadelphia the fifth major U.S. city to mandate paid sick days, following Portland, which passed just such a bill last week. As Nutter decides whether to veto the bill, an unusual player has emerged to oppose it: Comcast.

The cable company is a major presence in Philadelphia, occupying the 58-story Comcast Center, which was financed largely by an annual 95 percent tax break that Comcast still enjoys for constructing the city's tallest building. With more than 6,000 employees in Philadelphia, Comcast is a major local political player. And despite the fact its own employees receive paid sick days, Comcast spent $108,400 in 2012 to lobby against the bill, according to filings with the city's Board of Ethics. The decision has left many Philadelphia political observers scratching their heads.

“I think they are kinda carrying the ball for the business community because Comcast is a respected company in this city," says City Councilman Bill Greenlee, the lead sponsor of the bill. "That’s just my guess, nobody has said that to me. I think what their real argument is, 'We don’t want you to tell us what to do. We don't want to be mandated.' ”

Comcast says they oppose the bill because it would be too heavy of a financial burden.

“Comcast employs more than 6,000 full- and part-time employees in the City of Philadelphia and provides our employees with a generous compensation package that, among other benefits, includes substantial paid-time off opportunities that meet and, in most cases, exceed the requirements set forth in this bill,” Comcast spokesman Jeff Alexander wrote in a press statement. “So while we fully support paid sick leave for our employees—and provide it—Comcast, like many other local companies, opposes this bill.  It would create unnecessary administrative burden and would disrupt a uniform benefits package that is best in class and that our employees have embraced in its current form.”

However, union activists who have been attempting to organize workers at Comcast say that while the company does offer paid sick leave, in reality workers often have a very tough time using it.

“[Comcast's opposition] doesn't surprise me. You would think that Comcast workers, given [the company's] profits, would be treated much better than they actually are but they are not,” says Steve Smith, an organizer with the International Brotherhood of Electrical Workers (IBEW). “They all have a few paid sick days. The problem with the paid sick days is that they are penalized when they take any. They have metrics at work. One of the metrics is being there at work. They will look at how many days you were absent and use it against you. You have them but are penalized for using them.”

Greenlee, though, doesn't think his bill would affect Comcast's current paid leave policies, saying, “It’s a complaint-driven bill. As I explained to [Comcast], I think the likelihood they will get any complaints is very low.”

However, Smith says that the very precedent of the city government using its legal power to regulate how an employer can parcel out unpaid sick days has led Comcast to oppose the bill.

“They are hoping that no precedent gets set about these paid sick days,” says Smith.

Mayor Nutter has until April 4 to veto the bill, which many, including Greenlee, expect him to do. However, some activists still hope Nutter will side with workers over Comcast.

“Big media companies like this really limit the voices of poor and working people in the media,” says Hannah Sassaman, a member of the Media Mobilizing Project based in Philadelphia. “Comcast shouldn’t have the right to deny people their voice in having the dignity of a paid day off.”