How ‘This American Life’ Got Disability Wrong 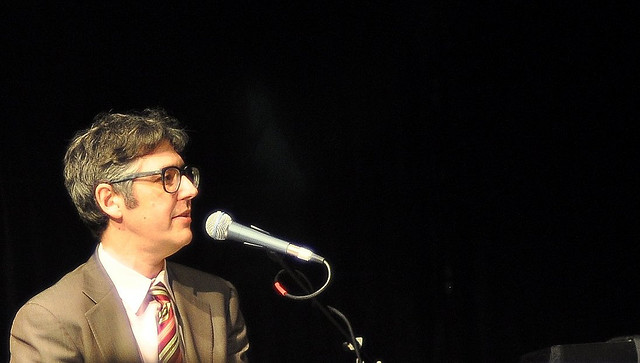 Ira Glass, host and producer of This American Life, defends this week's episode, "Unfit for Work: The startling rise of disability in America," despite a storm of criticism from media watchdogs that it provides misleading information about disability insurance.   (Ricky Montalvo/Flickr)

A dramatic investigation aired this week by This American Life raised concerns about federal disability insurance with its portrayal of the system as dysfunctional, financially unsustainable and ballooning out of control.

But experts say the program omitted key evidence that the doubling of workers on disability insurance since 1995 has been driven by genuine need.

In the show, featured on National Public Radio, This American Life reporter Chana Joffe-Walt explores a poor Alabama town where 1 in 4 people live on disability insurance. The interviews with working-class beneficiaries depict them as victims of a culture of dependency, convinced that there's no real job they could do, and prey to vulture-like lawyers. One attorney, who helps people appeal disability insurance rejections, boasts, “I've created some of the problems for the government because so many people appeal." Joffe-Walt raises hand-wringing questions, “Who is making the case for the other side? Who is defending the government's decision to deny disability?”
In fact, the government has staunch defenders of its right to deny disability benefits: pro-market conservative commentators. They argue that while other federal assistance programs have severely tightened since the neoliberal "welfare reform" of the 1990s, disability (which was expanded after its 1956 enactment to include more age groups) has become a de facto welfare system plagued with “misaligned incentives” that could lead to insolvency. Some conservatives use this narrative to make the case for privatizing disability insurance, in tandem with the push to privatize Social Security.
But according to the Washington, D.C.-based think tank Center on Budget and Policy Priorities (CBPP), the driver of growth in disability beneficiaries isn’t "misaligned incentives" or, as the show suggests, people taking advantage of an over-generous system. It’s simply more people.

Several demographic factors have drawn more people to seek disability insurance (DI) in recent years. One is a spike in aging baby boomers, who are more likely to qualify as they get older and suffer health problems. Another is more women entering the paid workforce, which has expanded the pool of workers eligible for DI later in life. A policy change has also played a role: Over the past decade, the eligibility age for Social Security retirement benefits has risen from 65 to 66, delaying older workers who receive DI benefits from transitioning to Social Security.

While some structural issues have weakened the system’s long-term funding, it is not facing a crisis that requires drastically limiting benefits, according to CBPP. The policy institute calculates that several basic financial reforms, like revamping the tax code, can maintain solvency down the line.

Testifying at a House hearing on disability insurance last week, CBPP researcher Kathy Ruffing explained: “Costs and caseloads are generally in step with past projections." She tells Working in These Times that the NPR story presents misleading comparisons with a baseline of data from the early 1980s, when the Reagan administration sharply rolled back the program.

The real story is that disability does pretty much what it’s supposed to. Established during the growth era of the late 1950s as a stopgap for people forced out of work by long-term impairments, the program issues meager monthly benefits to workers and their families through the Social Security Administration, averaging $1,100. Some heavily disadvantaged people with disabilities receive additional Supplemental Security Income payments. The roughly 9 million worker beneficiaries tend to skew older — their average age is 53 — and are disproportionately African-American, reflecting underlying racial health disparities.

Far from lavishing taxpayer money on undeserving opportunists, the DI system runs a formidable screening process. Beneficiaries must have accrued a certain number of past work-years. They must then demonstrate severe inability to support themselves with their own labor. And those who qualify need to show, with official documentation, that their disability has lasted many months (to keep out those with only temporary health issues). After all that, reports the CBPP: “Ultimately, of about 1,000 initial applications, about 410 are awarded benefits—more than one-third of them on appeal.”

"There is little evidence that DI benefits are going to people who could support themselves by working," Ruffing concludes.

For all its alarmism, the NPR report does reflect one truly dysfunctional aspect of the system—not legal loopholes, but an economy that shuts out millions of poor workers because they are too old, too sick, or otherwise “obsolete.”

As Ruffing testified to Congress:

The accelerating pace of globalization and technological change has been particularly unforgiving to older, less-educated workers and those with cognitive impairments. Whereas in the past such workers — even if they had serious health problems — might have been able to find jobs, the combination of poor health and poor labor market prospects has probably tipped many onto the disability rolls.

To progressive analysts and the disability advocacy community, it's this trend, not the alleged runaway growth of disability, that truly destabilizes the system by impoverishing families that not long ago, might have lived decently on, say, a blue-collar manufacturing job. Today, they’re more likely to meet the complex central criterion to qualify for disability: demonstrated inability to earn a living based on one's background and labor market prospects. As CBPP explains, the applicant must prove to be: “unable—considering his age, education, and work experience—to do any other kind of work that exists in the national economy, regardless of whether that work exists in his geographic area or whether he would be hired if he applied.”

Conservatives might argue that this reveals flaws in the program's rules, but in reality, the system is structured to target benefits toward people with serious impairments in the context of their social circumstances. “There are very solid reasons for viewing age and education as important factors in whether somebody is disabled,” Ruffing explains. For example, “If a surgeon loses the use of his hands,” he can switch to an alternative medical specialty, like radiology. But “if a machinist, who doesn't even have a high-school degree and who is 58 yrs old, loses the use of his hands, that is not realistic."

So in general, those with more disadvantaged backgrounds—the laid-off auto worker with a heart condition in a depressed Rust Belt town—are rightly more entitled to benefits.

As long as gaps in class and social mobility persist, then disability insurance helps blunt the sharpest edges of vicious economic inequities. While the NPR piece attempts to put the growth in disability insurance in context, its perspective is marred by ideological blinders representing a particular set of “misaligned incentives”: not those of the people suffering from hardships outside their control, but those of an economy pursuing boundless profit at the expense of the most vulnerable workers and their families.