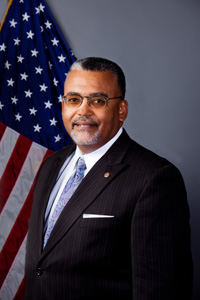 NLRB Chair Mark Pearce was renominated yesterday by President Obama in an attempt to get the broken labor board back into gear.   (NLRB)

President Barack Obama said Tuesday that he would nominate three members to the National Labor Relations Board (NLRB) in a move to restore the beleaguered agency to normal working order. The announcement comes as the board is being hammered by political and legal attacks that have severely damaged its ability to function.

The president's proposal would reappoint current NLRB Chair Mark Gaston Pearce and add two new members. If approved by the U.S. Senate, the nominations would restore the board to its full complement of five members, with three (including Pearce) representing the Democratic Party and two representing the Republican Party.

The two Republican representatives are the other nominations announced by the White House on Tuesday. The candidates are Philip Miscimarra and Harry I. Johnson III, both experienced lawyers at large firms known for representing employers in the their legal struggles against unions and workers. Miscimarra is a Chicago-based partner at Morgan, Lewis & Bockius, and Johnson is a Los Angeles-based partner at Arent Fox (and a former partner at Jones Day).

The nominations do little to allay the NLRB’s most immediate problem—a federal appeals court ruling early this year that invalidated the recess appointments of the NLRB’s other two Democratic members, Sharon Block and Richard F. Griffin, Jr. That ruling is prompting many employers to challenge the NLRB’s authority to enforce its orders and casting a legal cloud over the continued operations of the agency. The case will be appealed to the U.S. Supreme Court, according to NLRB spokeswoman Nancy Cleeland, but there is no certainty on whether the Supreme Court will be willing to hear the case or what the outcome will be. In the interim, she says, the board is taking the position that the recess appointments are proper and is making good faith efforts to carry out its mandate to enforce labor law.

The legal fight over recess appointments reflects the broader partisan battle over the NLRB, which has been the subject of constant attacks from the U.S. Chamber of Commerce and its Republican supporters since Obama took office in 2009. The attacks resumed within minutes of Tuesday’s nominations announcement, when Rep. John Kline (R-Minn.), Chairman of the House Education & Workforce Committee, issued a blistering statement: “While we welcome the president’s long-overdue effort to resolve the crisis he created, today’s announcement does not abate the chaos surrounding the NLRB. Workers, employers, and unions are stuck in a state of limbo as roughly 600 decisions issued by the board remain constitutionally suspect."

Kline continued, “The American people deserve a board that will fairly and objectively administer the law. In recent years, the board has instead advanced extreme policies harmful to rights of workers and job creators. We intend to closely follow the confirmation process and expect the nominees to demonstrate a commitment to abandon an activist agenda.”

Kline further announced that the House of Representative would vote this week on new legislation (H.R. 1120, or the Preventing Greater Uncertainty in Labor-Management Relations Act) that would require the NLRB to cease all operations until the Supreme Court rules on the legitimacy of the recess appointments.  While there is little chance that Kline’s bill will be passed in the Democratic-controlled Senate, the stridency of his remarks gives a clear indication of the Republican Party's feelings about the NLRB.

Meanwhile, Sen. Tom Harkin (D-Iowa), Chairman of Senate Committee on Heath, Education, Labor & Pensions, intends to combine the three nominations announced on Tuesday with the earlier nominations of Block and Griffin to advance a package deal to vote all the nominees at one time, according to Harkin spokeswoman Elizabeth Donovan. No date for a hearing on the five nominations has been scheduled, she added. Nor has there been any public indication that the Republican members of the committee are agreeable to Harkin’s plan, or to the larger question of whether top Republican leaders in the Senate will allow confirmation votes on any of the NLRB nominees.

Harkin’s plan has the backing of AFL-CIO President Richard Trumka and other leaders of organized labor. It’s clear, however, that the wishes of the country’s top labor leaders carry little weight with Republican leaders in the Senate, so Tuesday’s White House announcement is not expected to have any immediate impact on the paralysis at the NLRB.