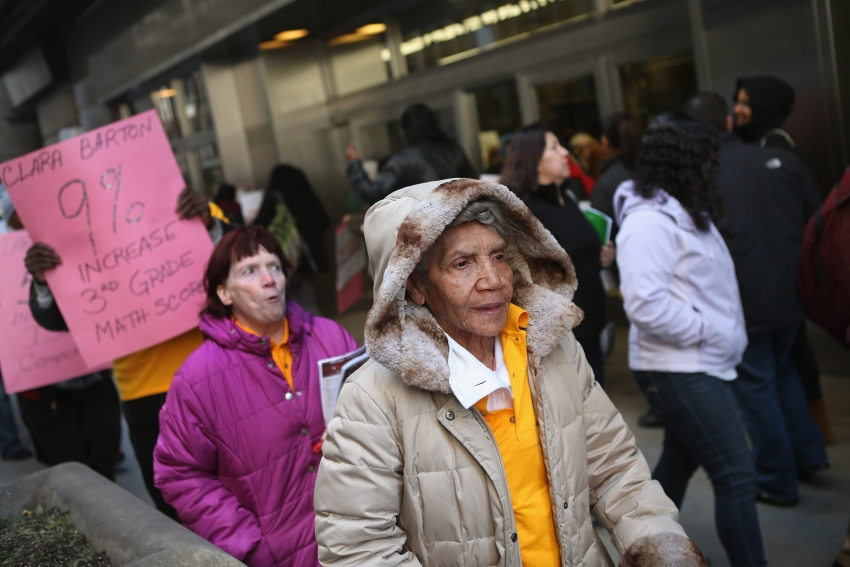 Demonstrators protest school closings outside the Chicago Public Schools (CPS) offices prior to the start of a school board meeting on April 3.   (Photo by Scott Olson/Getty Images)

Community frustration with the Chicago Public Schools is high following last month’s proposal from CPS that 53 elementary schools and one small high school be shut down, and the staff at six additional schools fired. Several aspects of CPS’s announcement have fueled the anger and confusion, including shifting rationales for the closings and a lack of clarity regarding the academic future of students impacted by the school actions.

But one reason for the intensity of the uproar may be, ironically, CPS’s public engagement process itself.

Here’s how it works. At monthly Board of Education meetings and three community hearings that CPS holds for each proposed school closing, members of the public are allowed to sign up to speak for a maximum of two minutes in front of CPS officials. The public speaker goes up to the podium and talks. CPS officials make no response. Then the next public speaker goes to the podium. Think an open mic night, or a witness testimony with no cross-examination.

Rod Estvan, an education policy specialist at the disability advocacy group Access Living, calls the format a public relations move. “They have decided that they are better off just letting people rant and rave,” says Estvan, who sits on a CPS special education advisory committee. “One bad statement in response could be a headline if there is a reporter at the meeting.”

But if silence is a PR strategy, it may be backfiring. The Chicago Teachers Union--a vocal critic of the closings—finds it insulting. “The format is designed to suppress real input from parents, students and the community,” says CTU spokeswoman Stephanie Gadlin, “They don’t even give people the courtesy of feedback.” This week, advocates associated with the Raise Your Hand parents coalition in the Austin neighborhood began to boycott hearings.

The total silence from CPS officials also appears to confound the public at large.

One Peabody teacher after another came up and charged CPS with an ulterior motive: wanting to use the shuttered building to put in a charter school run by the Noble Network. “We have heard Noble told its staff that they are looking at this building,” said Debbie Ratulowski, a sixth grade Language Arts teacher.

Is this true? Noble Network says it is not. But neither of the two CPS officials present commented on the matter. Absent a response, the Noble rumor took up 20 minutes of the hearing, or 10 different speakers. Soon enough, the rumor morphed into a larger accusation that Mayor Rahm Emanuel wants to turn over public schools to politically connected charter school operators. A community member attending the meeting had no context in which to assess whether the Noble rumor was correct, a crazed conspiracy theory, or false but perhaps generally indicative of the district’s pro-Noble and pro-charter school policies.

Other speakers at the hearing raised polite questions. Stephen Rynkiewicz, of the East Village Association, wanted to know about instructional resources for Peabody students at Otis. Rynkiewicz did not get a response from a CPS central office representative. There was no one present from Otis Elementary to respond.

Will Rynkiewicz get his question answered? Ziegler of CPS notes that the district has information on its website and an informational phone line. But Ziegler did not answer this reporter’s question about how frequently CPS got back to people who raised questions at community hearings.

Wendy Katten, co-director of the Raise Your Hand parent’s coalition, says that parents she works with occasionally get a call back from CPS after asking a question at a public meeting.  “But it is mostly a one-way street,” Katten says. “It is frustrating for parents to not have a dialogue.”

The public hearing format used by CPS is a standard one for Chicago government. What seems unique about CPS, though, is the absolute lack of recognition of each speaker. By contrast, at a Chicago Park District board or city council committee hearing, those making comments are often told the appropriate official to contact with their concern. At Chicago Housing Authority hearings, board members can respond with blank looks to the gripes of public housing tenants. However, CHA publishes written responses to questions raised at each meeting, a practice CPS does not have for its public sessions.

The School District of Philadelphia this year employed a hearing format like CPS’s after the Philadelphia School Reform Commission recommended closing 37 schools.  According to Jesse Braxton, an education organizer at Action United in Philadelphia, the public comments at Philadelphia school closing hearings also did not get responses. “It’s been an incredibly frustrating process,” Braxton says. Still, following the hearings, the School Reform Commission did reduce its closing list from 37 to 23 schools. “It’s hard to say if that was part of the plan initially or in response to the public,” Braxton says.

Braxton says that the level of dialogue between the public and the School Reform Commission depends on who is part of the five-member board. For other school systems in flux, like Detroit, board officials have actually been too talkative.

But in Emanuel’s brief two-year tenure, Chicago school officials have consistently stayed mum when confronted by the public. This was the case at the February 2012 board meeting where members voted to close or replace staff at 17 schools with minimal discussion or response to public comments. During that session some members of the public were even turned away. The board is expected to vote on the 54 closings and six staff replacements a month from now at its May board meeting.