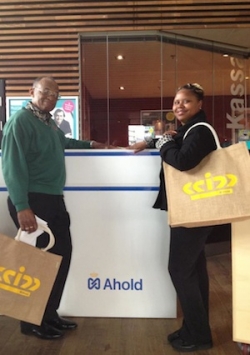 A pair of intrepid food workers from Richmond, Va., turned globalization on its head this week. They traveled to one of the centers of European finance to confront their supermarket's foreign owners on issues of workers’ rights.

Shaquana Battle and George Miles took time off from their jobs at Virginia-based Martin’s Food stores to attend the annual shareholders' meeting of Royal Ahold NV, a huge multi-national grocery retailer headquartered in the Dutch capital of Amsterdam. Ahold is the 8th-largest food retailer in the United States and, in addition to Martin's, owns Stop & Shop, Peapod and Giant Food.

On Wednesday, Battle, Miles and other labor activists spoke out from the floor of the public shareholders meeting, challenging Ahold corporate boss Dick Boer and other owners to respect the collective bargaining rights of workers in Richmond and elsewhere (see a webcast video of the meeting here).

The workers say they were met with denial and evasion.

“[The owners] responded in a very indirect way," says Battle, a five-year veteran of the company. “They never answered my questions directly–it’s kind of upsetting in that way–but they know we are here, and that we are not going away till we get a union."

Battle is a leader in a campaign by the United Food & Commercial Workers (UFCW) to organize grocery workers at Martin’s and to push back more broadly against Ahold anti-union initiatives. According to union leaders, Ahold is pursuing expansion in both the U.S. and Europe at the expense of its own workers, often by investing new money in non-union operations at the expense of established unionized workplaces. The toll often falls heavily on the unionized as pressure builds to reduce wages and benefits to the better-paid workers, they say.

For instance, Ahold moved last year to shut down a huge unionized distribution center in Jessup, Md. and transfer the work to non-union sites. UFCW Local 400, based in nearby Landover, Md., was already partnering with European unions to fight Ahold, but was unable to save the Jessup jobs.In March, distribution workers with the Dutch union group Federatie Nederlandse Vakbeweging, or FNV, went on strike against another Ahold subsidiary, Dutch supermarket chain Albert Heijn over the company's over use of temporary non-union workers. Around that time, five UFCW locals in New England protested Stop & Shop, a U.S. subsidiary of Ahold, for recruiting strikebreakers to pressure unionized workers into healthcare concessions.

For George Miles, Ahold's globalized antipathy to labor has taken the form of an anti-union drumbeat from his bosses in Richmond. “What we wanted was to be able to talk to workers in the stores” about joining Local 400, he says. “They’ve denied us the right to do that.”

At the same time, Miles, says, he and his coworkers received letters from the company at their homes arguing against forming a union. “The company feels that we don’t need a union ... they tell us that the union just wants to take our money. Well, it’s just a lie,” says Miles, who was a union member at a previous job in a shipyard. "I know what a union is, and what a union does, so I don’t need these guys to tell me."

Miles estimates that at least half of his coworkers would join the union if given a chance.

Though the American workers got a cool reception from the Dutch investors at the Wednesday meeting, Miles says, they did have some support from unionists in the room. Accompanying the Virginia workers to Amsterdam was Aaron Brenner, senior capital markets analyst for UFCW, which represents a total of about 70,000 U.S. employees of Ahold subsidiaries. Brenner spoke up in support of the workers, as did FNV representatives. In addition, support came from Giuseppe van der Helm of the Dutch Association of Investors for Sustainable Development, a local shareholder activist group interested in social and environmental issues. Also on hand from the U.S. labor movement was Lucas Benitez of the Coalition of Immokolee Workers, the Florida-based group that is campaigning to get large corporations to help finance improvements to the pay and working conditions of poor farm workers who do the work providing fresh food to companies like Ahold.

This was the third consecutive year that UFCW and FNV have been jointly attending the Ahold shareholder meetings, Brenner tells WITT. The union counts it as a positive step that senior Ahold executives are no longer surprised to see the labor activists at the meetings. Organizers want Ahold to know that a multinational coalition of labor rights groups is closely watching the company--and holding it accountable for its employment policies.