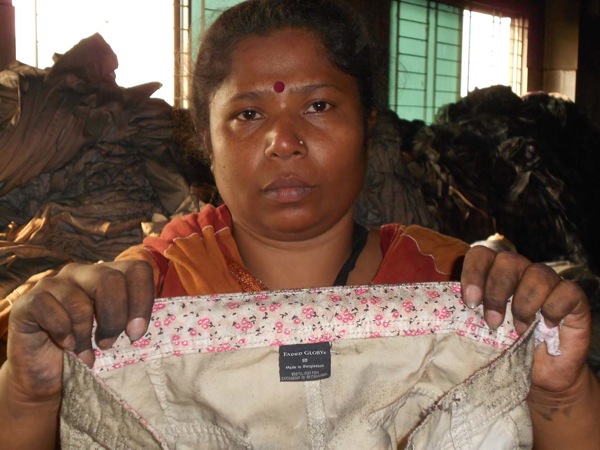 The day after the enormous fire in Bangladesh in November, Kalpona Akter holds up a garment bearing Wal-Mart's brand, "Faded Glory," which she found in the ashes inside the Tazreen factory (Photo by Bangladesh Center for Worker Solidarity)

Wal-Mart’s business model runs on the art of delusion. Clean aisles and bright decor insulate customers from the unseemly factories that produce the brand's sought-after bargains. But when Wal-Mart’s label was found plastered all over the charred remains of a massive factory fire in Bangladesh last fall, the ugliness at the root of the retail giant’s supply chain was exposed.

The company, however, continues to ignore victims’ demands for compensation, so Bangladeshi activists and their allies have brought their grievances to Wal-Mart’s doorstep in a 10-city U.S. tour.

In New York on Thursday, activists from the U.S. and Bangladesh rallied to demand compensation from Wal-Mart, Sears and other multinational companies that contracted with the Tazreen factory that burned down in November, killing some 112 people. The stop was part of the multi-city tour coordinated by anti-sweatshop and labor groups to call on corporations to "End Death Traps."

The actions reflect a broader movement for accountability in a multinational manufacturing supply chain that stretches from Latin America to the U.S. to South Asia. As Josh Eidelson reported in the Nation this week, activists are also targeting Wal-Mart over its links to systematic attacks on union activists in Nicaragua, led by one of its multinational contractors, SAE-A. In this case, as in the Bangladesh fire, Wal-Mart has distanced itself from the scandal with the same meticulous image management that it applies to its product line. In both scandals, the corporation places the blame on contractors at the bottom of the supply chain. But advocacy groups point to the direct and indirect ties from big brands like Wal-Mart and Sears to small suppliers and underregulated factories in the Global South. Multinationals use this cheap subcontracted labor to squeeze down prices while preserving a clean, consumer-friendly image.

Wal-Mart has steadfastly denied any direct culpability for the deaths at Tazreen, declined to respond to workers' demands that victims be compensated and refused to join dialogues with other companies about compensation. Meanwhile, a coalition of several European brands affiliated with Tazreen has proceeded with discussion on a $5.7 million compensation plan for victims.

But since dangerous conditions in factories are a symptom of a deeply exploitative labor structure, activists aim not only to make companies take financial responsibility for workplace disasters, but also to change the way they do business in poor countries.

The International Labor Rights Forum and Bangladeshi labor activists are pressing Wal-Mart to sign onto a new monitoring system. Unlike the current, voluntary standards for corporate social responsibility, which are overseen by organizations closely tied to industry, the new system would be overseen by independent civil society groups.

The current inspectors have many incentives to rubber-stamp inspections of their corporate “partners," and in the aftermath of the Tazreen fire, activists were outraged that they seemed to bolster Wal-mart’s claim of plausible deniability. The certification body Worldwide Responsible Accredited Production denied ever having inspected the factory. Separately, a so-called “ethical sourcing” audit posted on Tazreen Fashion's website appeared to give the supplier a stamp of approval, despite documented violations.

Sumi Abedin, a young worker on the tour who survived the Tazreen blaze by jumping out of a window, tells In These Times that workers were encouraged to deny dangerous conditions: “When auditors visited, they told us what to say. We were supposed to say that the gates are always open, that there is no excess production, that we are provided with masks--none of this is true.”

Wal-Mart has attempted to preempt pressure for stronger regulation by touting its own safety reform plan focused on tightening subcontractor safety monitoring. But the ILRF has pointed out that numerous loopholes in the plan would essentially enable Wal-Mart to self-police and thus avoid real accountability. The program also does not include an explicit role for unions and workers. By contrast, the Bangladesh Fire Safety Agreement that labor groups have drafted, which was already signed by PVH/Tommy Hilfiger and Tchibo last year (and needs four major brands to sign on to take effect), stipulates that after multiple stakeholders lay out a reform plan, unions and other non-government organizations “shall be consulted at an early stage in the remediation process if progress is not being made.”

Kalpona Akter, executive director of the Bangladesh Center for Worker Solidarity and another member of the tour, told In These Times via email that Wal-Mart’s safety initiative, like its labor practices in general, degrades the essential role of workers:.

Walmart's announcement will not save workers from dying in future fires. There is no amount of training that will add safe fire exits to factories....  If Walmart is truly serious about preventing future deaths, they must sign the existing fire safety agreement that has already been signed by PVH/Tommy Hilfiger and Tchibo. Until workers are involved in the improvement process, there will be no real change.

In the long term, Akter added, workers need both economic security and safety: “Brands need to both require their suppliers to pay living wages and respect freedom of association, as well as pay higher prices to factories in order to make possible higher wages.”

On top of the fire safety agreement to prevent future disasters, the International Labor Rights Forum has joined with Warehouse Workers United and other labor groups to push for stronger regulations at various links in the supply chain, from garment factories in Asia to warehouses in Illinois. Warehouses that serve Wal-Mart’s logistics chain are known for labor violations such as wage theft and gender discrimination.

A tighter safety system would complement other efforts to empower workers. Garment workers in Cambodia, for instance, recently used their country's legal system to negotiate a sizeable settlement with a Wal-Mart and H&M-affiliated supplier over owed wages. That kind of engagement between governments, companies and workers and labor advocates would help hold employers accountable for any workplace injustices, whether it's a deadly fire or routine wage theft.

In trying to hold Wal-Mart to its word on "corporate social responsibility," the people who sew, pack, ship and process our consumer culture have borrowed a page from Wal-Mart's branding strategy, by mass-marketing their own globalized brand of resistance.