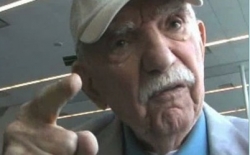 Interviewed by Steve Zeltzer at the 2009 AFL-CIO convention, Kelber berated the organization for blocking his candidacy.

Labor’s staunchest defender of rank-and-file democracy against officialdom, Harry Kelber, was still on the job early this year at age 98, sending out daily bulletins on the struggles of labor worldwide and the absence of democracy at the upper levels of the U.S. labor movement. Harry’s final missive came on March 27, just a few days before his death. When I asked him, perhaps a year ago, why he had decided to run, as a protest candidate, for the presidency of the AFL-CIO in 2013, he quipped, “You have to start somewhere!”

He did start somewhere. Growing up in East New York's slums of the early 1920s, he was stricken with diphtheria at age 9, forced into bed and made into a lifelong reader. Only after his father's untimely death did Harry learn that the elder Kelber had been a founder and executive board member of an Amalgamated Clothing Workers local, and a close follower of Joseph Schlossberg. Therein must lie a tale: an intense member of the Socialist Labor Party (headed by the uncompromising Daniel DeLeon, a Sephardic Jew from Curacao and a former Columbia University professor who became an early theorist of the Industrial Workers of the World), the syndicalist-minded Schlossberg was always a rebel, becoming a leading Labor Zionist in his own later decades.

Harry had the great good fortune to encounter both a radical high school teacher who conducted a salon for her students and the sobering reality of blue-collar work in the Depression. Like many a future labor leader of the next generation, he was cheated out of college and its career rewards by capitalism's crushing failure—but took his revenge.

A union activist among food workers in New York, Harry acquired an enemy not only among bosses but in the person of George Meany, future AFL-CIO president, then a budding building trades conservative, who blocked the young radical from his first bid at union newspaper editor. It was a valuable lesson. Harry emerged from the Second World War a labor newsman, an independent-minded ally of the Left and a vigorous opponent of the red-baiting campaign that was to end organized labor's upsurge after the crushing defeat of Henry Wallace's 1948 Progressive Party campaign. Facing the blacklist, Kelber turned himself into a printer and was still in the trade at the time of the famed 1962 newspaper strike in New York. He volunteered to become the prolific writer for the daily strike bulletin. His life had changed again.

Harry went back to school, earned a PhD in American Civilization writing on automation and the printing trade, and, at 51, began his teaching career at the New York Institute of Technology. He initiated the labor studies program at Cornell's Manhattan branch, combining the burgeoning labor arts movement with traditional union studies. From there, he worked to create the Labor College, with surprising help from middle-of-the-road New York union leader Harry Van Arsdale. Harry’s official retirement in 1984 led at first to a more educational work in the vicinity of Van Arsdale's mini-empire. And then, almost by accident and already in his mid-70s, he waded into the rougher waters of challenging the labor bureaucracy.

When Harry published, through the offices of the Trade Union Leadership Institute in 1990, a little pamphlet entitled “Why Unions Are in Trouble ... and What They Can Do About It,” he was courting trouble and he got it. He was charged with disloyalty by AFL-CIO higher-ups, attacked as an "egocentric messiah," and warned that the AFL-CIO had its own plans for global business unions. His visits to the post-Communist Eastern Bloc after 1989 were also unwelcome. Happy to see the dictatorships go, he wanted to publicize and assist a vigorous struggle against the new bosses. The AFL leaders did not like this even one little bit. Beholden to State Department funds (many said the CIA), their business union plans soon went awry and all the more unfriendly to criticism.

In 1995, the 81-year-old Harry launched his own campaign to become an AFL-CIO vice-president on a platform of democratic transformation. Meanwhile, he had become a sort of I.F. Stone for the labor movement, sending out his four-page newsletter on the bureaucracy's latest blunders, and adding more information through the Web. It was a propitious moment for reformers, a rare moment for the American labor movement, because Kirkland was forced into retirement and his planned successor never elected. Though Harry never made it to the ballot, the Palace Revolution elected John Sweeney to the AFL-CIO presidency after a close vote, ushering in a new center-Left to replace the old Right.

Harry peppered the AFL-CIO leaders with criticisms from then on, always offering sharp pointers that could be met with real constructive activity.

Somehow, though, they never seem to be. Not that he was an iconoclast only, unwilling to rejoice at the occasional victories in organizing and political campaigns. His main point was that the labor movement never seemed to build on those victories, or meet the loss of membership by the most obvious means available: to energize the rank and file by trusting in their capacities for self-leadership. The unwillingness of labor leadership (all divisions) to take on Bush's wars and then Obama’s wars, its eagerness to shuck off independent political action (unless adopting the occasional Republican could be so described), and its timidity in meeting rightwing threats to domestic liberties—all were of a piece to Kelber. Right up to the end, in late March, he was explaining why unions should oppose Keystone XL.

Harry’s 2006 autobiography, My 70 Years in the Labor Movement, had been preceded by an agitational poetry book, Septads (1981). In her Labor Notes obituary, Jane Slaughter recalls him reciting one of his ditties, from memory, while receiving an award at the group’s 2006 conference,

I wish I had a monopoly

Of the air that people breathe for free.

I’d have the world within my grasp

And I could squeeze and watch it gasp.

That was Harry, centurion and free spirit. He will be badly missed.

Paul Buhle was a pen-pal of Harry’s for at least three decades.