Fruits and Vegetables, But No Health Guarantees 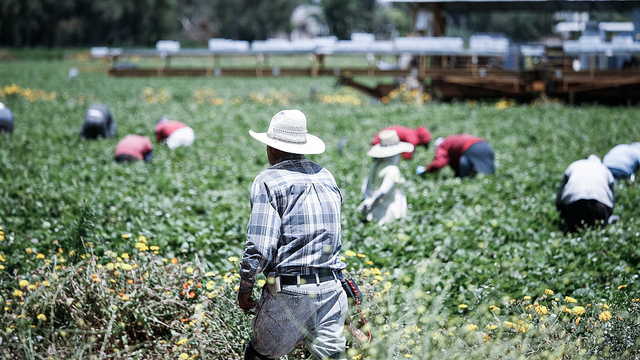 They pick the oranges that we eat to stave off a cold. But 75 percent of farmworkers in the United States don’t have health insurance, according to a study by the Kresge Foundation’s Health Program, which aims to reduce health disparities.

The report, released in March, came as Congress was in the thick of debating immigration reform legislation. The blueprint that Congress came up with includes a new “W visa” program for low-skilled jobs, which would let workers switch jobs and eventually petition for a green card, explains Daniel Costa, an immigration policy analyst at the Economic Policy Institute.

But Costa doesn’t expect there will be a requirement to provide healthcare. Farmworkers will likely only be given health insurance “if the employer provides it.”

The Kresge Foundation study goes through a long list of healthcare disparities that the United States’ mostly Mexican and Central American migrant farmworkers face. The report focuses on “hired farmworkers,” which the United States Department of Agriculture defines as workers who do not own the farm but are hired as field crop workers, nursery workers, livestock workers, farmworker supervisors and hired farm managers.

These workers are often inadequately informed about how to protect themselves from pesticide poisoning and suffer from high rates of musculoskeletal disorders. They are also especially susceptible to heatstroke.

Because many farmworkers are undocumented and ineligible for health insurance—and even when they are, employers don’t always make workers aware of it—farmworkers may not get adequate care for illnesses unrelated to their work, such as cancer, high blood pressure, anemia and diabetes.

They’re also five times more likely to die on the job than “workers in all civilian industries combined,” the report found.

In addition, few workers know much about their rights to workers’ compensation insurance, the study shows. In California, only 40 percent of undocumented male farm workers knew of the compensation program, even though they were covered under it.

Altogether, these factors—workers’ immigration status, the work itself, their lack of knowledge about U.S. laws and employers’ failure to watch out for their well-being—create a “perfect storm” of health risks, the study's authors wrote.

Yana Kunichoff is a reporter and blogger at the Chicago Reporter. Read her writing for In These Times here.