All Work, No Pay 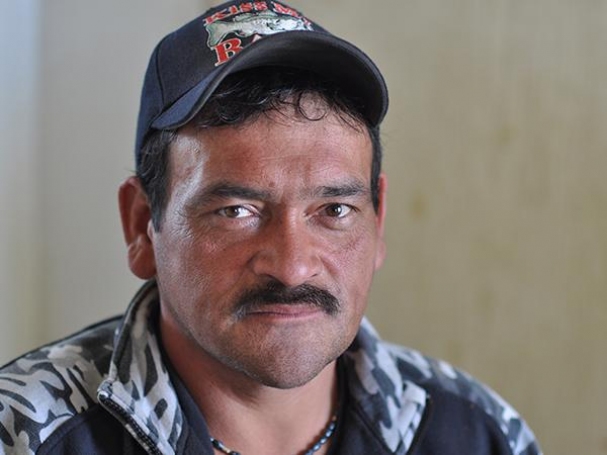 Before a bull attacked him in 2008, Joe Griego had already suffered a broken wrist and fractured fingers; he’d been kicked in the knee by a cow and pinned against the fence in a milking pen. Despite the dangers of his job, an exception in New Mexico’s Workers’ Compensation Act excludes farmworkers like Griego—but a lawsuit could change that.   (Joseph Sorrentino)

Joe Griego figures the bull was done with him in about 10 seconds. It was the longest 10 seconds of his life.

On Nov. 22, 2008, he was finishing his shift at Tres Hermanos Dairy in Veguita, south of Albuquerque, when a recalcitrant bull refused to return to its pen. When Griego turned to ask a co-worker to help, the bull took advantage.

“They say bulls are cowards,” he says. “They’ll attack when your back is turned.” The bull hit Griego at least three times, with the final blow stuffing him into the lower gap in a pipe fence.

The attack knocked out several of his teeth and left him with eight broken ribs, a fractured back, lung contusions and a dislocated shoulder. He spent about 10 days in the hospital and hasn’t been able to work since. He says the dairy’s owner gave him “like two paychecks” then said he couldn’t pay him any more. “I told him, ‘You do what you gotta do, and I’ll do what I gotta do,’” he says.

What he did was look for an attorney to take his case to the workers’ compensation court, a court specifically set up to hear cases in which injured workers are suing employers for lost wages.

Workers’ comp is essentially a no-fault insurance program designed to compensate workers for a portion of their lost wages and medical expenses when they’re injured on the job. It shifts some of the burden of caring for injured workers from taxpayers to private employers.

“Typically, if you have three employees or more, you’re required to have workers’ comp coverage,” says Ned Fuller, the director of New Mexico’s Workers’ Compensation Administration.

Workers’ comp requirements for farmworkers vary widely from state to state. According to the Farmworker Justice website, only 13 states require workers’ comp for farmworkers (the most recent data is from 2009).  For the rest of the states, it’s either optional or required but limited.

But it wasn’t until several lawyers turned him down that Griego learned about a loophole in the workers’ comp law. At the time he was injured, dairy workers who worked directly with animals weren’t covered.

“There’s an exemption for farm and ranch laborers,” Fuller explains. “Processing, bookkeeping, those kinds of things” are covered, he says. “The idea is that if you’re inside, then you’re covered by workers’ comp and if not, you’re not covered.” Ironically, that leaves the people most likely to be injured on the job—like Griego—out in the cold.

After the attack, Griego’s life slowly fell apart. Once a big, active man who played football in high school and helped coach his son’s team, he left the hospital barely able to walk and spent most of the next two months in a wheelchair. Mounting bills and an inability to work took a toll on his home life.

“My [wife] was working three jobs to keep us above water,” he says. “That didn’t last long, man. It was too hard on her.” They lost their cars and the home they’d recently bought. Finally, she left him. The separation sent Griego into a downward spiral.

“I actually gave up,” he says. “I was just so depressed. I didn’t want to be around anybody.”

Eventually, his life began to stabilize, and he connected with Maria Martinez Sanchez and Gail Evans, two attorneys at the New Mexico Center on Law and Poverty in Albuquerque. At the time, they were working with the Legislature to expand workers’ comp. When that failed, they filed a case in district court, arguing that the worker’s comp law was unconstitutional because, by excluding certain workers, it violates the state Constitution’s equal protection clause.

“The theory behind equal protection is that similarly situated individuals shouldn’t be treated dissimilarly,” Martinez Sanchez says. “It’s essentially another term for discrimination.”

The NMCLP filed the lawsuit on behalf of Griego and two other injured dairy workers in 2009. In December 2011, a district court judge ruled that the farmworker exception was, indeed, unconstitutional. Griego and his co-defendants’ cases were reopened and heard before the workers’ comp court; they recently settled.

But the fight is far from over.

The WCA has appealed, saying that because it has its own courts, the district court had no right to rule on Griego’s case. The case is expected to go before the Court of Appeals sometime this year.

But what happens to farm and ranch workers injured since the 2011 ruling?

Evans, NMCLP’s lead attorney on the case, strongly disagrees. Given the district court ruling, she says, “the [workers’ comp] law is void, period.”

For Martinez Sanchez, it isn’t some nuanced legal debate.

“To see where [Griego] was shortly after his injury—which was physically hurt, but his family intact, living in his own home with his car and his children—to where he is now as a result of an injury at work...it’s infuriating,” she says. “This man’s life has kind of crumbled.”

Meanwhile, Griego is slowly picking up the pieces. He plans to use the money from his settlement to buy a used trailer and move two of his children in with him. He’s doing odd jobs but is finding it tough.

“Something that would take somebody else four, five hours takes me all day ’cause I gotta stop,” he says. “I gotta sit down and rest...I wake up in pain...I try to deal with it.” Worse, though, is the pain of his divorce.

“A house, a car, you can replace them,” he says. “I was married for 20 years. I lost the most important thing in my life.” He admits to feeling some anger when he recalls how the Legislature considered changing the workers’ comp law in 2009.

“I went to Santa Fe with [Martinez Sanchez], and they’d just turned down the workers’ comp [legislation],” he says. (The bill died in committee.) “Three days after they turned it down for me and other people working in agriculture, they passed three laws: one to take care of horses, one for dogs, and there was one other. They protect animals more than they protect us.”