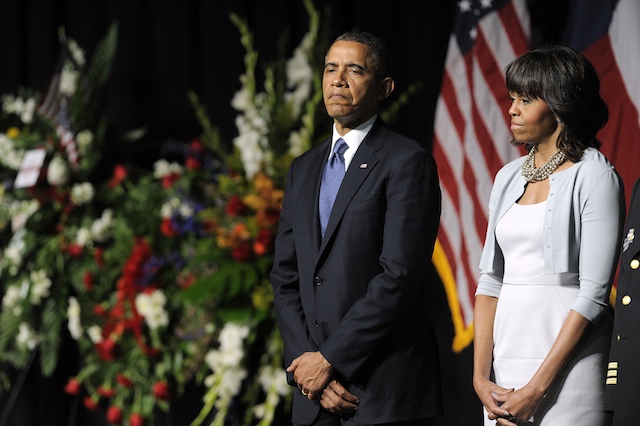 President Barack Obama and First Lady Michelle Obama attend a memorial service at Baylor University in Waco, Texas, for the firefighters who were killed in a huge blast at a Texas fertilizer plant last week.   (Jewel Samad/ AFP / Getty Images)

Today, President Obama spoke at a memorial service at Baylor University in Waco, Texas, for the 15 people who were killed in the West Chemical and Fertilizer Plant explosion. Standing in front of caskets and large photos of many of the firefighters killed, President Obama said, "To the families, the neighbors grappling with unbearable loss, we are here to say you are not alone. You are not forgotten. We may not all live here in Texas, but we're neighbors too. We're Americans too, and we stand with you."

Obama’s remarks in West come three years to the day after he gave a similar speech eulogizing the 29 miners who died in 2010’s Upper Big Branch mine explosion. But in that speech, Obama used the memorial to make the case for workplace safety.

“How can we let anyone in this country put their lives at risk by simply showing up to work; by simply pursuing the American Dream?” said the president. “We cannot bring back the 29 men we lost. They are with the Lord now. Our task, here on Earth, is to save lives from being lost in another such tragedy; to do what must be done, individually and collectively, to assure safe conditions underground–to treat our miners like they treat each other–like family.”

Today’s memorial speech in Texas, notably, did not include any such calls for increased workplace safety measures.

“After Upper Big Branch, Obama made some really great comments that made us optimistic that something could get done on this issues,” says National Council for Occupational Safety and Health Executive Director Tom O’Connor. “It’s very disappointing that he didn't even address the issue in this case. I wish I could say I was optimistic that this could lead to increased workplace safety measures, [but] I just don’t see it that way. I don’t think people will see it as a workplace safety issue.”

While O’Connor is doubtful that the West, Texas explosion will lead to any new legislation regarding workplace safety, he is more hopeful that the disaster may lead to a change in the way that multiple regulatory authorities coordinate the regulation of chemical plants.

The lack of clear regulatory authority of different agencies inspecting the West plant has been identified by many workplace safety advocates as one reason the safety problems at the plant were overlooked. At least seven different agencies were tasked with inspecting the plant, but all were inspecting for different things, and only two of those agencies—the Department of Homeland Security (DHS) and the Occupational Safety and Health Administration (OSHA)—were tasked with inspecting the plant for risks of explosion. But OSHA had not inspected the plant since 1985, and DHS had never inspected the plant, due to the plant's failure to self-report the amount of ammonium nitrate it had on site. The lack of clear regulatory authority and inspections led the New York Times to declare that the plant  “fell through regulatory cracks.”

“You’d like to think something like this could never happen, that there’d be tight oversight by some agency, but that’s not how it looks,” said Peg Seminario, director of Safety and Health for the AFL-CIO. “In reality, the regulation and oversight systems are often fragmented, so a small but potentially hazardous facility like this one in Texas can get what appears to be little scrutiny. There’s a lot we don’t know yet about what happened, but we do know there are gaps in the regulation and oversight systems. The president should provide leadership in coordinating the investigation and response from federal and state agencies.”

Members of Congress have begun calling for investigations into the lack of regulatory coordination in West, Texas. In a letter today to the General Accountability Office, Congressman George Miller (D-Calif.) and Congressman Joe Courtney (D-Conn.), called on the GAO “to assess regulatory gaps that leaves workers and nearby communities inadequately protected.”

However, without the president actively calling for a solution, workplace safety advocates remain pessimistic that anything will get done in Congress to address the problem.

“Without Obama leading, I think it would be tough for the Senate to move a bill,” says Keith Wrightson, worker safety and health sdvocate for the consumer advocacy group Public Citizen. “This is an occupational safety and health disaster of huge proportions. For the president not to refer to it as such is ridiculous.”